The most striking sign of Timothy syndrome is the co-occurrence of both syndactyly (about 0.03% of births) and long QT syndrome (1% per year) in a single patient. Other common symptoms include cardiac arrhythmia (94%), heart malformations (59%), and autism or an autism spectrum disorder (80% who survive long enough for evaluation). Facial dysmorphologies such as flattened noses also occur in about half of patients. Children with this disorder have small teeth, which due to poor enamel coating, are prone to dental cavities and often require removal. The average age of death due to complications of these symptoms is 2.5 years.[1][2][3]

Children with Timothy syndrome tend to be born via caesarean section due to fetal distress.[1][2] 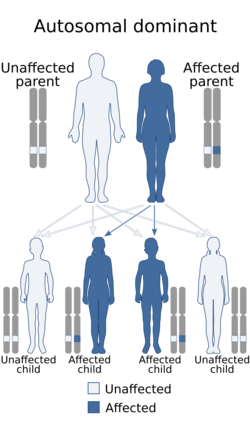 Timothy syndrome has an autosomal-dominant pattern of inheritance.

Both classical and atypical Timothy syndromes are caused by mutations in CACNA1C. These mutations are in exon 8 (atypical form) and exon 8a (classical form), an alternatively spliced exon. Exon 8a is highly expressed in the heart, brain, gastrointestinal system, lungs, immune system, and smooth muscle. Exon 8 is also expressed in these regions and its level is roughly five-fold higher than exon 8a expression.

One mutation is found in patients with classical Timothy syndrome, G406R, located just past the sixth membrane-spanning segment of domain 1 (D1S6). The conserved glycine at this position seems to be vital for proper voltage-dependent inactivation, as the mutant is lacking in this respect.[3] Atypical Timothy syndrome mutations are similar, one being the identical G406R mutation in the other splice form and the second mutation being G402S, located a few amino acids upstream. The effect of these mutations on channel function is identical to the G406R mutation in classical Timothy syndrome.[4] The lack of proper voltage-dependent inactivation in these mutants causes prolonged inward current and depolarization during cardiac action potentials. This leads to long QT syndrome and resultant arrhythmia. Because exon 8 has greater expression in the heart versus exon 8a, patients with atypical Timothy syndrome have worsened cardiac defects compared to those with the classical form. 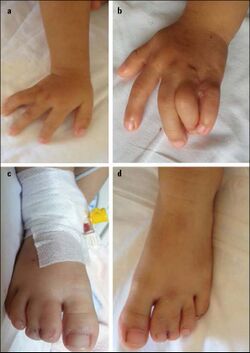 Syndactyly and other deformities are typically observed and diagnosed at birth. Long QT syndrome sometimes presents itself as a complication due to surgery to correct syndactyly. Other times, children collapse spontaneously while playing. In all cases, it is confirmed with ECG measurements. Sequencing of the CACNA1C gene further confirms the diagnosis.

Surgery is typically used to correct structural heart defects and syndactyly. Propranolol or beta-adrenergic blockers are often prescribed, as well as insertion of a pacemaker to maintain proper heart rhythm. With the characterization of Timothy syndrome mutations indicating that they cause defects in calcium currents, calcium channel blockers may be effective as a therapeutic agent.[4]

The prognosis for patients diagnosed with Timothy syndrome is very poor. Of 17 children analyzed in one study, 10 died at an average age of 2.5 years. Of those that did survive, three were diagnosed with autism, one with an autism spectrum disorder, and the last had severe delays in language development.[3] One patient with atypical Timothy syndrome was largely normal with the exception of heart arrhythmia.[4] Likewise, the mother of two Timothy syndrome patients also carried the mutation, but lacked any obvious phenotype. In both of these cases, however, the lack of severity of the disorder was due to mosaicism.

Some of the abnormalities observed in Timothy syndrome were described in the 1990s. However, it was linked with calcium channel abnormalities in 2004, and the disorder was thence named "Timothy syndrome" in honor of Katherine W. Timothy, who was among the first to identify a case and performed much of the phenotypic analysis that revealed other abnormalities.[3]