Short description: Complex number whose real and imaginary parts are both integers

In number theory, a Gaussian integer is a complex number whose real and imaginary parts are both integers. The Gaussian integers, with ordinary addition and multiplication of complex numbers, form an integral domain, usually written as Z[i].[1] This integral domain is a particular case of a commutative ring of quadratic integers. It does not have a total ordering that respects arithmetic. 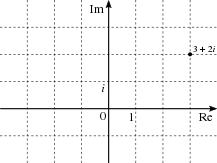 Gaussian integers as lattice points in the complex plane

The Gaussian integers are the set[1]

In other words, a Gaussian integer is a complex number such that its real and imaginary parts are both integers. Since the Gaussian integers are closed under addition and multiplication, they form a commutative ring, which is a subring of the field of complex numbers. It is thus an integral domain.

When considered within the complex plane, the Gaussian integers constitute the 2-dimensional integer lattice.

The norm of a Gaussian integer is its product with its conjugate.

The norm is multiplicative, that is, one has[2]

for every pair of Gaussian integers z, w. This can be shown directly, or by using the multiplicative property of the modulus of complex numbers. Visualization of maximal distance to some Gaussian integer

A Euclidean division algorithm takes, in the ring of Gaussian integers, a dividend a and divisor b ≠ 0, and produces a quotient q and remainder r such that

In fact, one may make the remainder smaller:

Even with this better inequality, the quotient and the remainder are not necessarily unique, but one may refine the choice to ensure uniqueness.

The choice of x – m and y – n in a semi-open interval is required for uniqueness. This definition of Euclidean division may be interpreted geometrically in the complex plane (see the figure), by remarking that the distance from a complex number ξ to the closest Gaussian integer is at most √2/2.[4]

Since the ring G of Gaussian integers is a Euclidean domain, G is a principal ideal domain, which means that every ideal of G is principal. Explicitly, an ideal I is a subset of a ring R such that every sum of elements of I and every product of an element of I by an element of R belong to I. An ideal is principal, if it consists of all multiples of a single element g, that is, it has the form

In this case, one says that the ideal is generated by g or that g is a generator of the ideal.

Every ideal I in the ring of the Gaussian integers is principal, because, if one chooses in I a nonzero element g of minimal norm, for every element x of I, the remainder of Euclidean division of x by g belongs also to I and has a norm that is smaller than that of g; because of the choice of g, this norm is zero, and thus the remainder is also zero. That is, one has x = qg, where q is the quotient.

In some circumstances, it is useful to choose, once for all, a generator for each ideal. There are two classical ways for doing that, both considering first the ideals of odd norm. If the g = a + bi has an odd norm a2 + b2, then one of a and b is odd, and the other is even. Thus g has exactly one associate with a real part a that is odd and positive. In his original paper, Gauss made another choice, by choosing the unique associate such that the remainder of its division by 2 + 2i is one. In fact, as N(2 + 2i) = 8, the norm of the remainder is not greater than 4. As this norm is odd, and 3 is not the norm of a Gaussian integer, the norm of the remainder is one, that is, the remainder is a unit. Multiplying g by the inverse of this unit, one finds an associate that has one as a remainder, when divided by 2 + 2i.

If the norm of g is even, then either g = 2kh or g = 2kh(1 + i), where k is a positive integer, and N(h) is odd. Thus, one chooses the associate of g for getting a h which fits the choice of the associates for elements of odd norm.

A Gaussian integer a + bi is a Gaussian prime if and only if either:

It follows that there are three cases for the factorization of a prime number p in the Gaussian integers:

As for every unique factorization domain, every Gaussian integer may be factored as a product of a unit and Gaussian primes, and this factorization is unique up to the order of the factors, and the replacement of any prime by any of its associates (together with a corresponding change of the unit factor).

If one chooses, once for all, a fixed Gaussian prime for each equivalence class of associated primes, and if one takes only these selected primes in the factorization, then one obtains a prime factorization which is unique up to the order of the factors. With the choices described above, the resulting unique factorization has the form

An advantage of the second choice is that the selected associates behave well under products for Gaussian integers of odd norm. On the other hand, the selected associate for the real Gaussian primes are negative integers. For example, the factorization of 231 in the integers, and with the first choice of associates is 3 × 7 × 11, while it is (–1) × (–3) × (–7) × (–11) with the second choice.

The field of Gaussian rationals is the field of fractions of the ring of Gaussian integers. It consists of the complex numbers whose real and imaginary part are both rational.

The ring of Gaussian integers is the integral closure of the integers in the Gaussian rationals.

with c and d integers. In fact a + bi is solution of the equation

and this equation has integer coefficients if and only if a and b are both integers.

Thus, greatest is meant relatively to the divisibility relation, and not for an ordering of the ring (for integers, both meanings of greatest coincide).

More technically, a greatest common divisor of a and b is a generator of the ideal generated by a and b (this characterization is valid for principal ideal domains, but not, in general, for unique factorization domains).

There are several ways for computing a greatest common divisor of two Gaussian integers a and b. When one knows the prime factorizations of a and b,

where the primes pm are pairwise non associated, and the exponents μm non-associated, a greatest common divisor is

Unfortunately, except in simple cases, the prime factorization is difficult to compute, and Euclidean algorithm leads to a much easier (and faster) computation. This algorithm consists of replacing of the input (a, b) by (b, r), where r is the remainder of the Euclidean division of a by b, and repeating this operation until getting a zero remainder, that is a pair (d, 0). This process terminates, because, at each step, the norm of the second Gaussian integer decreases. The resulting d is a greatest common divisor, because (at each step) b and r = a – bq have the same divisors as a and b, and thus the same greatest common divisor.

The residue class of a Gaussian integer a is the set

of all Gaussian integers that are congruent to a. It follows that a = b if and only if a ≡ b (mod z0).

Addition and multiplication are compatible with congruences. This means that a1 ≡ b1 (mod z0) and a2 ≡ b2 (mod z0) imply a1 + a2 ≡ b1 + b2 (mod z0) and a1a2 ≡ b1b2 (mod z0). This defines well-defined operations (that is independent of the choice of representatives) on the residue classes: 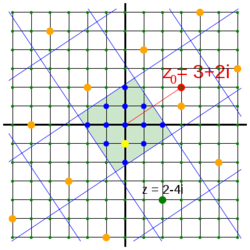 All 13 residue classes with their minimal residues (blue dots) in the square Q00 (light green background) for the modulus z0 = 3 + 2i. One residue class with z = 2 − 4i ≡ −i (mod z0) is highlighted with yellow/orange dots.

Given a modulus z0, all elements of a residue class have the same remainder for the Euclidean division by z0, provided one uses the division with unique quotient and remainder, which is described above. Thus enumerating the residue classes is equivalent with enumerating the possible remainders. This can be done geometrically in the following way.

In the complex plane, one may consider a square grid, whose squares are delimited by the two lines

with s and t integers (blue lines in the figure). These divide the plane in semi-open squares (where m and n are integers)

The semi-open intervals that occur in the definition of Qmn have been chosen in order that every complex number belong to exactly one square; that is, the squares Qmn form a partition of the complex plane. One has

This implies that every Gaussian integer is congruent modulo z0 to a unique Gaussian integer in Q00 (the green square in the figure), which its remainder for the division by z0. In other words, every residue class contains exactly one element in Q00.

The Gaussian integers in Q00 (or in its boundary) are sometimes called minimal residues because their norm are not greater than the norm of any other Gaussian integer in the same residue class (Gauss called them absolutely smallest residues).

The residue class ring modulo a Gaussian integer z0 is a field if and only if [math]\displaystyle{ z_0 }[/math] is a Gaussian prime.

If z0 is a decomposed prime or the ramified prime 1 + i (that is, if its norm N(z0) is a prime number, which is either 2 or a prime congruent to 1 modulo 4), then the residue class field has a prime number of elements (that is, N(z0)). It is thus isomorphic to the field of the integers modulo N(z0).

If, on the other hand, z0 is an inert prime (that is, N(z0) = p2 is the square of a prime number, which is congruent to 3 modulo 4), then the residue class field has p2 elements, and it is an extension of degree 2 (unique, up to an isomorphism) of the prime field with p elements (the integers modulo p).

Many theorems (and their proofs) for moduli of integers can be directly transferred to moduli of Gaussian integers, if one replaces the absolute value of the modulus by the norm. This holds especially for the primitive residue class group (also called multiplicative group of integers modulo n) and Euler's totient function. The primitive residue class group of a modulus z is defined as the subset of its residue classes, which contains all residue classes a that are coprime to z, i.e. (a,z) = 1. Obviously, this system builds a multiplicative group. The number of its elements shall be denoted by ϕ(z) (analogously to Euler's totient function φ(n) for integers n).

Euler's product formula can be derived as

where the product is to build over all prime divisors pm of z (with νm > 0). Also the important theorem of Euler can be directly transferred:

This paper not only introduced the Gaussian integers and proved they are a unique factorization domain, it also introduced the terms norm, unit, primary, and associate, which are now standard in algebraic number theory.

The distribution of the small Gaussian primes in the complex plane

Most of the unsolved problems are related to distribution of Gaussian primes in the plane.

There are also conjectures and unsolved problems about the Gaussian primes. Two of them are: