The program is based on a theorem[1] by David Malament that states that if there is a bijective map between two past and future distinguishing space times that preserves their causal structure then the map is a conformal isomorphism. The conformal factor that is left undetermined is related to the volume of regions in the spacetime. This volume factor can be recovered by specifying a volume element for each space time point. The volume of a space time region could then be found by counting the number of points in that region.

Causal sets was initiated by Rafael Sorkin who continues to be the main proponent of the program. He has coined the slogan "Order + Number = Geometry" to characterize the above argument. The program provides a theory in which space time is fundamentally discrete while retaining local Lorentz invariance.

The causal relation of a Lorentzian manifold (without closed causal curves) satisfies the first three conditions. It is the local finiteness condition that introduces spacetime discreteness.

Comparison to the continuum

Modelling spacetime as a causal set would require us to restrict attention to those causal sets that are 'manifold-like'. Given a causal set this is a difficult property to determine. 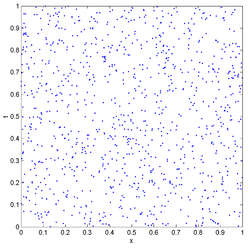 The difficulty of determining whether a causal set can be embedded into a manifold can be approached from the other direction. We can create a causal set by sprinkling points into a Lorentzian manifold. By sprinkling points in proportion to the volume of the spacetime regions and using the causal order relations in the manifold to induce order relations between the sprinkled points, we can produce a causal set that (by construction) can be faithfully embedded into the manifold.

where [math]\displaystyle{ \rho }[/math] is the density of the sprinkling.

Sprinkling points as a regular lattice would not keep the number of points proportional to the region volume.

Some geometrical constructions in manifolds carry over to causal sets. When defining these we must remember to rely only on the causal set itself, not on any background spacetime into which it might be embedded. For an overview of these constructions, see.[2] 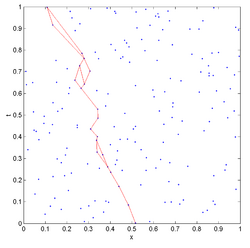 We can use this to define the notion of a geodesic between two causal set elements, provided they are order comparable, that is, causally connected (physically, this means they are time-like). A geodesic between two elements [math]\displaystyle{ x \preceq y \in C }[/math] is a chain consisting only of links such that

In general there can be more than one geodesic between two comparable elements.

Myrheim[3] first suggested that the length of such a geodesic should be directly proportional to the proper time along a timelike geodesic joining the two spacetime points. Tests of this conjecture have been made using causal sets generated from sprinklings into flat spacetimes. The proportionality has been shown to hold and is conjectured to hold for sprinklings in curved spacetimes too.

These estimators should give the correct dimension for causal sets generated by high-density sprinklings into [math]\displaystyle{ d }[/math]-dimensional Minkowski spacetime. Tests in conformally-flat spacetimes[4] have shown these two methods to be accurate.

An ongoing task is to develop the correct dynamics for causal sets. These would provide a set of rules that determine which causal sets correspond to physically realistic spacetimes. The most popular approach to developing causal set dynamics is based on the sum-over-histories version of quantum mechanics. This approach would perform a "sum-over-causal sets" by growing a causal set one element at a time. Elements would be added according to quantum mechanical rules and interference would ensure a large manifold-like spacetime would dominate the contributions. The best model for dynamics at the moment is a classical model in which elements are added according to probabilities. This model, due to David Rideout and Rafael Sorkin, is known as classical sequential growth (CSG) dynamics.[5] The classical sequential growth model is a way to generate causal sets by adding new elements one after another. Rules for how new elements are added are specified and, depending on the parameters in the model, different causal sets result.

In analogy to the path integral formulation of quantum mechanics, one approach to developing a quantum dynamics for causal sets has been to apply an action principle in the sum-over-causal sets approach. Sorkin has proposed a discrete analogue for the d'Alembertian, which can in turn be used to define the Ricci curvature scalar and thereby the Benincasa–Dowker action on a causal set.[6][7] Monte-Carlo simulations have provided evidence for a continuum phase in 2D using the Benincasa–Dowker action.[8]