Physics:Physics beyond the Standard Model

Theories attempting to explain the deficiencies of the Standard Model, Quantum field theory and general relativity

Theories that lie beyond the Standard Model include various extensions of the standard model through supersymmetry, such as the Minimal Supersymmetric Standard Model (MSSM) and Next-to-Minimal Supersymmetric Standard Model (NMSSM), and entirely novel explanations, such as string theory, M-theory, and extra dimensions. As these theories tend to reproduce the entirety of current phenomena, the question of which theory is the right one, or at least the "best step" towards a Theory of Everything, can only be settled via experiments, and is one of the most active areas of research in both theoretical and experimental physics.

Problems with the Standard Model 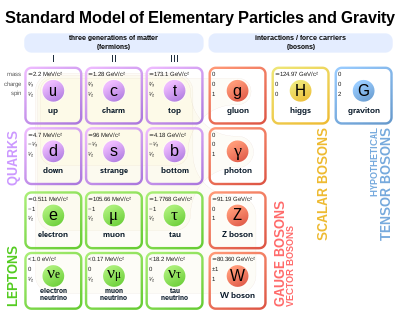 No experimental result is accepted as definitively contradicting the Standard Model at the 5 σ level,(citation?) widely considered to be the threshold of a discovery in particle physics. Because every experiment contains some degree of statistical and systemic uncertainty, and the theoretical predictions themselves are also almost never calculated exactly and are subject to uncertainties in measurements of the fundamental constants of the Standard Model (some of which are tiny and others of which are substantial), it is to be expected that some of the hundreds of experimental tests of the Standard Model will deviate from it to some extent, even if there were no new physics to be discovered.

At any given moment there are several experimental results standing that significantly differ from a Standard Model-based prediction. In the past, many of these discrepancies have been found to be statistical flukes or experimental errors that vanish as more data has been collected, or when the same experiments were conducted more carefully. On the other hand, any physics beyond the Standard Model would necessarily first appear in experiments as a statistically significant difference between an experiment and the theoretical prediction. The task is to determine which is the case.

Some of the most notable examples include the following:

Some features of the standard model are added in an ad hoc way. These are not problems per se (i.e. the theory works fine with these ad hoc features), but they imply a lack of understanding.(citation?) These ad hoc features have motivated theorists to look for more fundamental theories with fewer parameters. Some of the ad hoc features are:

The standard model has three gauge symmetries; the colour SU(3), the weak isospin SU(2), and the weak hypercharge U(1) symmetry, corresponding to the three fundamental forces. Due to renormalization the coupling constants of each of these symmetries vary with the energy at which they are measured. Around 1016 GeV these couplings become approximately equal. This has led to speculation that above this energy the three gauge symmetries of the standard model are unified in one single gauge symmetry with a simple gauge group, and just one coupling constant. Below this energy the symmetry is spontaneously broken to the standard model symmetries.[17] Popular choices for the unifying group are the special unitary group in five dimensions SU(5) and the special orthogonal group in ten dimensions SO(10).[18]

Theories that unify the standard model symmetries in this way are called Grand Unified Theories (or GUTs), and the energy scale at which the unified symmetry is broken is called the GUT scale. Generically, grand unified theories predict the creation of magnetic monopoles in the early universe,[19] and instability of the proton.[20] Neither of these have been observed, and this absence of observation puts limits on the possible GUTs.

Supersymmetry extends the Standard Model by adding another class of symmetries to the Lagrangian. These symmetries exchange fermionic particles with bosonic ones. Such a symmetry predicts the existence of supersymmetric particles, abbreviated as sparticles, which include the sleptons, squarks, neutralinos and charginos. Each particle in the Standard Model would have a superpartner whose spin differs by 1/2 from the ordinary particle. Due to the breaking of supersymmetry, the sparticles are much heavier than their ordinary counterparts; they are so heavy that existing particle colliders may not be powerful enough to produce them.

The mass terms mix neutrinos of different generations. This mixing is parameterized by the PMNS matrix, which is the neutrino analogue of the CKM quark mixing matrix. Unlike the quark mixing, which is almost minimal, the mixing of the neutrinos appears to be almost maximal. This has led to various speculations of symmetries between the various generations that could explain the mixing patterns.[32] The mixing matrix could also contain several complex phases that break CP invariance, although there has been no experimental probe of these. These phases could potentially create a surplus of leptons over anti-leptons in the early universe, a process known as leptogenesis. This asymmetry could then at a later stage be converted in an excess of baryons over anti-baryons, and explain the matter-antimatter asymmetry in the universe.[18]

Several preon models have been proposed to address the unsolved problem concerning the fact that there are three generations of quarks and leptons. Preon models generally postulate some additional new particles which are further postulated to be able to combine to form the quarks and leptons of the standard model. One of the earliest preon models was the Rishon model.[34][35][36]

To date, no preon model is widely accepted or fully verified.

Main page: Physics:Theory of everything

Theoretical physics continues to strive toward a theory of everything, a theory that fully explains and links together all known physical phenomena, and predicts the outcome of any experiment that could be carried out in principle.

In practical terms the immediate goal in this regard is to develop a theory which would unify the Standard Model with General Relativity in a theory of quantum gravity. Additional features, such as overcoming conceptual flaws in either theory or accurate prediction of particle masses, would be desired. The challenges in putting together such a theory are not just conceptual - they include the experimental aspects of the very high energies needed to probe exotic realms.

Extensions, revisions, replacements, and reorganizations of the Standard Model exist in attempt to correct for these and other issues. String theory is one such reinvention, and many theoretical physicists think that such theories are the next theoretical step toward a true Theory of Everything.[37]

Among the numerous variants of string theory, M-theory, whose mathematical existence was first proposed at a String Conference in 1995 by Edward Witten, is believed by many to be a proper "ToE" candidate, notably by physicists Brian Greene and Stephen Hawking. Though a full mathematical description is not yet known, solutions to the theory exist for specific cases.[39] Recent works have also proposed alternate string models, some of which lack the various harder-to-test features of M-theory (e.g. the existence of Calabi–Yau manifolds, many extra dimensions, etc.) including works by well-published physicists such as Lisa Randall.[40][41]