In physics, black hole thermodynamics[1] is the area of study that seeks to reconcile the laws of thermodynamics with the existence of black-hole event horizons. As the study of the statistical mechanics of black-body radiation led to the development of the theory of quantum mechanics, the effort to understand the statistical mechanics of black holes has had a deep impact upon the understanding of quantum gravity, leading to the formulation of the holographic principle.[2] 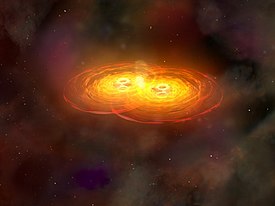 An artist's depiction of two black holes merging, a process in which the laws of thermodynamics are upheld

In 1972, Jacob Bekenstein conjectured that black holes should have an entropy,[3] where by the same year, he proposed no-hair theorems.

In 1973 Bekenstein suggested [math]\displaystyle{ \frac{\ln{2}}{0.8\pi}\approx 0.276 }[/math] as the constant of proportionality, asserting that if the constant was not exactly this, it must be very close to it. The next year, in 1974, Stephen Hawking showed that black holes emit thermal Hawking radiation[4][5] corresponding to a certain temperature (Hawking temperature).[6][7] Using the thermodynamic relationship between energy, temperature and entropy, Hawking was able to confirm Bekenstein's conjecture and fix the constant of proportionality at [math]\displaystyle{ 1/4 }[/math]:[8][9]

Although Hawking's calculations gave further thermodynamic evidence for black-hole entropy, until 1995 no one was able to make a controlled calculation of black-hole entropy based on statistical mechanics, which associates entropy with a large number of microstates. In fact, so called "no-hair" theorems[11] appeared to suggest that black holes could have only a single microstate. The situation changed in 1995 when Andrew Strominger and Cumrun Vafa calculated[12] the right Bekenstein–Hawking entropy of a supersymmetric black hole in string theory, using methods based on D-branes and string duality. Their calculation was followed by many similar computations of entropy of large classes of other extremal and near-extremal black holes, and the result always agreed with the Bekenstein–Hawking formula. However, for the Schwarzschild black hole, viewed as the most far-from-extremal black hole, the relationship between micro- and macrostates has not been characterized. Efforts to develop an adequate answer within the framework of string theory continue.

In loop quantum gravity (LQG)[nb 1] it is possible to associate a geometrical interpretation with the microstates: these are the quantum geometries of the horizon. LQG offers a geometric explanation of the finiteness of the entropy and of the proportionality of the area of the horizon.[13][14] It is possible to derive, from the covariant formulation of full quantum theory (spinfoam) the correct relation between energy and area (1st law), the Unruh temperature and the distribution that yields Hawking entropy.[15] The calculation makes use of the notion of dynamical horizon and is done for non-extremal black holes. There seems to be also discussed the calculation of Bekenstein–Hawking entropy from the point of view of loop quantum gravity. The current accepted microstate ensemble for black holes is the microcanonical ensemble. The partition function for black holes results in a negative heat capacity. In canonical ensembles, there is limitation for a positive heat capacity, whereas microcanonical ensembles can exist at a negative heat capacity. [16]

The laws of black hole mechanics

The four laws of black hole mechanics are physical properties that black holes are believed to satisfy. The laws, analogous to the laws of thermodynamics, were discovered by Jacob Bekenstein, Brandon Carter, and James Bardeen. Further considerations were made by Stephen Hawking.

Statement of the laws

The laws of black-hole mechanics are expressed in geometrized units.

The horizon has constant surface gravity for a stationary black hole.

For perturbations of stationary black holes, the change of energy is related to change of area, angular momentum, and electric charge by

The horizon area is, assuming the weak energy condition, a non-decreasing function of time:

This "law" was superseded by Hawking's discovery that black holes radiate, which causes both the black hole's mass and the area of its horizon to decrease over time.

It is not possible to form a black hole with vanishing surface gravity. That is, [math]\displaystyle{ \kappa = 0 }[/math] cannot be achieved.

Discussion of the laws

The left side, [math]\displaystyle{ dE }[/math], is the change in energy (proportional to mass). Although the first term does not have an immediately obvious physical interpretation, the second and third terms on the right side represent changes in energy due to rotation and electromagnetism. Analogously, the first law of thermodynamics is a statement of energy conservation, which contains on its right side the term [math]\displaystyle{ T dS }[/math].

The generalized second law of thermodynamics (GSL) was needed to present the second law of thermodynamics as valid. This is because the second law of thermodynamics, as a result of the disappearance of entropy near the exterior of black holes, is not useful. The GSL allows for the application of the law because now the measurement of interior, common entropy is possible. The validity of the GSL can be established by studying an example, such as looking at a system having entropy that falls into a bigger, non-moving black hole, and establishing upper and lower entropy bounds for the increase in the black hole entropy and entropy of the system, respectively.[17] One should also note that the GSL will hold for theories of gravity such as Einstein gravity, Lovelock gravity, or Braneworld gravity, because the conditions to use GSL for these can be met.[18]

However, on the topic of black hole formation, the question becomes whether or not the generalized second law of thermodynamics will be valid, and if it is, it will have been proved valid for all situations. Because a black hole formation is not stationary, but instead moving, proving that the GSL holds is difficult. Proving the GSL is generally valid would require using quantum-statistical mechanics, because the GSL is both a quantum and statistical law. This discipline does not exist so the GSL can be assumed to be useful in general, as well as for prediction. For example, one can use the GSL to predict that, for a cold, non-rotating assembly of [math]\displaystyle{ N }[/math] nucleons, [math]\displaystyle{ S_{BH} - S \gt 0 }[/math], where [math]\displaystyle{ S_{BH} }[/math] is the entropy of a black hole and [math]\displaystyle{ S }[/math] is the sum of the ordinary entropy.[17][19]

Extremal black holes[20] have vanishing surface gravity. Stating that [math]\displaystyle{ \kappa }[/math] cannot go to zero is analogous to the third law of thermodynamics, which states that the entropy of a system at absolute zero is a well defined constant. This is because a system at zero temperature exists in its ground state. Furthermore, [math]\displaystyle{ \Delta S }[/math] will reach zero at zero temperature, but [math]\displaystyle{ S }[/math] itself will also reach zero, at least for perfect crystalline substances. No experimentally verified violations of the laws of thermodynamics are known yet.

Interpretation of the laws

The four laws of black-hole mechanics suggest that one should identify the surface gravity of a black hole with temperature and the area of the event horizon with entropy, at least up to some multiplicative constants. If one only considers black holes classically, then they have zero temperature and, by the no-hair theorem,[11] zero entropy, and the laws of black-hole mechanics remain an analogy. However, when quantum-mechanical effects are taken into account, one finds that black holes emit thermal radiation (Hawking radiation) at a temperature

From the first law of black-hole mechanics, this determines the multiplicative constant of the Bekenstein–Hawking entropy, which is (in geometrized units)

which is the entropy of the black hole in Einstein's general relativity. Quantum field theory in curved spacetime can be utilized to calculate the entropy for a black hole in any covariant theory for gravity, known as the Wald entropy.[21]

Quantum gravitational corrections to the entropy

The Hawking formula for the entropy receives corrections as soon as quantum effects are taken into account. Any UV finite theory of quantum gravity should reduce at low energy to General Relativity. Works pioneered by Barvinsky and Vilkovisky [22][23][24][25] suggest as a starting point up to second order in curvature the following action, consisting of local and non-local terms:

This method was applied in 2021 by Calmet et al. [26] for Schwarzschild black holes. The Schwarzschild metric does not receive quantum corrections at second order in curvature and the entropy is

A generalisation for charged (Reissner-Nordström) black holes was subsequently carried out by Campos Delgado.[27]

While black hole thermodynamics (BHT) has been regarded as one of the deepest clues to a quantum theory of gravity, there remained some philosophical criticisms that it “is often based on a kind of caricature of thermodynamics” and "it’s unclear what the systems in BHT are supposed to be", leading to the conclusion -- "the analogy is not nearly as good as is commonly supposed".[28][29]

Gary Gibbons and Hawking have shown that black-hole thermodynamics is more general than black holes—that cosmological event horizons also have an entropy and temperature.

More fundamentally, 't Hooft and Susskind used the laws of black-hole thermodynamics to argue for a general holographic principle of nature, which asserts that consistent theories of gravity and quantum mechanics must be lower-dimensional. Though not yet fully understood in general, the holographic principle is central to theories like the AdS/CFT correspondence.[31]

There are also connections between black-hole entropy and fluid surface tension.[32]