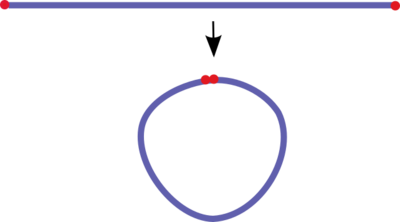 Deformation in continuum mechanics is the transformation of a body from a reference configuration to a current configuration.[1] A configuration is a set containing the positions of all particles of the body.

A deformation may be caused by external loads,[2] body forces (such as gravity or electromagnetic forces), or changes in temperature, moisture content, or chemical reactions, etc.

Strain is a description of deformation in terms of relative displacement of particles in the body that excludes rigid-body motions. Different equivalent choices may be made for the expression of a strain field depending on whether it is defined with respect to the initial or the final configuration of the body and on whether the metric tensor or its dual is considered.

In the case of elastic deformations, the response function linking strain to the deforming stress is the compliance tensor of the material.

Strain is a measure of deformation representing the displacement between particles in the body relative to a reference length.

A general deformation of a body can be expressed in the form x = F(X) where X is the reference position of material points in the body. Such a measure does not distinguish between rigid body motions (translations and rotations) and changes in shape (and size) of the body. A deformation has units of length.

We could, for example, define strain to be

where I is the identity tensor. Hence strains are dimensionless and are usually expressed as a decimal fraction, a percentage or in parts-per notation. Strains measure how much a given deformation differs locally from a rigid-body deformation.[3]

A strain is in general a tensor quantity. Physical insight into strains can be gained by observing that a given strain can be decomposed into normal and shear components. The amount of stretch or compression along material line elements or fibers is the normal strain, and the amount of distortion associated with the sliding of plane layers over each other is the shear strain, within a deforming body.[4] This could be applied by elongation, shortening, or volume changes, or angular distortion.[5]

The state of strain at a material point of a continuum body is defined as the totality of all the changes in length of material lines or fibers, the normal strain, which pass through that point and also the totality of all the changes in the angle between pairs of lines initially perpendicular to each other, the shear strain, radiating from this point. However, it is sufficient to know the normal and shear components of strain on a set of three mutually perpendicular directions.

Depending on the amount of strain, or local deformation, the analysis of deformation is subdivided into three deformation theories:

In each of these theories the strain is then defined differently. The engineering strain is the most common definition applied to materials used in mechanical and structural engineering, which are subjected to very small deformations. On the other hand, for some materials, e.g. elastomers and polymers, subjected to large deformations, the engineering definition of strain is not applicable, e.g. typical engineering strains greater than 1%,[6] thus other more complex definitions of strain are required, such as stretch, logarithmic strain, Green strain, and Almansi strain.

The Cauchy strain or engineering strain is expressed as the ratio of total deformation to the initial dimension of the material body in which the forces are being applied. The engineering normal strain or engineering extensional strain or nominal strain e of a material line element or fiber axially loaded is expressed as the change in length ΔL per unit of the original length L of the line element or fibers. The normal strain is positive if the material fibers are stretched and negative if they are compressed. Thus, we have

The true shear strain is defined as the change in the angle (in radians) between two material line elements initially perpendicular to each other in the undeformed or initial configuration. The engineering shear strain is defined as the tangent of that angle, and is equal to the length of deformation at its maximum divided by the perpendicular length in the plane of force application which sometimes makes it easier to calculate.

The extension ratio is approximately related to the engineering strain by

This equation implies that the normal strain is zero, so that there is no deformation when the stretch is equal to unity.

The stretch ratio is used in the analysis of materials that exhibit large deformations, such as elastomers, which can sustain stretch ratios of 3 or 4 before they fail. On the other hand, traditional engineering materials, such as concrete or steel, fail at much lower stretch ratios.

the logarithmic strain is obtained by integrating this incremental strain:

where e is the engineering strain. The logarithmic strain provides the correct measure of the final strain when deformation takes place in a series of increments, taking into account the influence of the strain path.[4]

The Green strain is defined as:

The Euler-Almansi strain is defined as 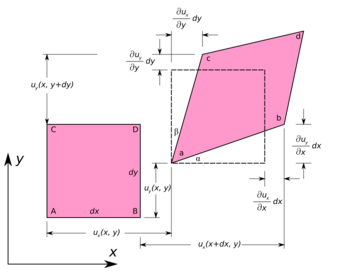 Strains are classified as either normal or shear. A normal strain is perpendicular to the face of an element, and a shear strain is parallel to it. These definitions are consistent with those of normal stress and shear stress.

Consider a two-dimensional, infinitesimal, rectangular material element with dimensions dx × dy, which, after deformation, takes the form of a rhombus. The deformation is described by the displacement field u. From the geometry of the adjacent figure we have

Similarly, the normal strain in the y- and z-directions becomes

The engineering shear strain (γxy) is defined as the change in angle between lines AC and AB. Therefore,

From the geometry of the figure, we have

For small displacement gradients we have

By interchanging x and y and ux and uy, it can be shown that γxy = γyx.

Similarly, for the yz- and xz-planes, we have

The tensorial shear strain components of the infinitesimal strain tensor can then be expressed using the engineering strain definition, γ, as

A strain field associated with a displacement is defined, at any point, by the change in length of the tangent vectors representing the speeds of arbitrarily parametrized curves passing through that point. A basic geometric result, due to Fréchet, von Neumann and Jordan, states that, if the lengths of the tangent vectors fulfil the axioms of a norm and the parallelogram law, then the length of a vector is the square root of the value of the quadratic form associated, by the polarization formula, with a positive definite bilinear map called the metric tensor.

Deformation is the change in the metric properties of a continuous body, meaning that a curve drawn in the initial body placement changes its length when displaced to a curve in the final placement. If none of the curves changes length, it is said that a rigid body displacement occurred.

There is continuity during deformation of a continuum body in the sense that:

Therefore, an affine deformation has the form

The above deformation becomes non-affine or inhomogeneous if F = F(X,t) or c = c(X,t).

A rigid body motion is a special affine deformation that does not involve any shear, extension or compression. The transformation matrix F is proper orthogonal in order to allow rotations but no reflections.

A rigid body motion can be described by 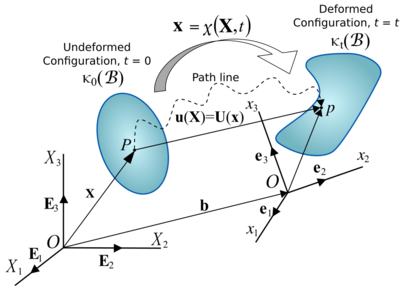 Figure 1. Motion of a continuum body.

where αJi are the direction cosines between the material and spatial coordinate systems with unit vectors EJ and ei, respectively. Thus

and the relationship between ui and UJ is then given by

It is common to superimpose the coordinate systems for the undeformed and deformed configurations, which results in b = 0, and the direction cosines become Kronecker deltas:

where F is the deformation gradient tensor.

Plane deformations are also of interest, particularly in the experimental context.

From the polar decomposition theorem, the deformation gradient, up to a change of coordinates, can be decomposed into a stretch and a rotation. Since all the deformation is in a plane, we can write[8]

where θ is the angle of rotation and λ1, λ2 are the principal stretches.

If e1 is the fixed reference orientation in which line elements do not deform during the deformation then λ1 = 1 and F·e1 = e1. Therefore,

Since the deformation is isochoric,

Then, the deformation gradient in simple shear can be expressed as

we can also write the deformation gradient as