The Leidenfrost effect is a physical phenomenon in which a liquid, close to a surface that is significantly hotter than the liquid's boiling point, produces an insulating vapor layer that keeps the liquid from boiling rapidly. Because of this repulsive force, a droplet hovers over the surface, rather than making physical contact with it. The effect is named after the German doctor Johann Gottlob Leidenfrost, who described it in A Tract About Some Qualities of Common Water.

This is most commonly seen when cooking, when drops of water are sprinkled onto a hot pan. If the pan's temperature is at or above the Leidenfrost point, which is approximately 193 °C (379 °F) for water, the water skitters across the pan and takes longer to evaporate than it would take if the water droplets had been sprinkled onto a cooler pan.

This is because at temperatures at or above the Leidenfrost point, the bottom part of the water droplet vaporizes immediately on contact with the hot pan. The resulting gas suspends the rest of the water droplet just above it, preventing any further direct contact between the liquid water and the hot pan. As steam has much poorer thermal conductivity than the metal pan, further heat transfer between the pan and the droplet is slowed down dramatically. This also results in the drop being able to skid around the pan on the layer of gas just under it.

The temperature at which the Leidenfrost effect appears is difficult to predict. Even if the volume of the drop of liquid stays the same, the Leidenfrost point may be quite different, with a complicated dependence on the properties of the surface, as well as any impurities in the liquid. Some research has been conducted into a theoretical model of the system, but it is quite complicated.[2]

The effect was also described by the eminent Victorian steam boiler designer, Sir William Fairbairn, in reference to its effect on massively reducing heat transfer from a hot iron surface to water, such as within a boiler. In a pair of lectures on boiler design,[3] he cited the work of Pierre Hippolyte Boutigny (1798-1884) and Professor Bowman of King's College, London, in studying this. A drop of water that was vaporized almost immediately at 168 °C (334 °F) persisted for 152 seconds at 202 °C (396 °F). Lower temperatures in a boiler firebox might evaporate water more quickly as a result; compare Mpemba effect. An alternative approach was to increase the temperature beyond the Leidenfrost point. Fairbairn considered this, too, and may have been contemplating the flash steam boiler, but considered the technical aspects insurmountable for the time.

The Leidenfrost point may also be taken to be the temperature for which the hovering droplet lasts longest.[4]

It has been demonstrated that it is possible to stabilize the Leidenfrost vapor layer of water by exploiting superhydrophobic surfaces. In this case, once the vapor layer is established, cooling never collapses the layer, and no nucleate boiling occurs; the layer instead slowly relaxes until the surface is cooled.[5]

Droplets of different liquids with different boiling temperatures will also exhibit a Leidenfrost effect with respect to each other and repel each other.[6]

The Leidenfrost effect has been used for the development of high sensitivity ambient mass spectrometry. Under the influence of the Leidenfrost condition, the levitating droplet does not release molecules, and the molecules are enriched inside the droplet. At the last moment of droplet evaporation, all the enriched molecules release in a short time period and thereby increase the sensitivity.[7]

A heat engine based on the Leidenfrost effect has been prototyped; it has the advantage of extremely low friction.[8] 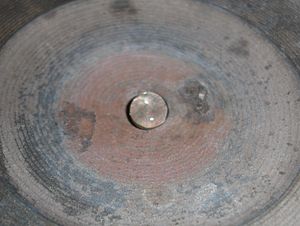 The Leidenfrost point signifies the onset of stable film boiling. It represents the point on the boiling curve where the heat flux is at the minimum and the surface is completely covered by a vapor blanket. Heat transfer from the surface to the liquid occurs by conduction and radiation through the vapour. In 1756, Leidenfrost observed that water droplets supported by the vapor film slowly evaporate as they move about on the hot surface. As the surface temperature is increased, radiation through the vapor film becomes more significant and the heat flux increases with increasing excess temperature.

The minimum heat flux for a large horizontal plate can be derived from Zuber's equation,[4]

where the properties are evaluated at saturation temperature. Zuber's constant, [math]\displaystyle{ C }[/math], is approximately 0.09 for most fluids at moderate pressures.

The heat transfer coefficient may be approximated using Bromley's equation,[4]

where [math]\displaystyle{ {{D}_{o}} }[/math] is the outside diameter of the tube. The correlation constant C is 0.62 for horizontal cylinders and vertical plates, and 0.67 for spheres. Vapor properties are evaluated at film temperature.

For stable film boiling on a horizontal surface, Berenson has modified Bromley's equation to yield,[9]

For vertical tubes, Hsu and Westwater have correlated the following equation,[9]

At excess temperatures above that at the minimum heat flux, the contribution of radiation becomes appreciable, and it becomes dominant at high excess temperatures. The total heat transfer coefficient is thus a combination of the two. Bromley has suggested the following equations for film boiling boiling from the outer surface of horizontal tubes:

The effective radiation coefficient, [math]\displaystyle{ {{h}_{rad}} }[/math] can be expressed as,

Pressure field in a Leidenfrost droplet

The equation for the pressure field in the vapor region between the droplet and the solid surface can be solved for using the standard momentum and continuity equations. For the sake of simplicity in solving, a linear temperature profile and a parabolic velocity profile are assumed within the vapor phase. The heat transfer within the vapor phase is assumed to be through conduction. With these approximations, the Navier-Stokes equation can be solved[10] to get the pressure field.

Non-volatile materials were discovered in 2015 to also exhibit a 'reactive Leidenfrost effect,' whereby solid particles were observed to float above hot surfaces and skitter around erratically.[13] Detailed characterization of the reactive Leidenfrost effect was completed for small particles of cellulose (~0.5 mm) on high temperature polished surfaces by high speed photography. Cellulose was shown to decompose to short-chain oligomers which melt and wet smooth surfaces with increasing heat transfer associated with increasing surface temperature. Above 675 °C (1,247 °F), cellulose was observed to exhibit transition boiling with violent bubbling and associated reduction in heat transfer. Liftoff of the cellulose droplet (depicted at the right) was observed to occur above about 750 °C (1,380 °F) associated with a dramatic reduction in heat transfer.[13]

The Leidenfrost effect has also been used as a means to promote chemical change of various organic liquids through their conversion by thermal decomposition into various products. Examples include decomposition of ethanol,[14] diethyl carbonate,[15] and glycerol.[16]

In Jules Verne's 1876 book Michael Strogoff, the protagonist is saved from being blinded with a hot blade by evaporating tears.[17]

In the 2009 season 7 finale of MythBusters, "Mini Myth Mayhem", the team demonstrated that a person can wet their hand and briefly dip it into molten lead without injury, using the Leidenfrost effect as the scientific basis.[18]