Short description: Set that is not a finite set 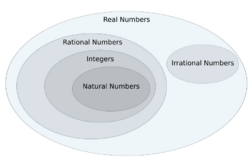 In set theory, an infinite set is a set that is not a finite set. Infinite sets may be countable or uncountable.[1][2]

If the axiom of choice holds, then a set is infinite if and only if it includes a countable infinite subset.

If an infinite set is a well-ordered set, then it must have a nonempty, nontrivial subset that has no greatest element.

If an infinite set is a well-orderable set, then it has many well-orderings which are non-isomorphic.

Infinite set theory involves proofs and definitions.[6] Important ideas discussed by Burton include how to define "elements" or parts of a set, how to define unique elements in the set, and how to prove infinity.[6] Burton also discusses proofs for different types of infinity, including countable and uncountable sets.[6] Topics used when comparing infinite and finite sets include ordered sets, cardinality, equivalency, coordinate planes, universal sets, mapping, subsets, continuity, and transcendence.[6] Candor's set ideas were influenced by trigonometry and irrational numbers. Other key ideas in infinite set theory mentioned by Burton, Paula, Narli and Rodger include real numbers such as pi, integers, and Euler's number.[6][7][8]

Both Burton and Rogers use finite sets to start to explain infinite sets using proof concepts such as mapping, proof by induction, or proof by contradiction.[6][8] Mathematical trees can also be used to understand infinite sets.[9] Burton also discusses proofs of infinite sets including ideas such as unions and subsets.[6]

In Chapter 12 of The History of Mathematics: An Introduction, Burton emphasizes how mathematicians such as Zermelo, Dedekind, Galileo, Kronecker, Cantor, and Bolzano investigated and influenced infinite set theory.[6] Potential historical influences, such as how Prussia's history in the 1800's, resulted in an increase in scholarly mathematical knowledge, including Candor's theory of infinite sets.[6]

Mathematicians including Zermelo, Dedekind, Galileo, Kronecker, Cantor, and Bolzano investigated or influenced infinite set theory. Many of these mathematicians either debated infinity or otherwise added to the ideas of infinite sets.[6]

One potential application of infinite set theory is in genetics and biology.[10]

The set of all rational numbers is a countably infinite set as there is a bijection to the set of integers.[4]