Teenage Mutant Ninja Turtles: Tournament Fighters, or Teenage Mutant Hero Turtles: Tournament Fighters in Europe, is the title of three different fighting games based on the characters the Teenage Mutant Ninja Turtles, produced by Konami for the Nintendo Entertainment System, Sega Genesis, and Super NES and released during a period between 1993 and 1994. Konami produced a different fighting game based on the franchise for each platform, featuring a differing cast of characters. 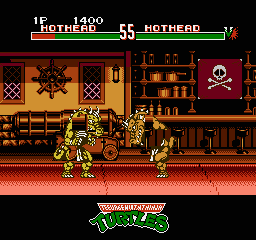 The game's single-player Story mode has the player taking control of one of the four Turtles (Leonardo, Raphael, Michaelangelo, and Donatello), as they hold a contest amongst themselves to see who is fit to take on Shredder's challenge. After defeating the first three opponents, the player proceeds to fight Casey Jones and then Hothead (a character based on the Dragon Warrior from the Teenage Mutant Ninja Turtles Adventures comics and the action figure of the same name) before the final match with the Shredder. In addition to the Story mode, the game also has two Versus modes (one against the CPU and another against a second player), as well as a four-player tournament mode. An option mode where the player can adjust the game's difficulty, continues, and speed is also available.

The gameplay follows many of the standard fighting game conventions. Battles consist of three-round matches and the first player to win two rounds is the victor. Each character has their own repertoire of basic punch and kick techniques, as well as command-based special moves. During battle, a flying monitor with Splinter's face will sometimes appear that will drop a red ball power-up at the middle of the stage that can be retrieved by either fighter. Whoever retrieves the ball power-up will be able to use it by inputting the appropriate command.

The NES version allows the player to match any character against a clone of himself, with the exception of Hothead. The game does not allow such a match under normal circumstances, but there is a way to bypass this restriction in the game's "Vs. CPU" mode. The second Hothead will be colored differently, as with all same character matches in the game, but the game will also flicker due to the large size of both characters.

A tournament has been organized and many fighters have entered, Shredder being one of them. The Turtles decide to participate in order to stop their nemesis as well as proving their strength in the tournament.

This game's controls use a four-button scheme (two punches and two kicks, weak and strong). A particular feature is the possibility to use a super special attack. In order to achieve this, the player must fill a green bar under the life bar, by hitting their opponents. Once full, the player must press the two strong attack buttons simultaneously. There is also the option of enhancing the speed of the game, making the fights more intense but also more difficult to follow.

In addition to the main and versus modes, there is a story mode in which the Turtles must rescue April O'Neil and Splinter from Karai's clutches. The Turtles must travel across the US in their Turtle Blimp, defeating other fighters and collecting information. Only the four of them can be playable whereas the other characters (as well as a turtle clone) are the opponents. There is no Mutagen Meter in story mode. There is also a watch mode, which features computer-controlled characters.

There are ten characters available, and two bosses. Aside from the Turtles and Shredder (who goes under the name of Cyber Shredder in this game), these characters are also available:

The Super NES version of Tournament Fighters was later released in Japan under the different title of Teenage Mutant Ninja Turtles: Mutant Warriors.[1]

The Mega Drive/Genesis version of Tournament Fighters was released in North America, the PAL region, and Japan around the same time as its SNES counterpart.

The Mega Drive/Genesis version uses the standard three-button controller, with only two buttons for attacking (punch and kick). To perform stronger punches or kicks, the player must hold the directional pad towards the opponent while pressing either attack buttons. The third button is used for taunting. Some of the stages in the game feature destroyable scenery that gives the player and their opponent access to new areas in the stage. As well as their special moves, each character has a 'killer' attack which is only accessible when they are close to death and the red part of the characters' life gauge at the top starts flashing. This is done by pressing the Taunt button in conjunction with a specific D-Pad motion. These moves nearly take out the other character's life gauge completely.

The game has eight playable characters, which includes the four Turtles and Casey Jones, as well as April O'Neil (whose active role differs from the versions of the character featured in other games), Ray Fillet (a character from the Teenage Mutant Ninja Turtles Adventures comics), and Sisyphus (an original character, named Musha Beetle in the Japanese version). The player can adjust their power and speed after selecting their character. The music in this version was composed by renowned video game composer Miki Higashino, in collaboration with Masanori Adachi.[2]

The main single-player mode features the turtles and their allies traveling to various planets in Dimension X, fighting against clones of themselves, as they seek to rescue Splinter from Krang. After defeating the eight clones, the player travels to the final three stages to fight against a Triceraton, Krang's Android, and Karai (in that order). The game has a two-player mode, as well as a practice mode in which the player faces the computer in a 1-round match, and a "Tournament" mode where the player must defeat 88 opponents with one life gauge.

In 2010, a YouTube user by the name of Junanagou[3] discovered a way to alter the game's data to allow the three bosses to be playable. Only accessible via a sort of "trainer" program directly from Junanagou himself, Triceraton, Krang's Android, and Karai are more or less full characters with second character palettes, complete move sets (including a usable Desperation move for Triceraton), and complete stability during gameplay. This, coupled with screenshots showing player 1 and 2 as bosses on the game's back cover[4] and in the manual, offer evidence that the bosses were initially intended to be playable, and the method to do so was removed.