A GALEX image of the spiral galaxy Messier 81 in ultraviolet light. Credit:GALEX/NASA/JPL-Caltech.

Ultraviolet line spectrum measurements (spectroscopy) are used to discern the chemical composition, densities, and temperatures of the interstellar medium, and the temperature and composition of hot young stars. UV observations can also provide essential information about the evolution of galaxies. They can be used to discern the presence of a hot white dwarf or main sequence companion in orbit around a cooler star.[3][4]

The ultraviolet universe looks quite different from the familiar stars and galaxies seen in visible light. Most stars are actually relatively cool objects emitting much of their electromagnetic radiation in the visible or near-infrared part of the spectrum. Ultraviolet radiation is the signature of hotter objects, typically in the early and late stages of their evolution. In the Earth's sky seen in ultraviolet light, most stars would fade in prominence. Some very young massive stars and some very old stars and galaxies, growing hotter and producing higher-energy radiation near their birth or death, would be visible. Clouds of gas and dust would block the vision in many directions along the Milky Way.

Space-based solar observatories such as SDO and SOHO use ultraviolet telescopes (called AIA and EIT, respectively) to view activity on the Sun and its corona. Weather satellites such as the GOES-R series also carry telescopes for observing the Sun in ultraviolet.

The Hubble Space Telescope and FUSE have been the most recent major space telescopes to view the near and far UV spectrum of the sky, though other UV instruments have flown on smaller observatories such as GALEX, as well as sounding rockets and the Space Shuttle. 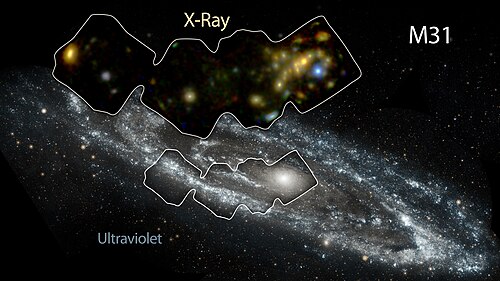