Mauna Kea in Hawaii is one of the world's premier observatory sites. Pictured is the W. M. Keck Observatory, an optical interferometer.

The following outline is provided as an overview of and topical guide to astronomy:

Astronomy – studies the universe beyond Earth, including its formation and development, and the evolution, physics, chemistry, meteorology, and motion of celestial objects (such as galaxies, planets, etc.) and phenomena that originate outside the atmosphere of Earth (such as the cosmic background radiation). Astronomy also intersect with biology, as astrobiology, studying potential life throughout the universe.

Astronomy can be described as all the following: 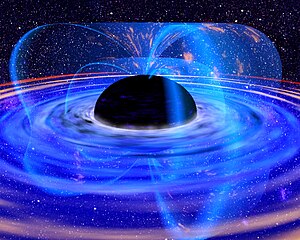 Artist's representation of a black hole.

The 48 constellations listed by Ptolemy after 150 AD

The 41 additional constellations added in the 16th and 17th centuries

1 Preceded by the Soviet space program