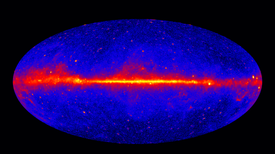 Survey of the sky at energies above 1 GeV, collected by the Fermi Gamma-ray Space Telescope in five years of observation (2009 to 2013). 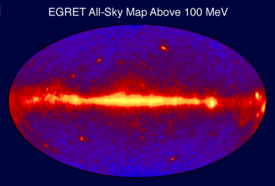 The sky at energies above 100 MeV observed by the Energetic Gamma Ray Experiment Telescope (EGRET) of the Compton Gamma Ray Observatory (CGRO) satellite (1991–2000). 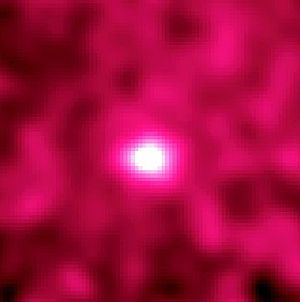 The Moon as seen by the Energetic Gamma Ray Experiment Telescope (EGRET), in gamma rays of greater than 20 MeV. These are produced by cosmic ray bombardment of its surface.[1]

Gamma-ray astronomy is the astronomical observation of gamma rays,[nb 1] the most energetic form of electromagnetic radiation, with photon energies above 100 keV. Radiation below 100 keV is classified as X-rays and is the subject of X-ray astronomy.

The mechanisms emitting gamma rays are diverse, mostly identical with those emitting X-rays but at higher energies, including electron–positron annihilation, the inverse Compton effect, and in some cases also the decay of radioactive material (gamma decay) in space[4] reflecting extreme events such as supernovae and hypernovae, and the behaviour of matter under extreme conditions, as in pulsars and blazars.

In a 18 May 2021 press release, China's Large High Altitude Air Shower Observatory (LHAASO) reported the detection of a dozen ultra-high-energy gamma rays with energies exceeding 1 peta-electron-volt (quadrillion electron-volts or PeV), including one at 1.4 PeV, the highest energy photon ever observed. The authors of the report have named the sources of these PeV gamma rays PeVatrons.

Observation of gamma rays first became possible in the 1960s. Their observation is much more problematic than that of X-rays or of visible light, because gamma-rays are comparatively rare, even a "bright" source needing an observation time of several minutes before it is even detected, and because gamma rays are difficult to focus, resulting in a very low resolution. The most recent generation of gamma-ray telescopes (2000s) have a resolution of the order of 6 arc minutes in the GeV range (seeing the Crab Nebula as a single "pixel"), compared to 0.5 arc seconds seen in the low energy X-ray (1 keV) range by the Chandra X-ray Observatory (1999), and about 1.5 arc minutes in the high energy X-ray (100 keV) range seen by High-Energy Focusing Telescope (2005).

Very energetic gamma rays, with photon energies over ~30 GeV, can also be detected by ground-based experiments. The extremely low photon fluxes at such high energies require detector effective areas that are impractically large for current space-based instruments. Such high-energy photons produce extensive showers of secondary particles in the atmosphere that can be observed on the ground, both directly by radiation counters and optically via the Cherenkov light which the ultra-relativistic shower particles emit. The Imaging Atmospheric Cherenkov Telescope technique currently achieves the highest sensitivity.

Gamma radiation in the TeV range emanating from the Crab Nebula was first detected in 1989 by the Fred Lawrence Whipple Observatory at Mt. Hopkins, in Arizona in the USA. Modern Cherenkov telescope experiments like H.E.S.S., VERITAS, MAGIC, and CANGAROO III can detect the Crab Nebula in a few minutes. The most energetic photons (up to 16 TeV) observed from an extragalactic object originate from the blazar, Markarian 501 (Mrk 501). These measurements were done by the High-Energy-Gamma-Ray Astronomy (HEGRA) air Cherenkov telescopes.

Gamma-ray astronomy observations are still limited by non-gamma-ray backgrounds at lower energies, and, at higher energy, by the number of photons that can be detected. Larger area detectors and better background suppression are essential for progress in the field.[5] A discovery in 2012 may allow focusing gamma-ray telescopes.[6] At photon energies greater than 700 keV, the index of refraction starts to increase again.[6]

Long before experiments could detect gamma rays emitted by cosmic sources, scientists had known that the universe should be producing them. Work by Eugene Feenberg and Henry Primakoff in 1948, Sachio Hayakawa and I.B. Hutchinson in 1952, and, especially, Philip Morrison in 1958[7] had led scientists to believe that a number of different processes which were occurring in the universe would result in gamma-ray emission. These processes included cosmic ray interactions with interstellar gas, supernova explosions, and interactions of energetic electrons with magnetic fields. However, it was not until the 1960s that our ability to actually detect these emissions came to pass.[8]

Most gamma rays coming from space are absorbed by the Earth's atmosphere, so gamma-ray astronomy could not develop until it was possible to get detectors above all or most of the atmosphere using balloons and spacecraft. The first gamma-ray telescope carried into orbit, on the Explorer 11 satellite in 1961, picked up fewer than 100 cosmic gamma-ray photons. They appeared to come from all directions in the Universe, implying some sort of uniform "gamma-ray background". Such a background would be expected from the interaction of cosmic rays (very energetic charged particles in space) with interstellar gas.

The first true astrophysical gamma-ray sources were solar flares, which revealed the strong 2.223 MeV line predicted by Morrison. This line results from the formation of deuterium via the union of a neutron and proton; in a solar flare the neutrons appear as secondaries from interactions of high-energy ions accelerated in the flare process. These first gamma-ray line observations were from OSO 3, OSO 7, and the Solar Maximum Mission, the latter spacecraft launched in 1980. The solar observations inspired theoretical work by Reuven Ramaty and others.[9]

Significant gamma-ray emission from our galaxy was first detected in 1967[10] by the detector aboard the OSO 3 satellite. It detected 621 events attributable to cosmic gamma rays. However, the field of gamma-ray astronomy took great leaps forward with the SAS-2 (1972) and the Cos-B (1975–1982) satellites. These two satellites provided an exciting view into the high-energy universe (sometimes called the 'violent' universe, because the kinds of events in space that produce gamma rays tend to be high-speed collisions and similar processes). They confirmed the earlier findings of the gamma-ray background, produced the first detailed map of the sky at gamma-ray wavelengths, and detected a number of point sources. However the resolution of the instruments was insufficient to identify most of these point sources with specific visible stars or stellar systems.

A discovery in gamma-ray astronomy came in the late 1960s and early 1970s from a constellation of military defense satellites. Detectors on board the Vela satellite series, designed to detect flashes of gamma rays from nuclear bomb blasts, began to record bursts of gamma rays from deep space rather than the vicinity of the Earth. Later detectors determined that these gamma-ray bursts are seen to last for fractions of a second to minutes, appearing suddenly from unexpected directions, flickering, and then fading after briefly dominating the gamma-ray sky. Studied since the mid-1980s with instruments on board a variety of satellites and space probes, including Soviet Venera spacecraft and the Pioneer Venus Orbiter, the sources of these enigmatic high-energy flashes remain a mystery. They appear to come from far away in the Universe, and currently the most likely theory seems to be that at least some of them come from so-called hypernova explosions—supernovas creating black holes rather than neutron stars.

Nuclear gamma rays were observed from the solar flares of August 4 and 7, 1972, and November 22, 1977.[11] A solar flare is an explosion in a solar atmosphere and was originally detected visually in the Sun. Solar flares create massive amounts of radiation across the full electromagnetic spectrum from the longest wavelength, radio waves, to high energy gamma rays. The correlations of the high energy electrons energized during the flare and the gamma rays are mostly caused by nuclear combinations of high energy protons and other heavier ions. These gamma rays can be observed and allow scientists to determine the major results of the energy released, which is not provided by the emissions from other wavelengths.[12] 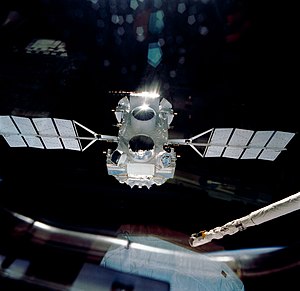 Compton released into orbit by the Space Shuttle, 1991

During its High Energy Astronomy Observatory program in 1977, NASA announced plans to build a "great observatory" for gamma-ray astronomy. The Compton Gamma Ray Observatory (CGRO) was designed to take advantage of the major advances in detector technology during the 1980s, and was launched in 1991. The satellite carried four major instruments which have greatly improved the spatial and temporal resolution of gamma-ray observations. The CGRO provided large amounts of data which are being used to improve our understanding of the high-energy processes in our Universe. CGRO was de-orbited in June 2000 as a result of the failure of one of its stabilizing gyroscopes.

BeppoSAX was launched in 1996 and deorbited in 2003. It predominantly studied X-rays, but also observed gamma-ray bursts. By identifying the first non-gamma ray counterparts to gamma-ray bursts, it opened the way for their precise position determination and optical observation of their fading remnants in distant galaxies.

The High Energy Transient Explorer 2 (HETE-2) was launched in October 2000 (on a nominally 2-year mission) and was still operational (but fading) in March 2007. The HETE-2 mission ended in March 2008.

First survey of the sky at energies above 1 GeV, collected by Fermi in three years of observation (2009 to 2011).

Swift, a NASA spacecraft, was launched in 2004 and carries the BAT instrument for gamma-ray burst observations. Following BeppoSAX and HETE-2, it has observed numerous X-ray and optical counterparts to bursts, leading to distance determinations and detailed optical follow-up. These have established that most bursts originate in the explosions of massive stars (supernovas and hypernovas) in distant galaxies. As of 2021, Swift remains operational.[15] 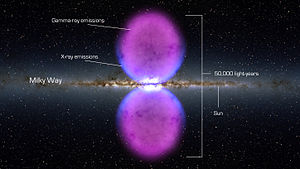 Concept of two gigantic gamma-ray bubbles at the heart of the Milky Way.

In November 2010, using the Fermi Gamma-ray Space Telescope, two gigantic gamma-ray bubbles, spanning about 25,000 light-years across, were detected at the heart of the Milky Way. These bubbles of high-energy radiation are suspected as erupting from a massive black hole or evidence of a burst of star formations from millions of years ago. They were discovered after scientists filtered out the "fog of background gamma-rays suffusing the sky". This discovery confirmed previous clues that a large unknown "structure" was in the center of the Milky Way.[16]

In April 2018, the largest catalog yet of high-energy gamma-ray sources in space was published.[17]

In 2020 some stellar diameters were measured using gamma-ray intensity interferometry.[18]