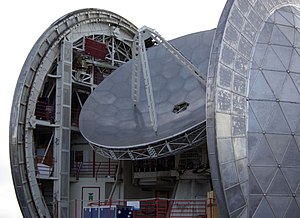 The Caltech Submillimeter Observatory at Mauna Kea Observatory was commissioned in 1988, and has a 10.4 m (34 ft) dish

Panoramic view of the Chajnantor plateau, spanning about 180 degrees from north (on the left) to south (on the right) shows the antennas of the Atacama Large Millimeter Array.

The most significant limitations to the detection of astronomical emission at submillimetre wavelengths with ground-based observatories are atmospheric emission, noise and attenuation. Like the infrared, the submillimetre atmosphere is dominated by numerous water vapour absorption bands and it is only through "windows" between these bands that observations are possible. The ideal submillimetre observing site is dry, cool, has stable weather conditions and is away from urban population centres. Only a handful of such have been sites identified. They include Mauna Kea (Hawaii, United States), the Llano de Chajnantor Observatory on the Atacama Plateau (Chile ), the South Pole, and Hanle in India (the Himalayan site of the Indian Astronomical Observatory). Comparisons show that all four sites are excellent for submillimetre astronomy, and of these sites Mauna Kea is the most established and arguably the most accessible. There has been some recent interest in high-altitude Arctic sites, particularly Summit Station in Greenland where the PWV (precipitable water vapor) measure is always better than at Mauna Kea (however Mauna Kea's equatorial latitude of 19 degrees means it can observe more of the southern skies than Greenland).[1][2]

With high-altitude balloons and aircraft, one can get above even more of the atmosphere. The BLAST experiment and SOFIA are two examples, respectively, although SOFIA can also handle near infrared observations.

Space-based observations at the submillimetre wavelengths remove the ground-based limitations of atmospheric absorption. The first submillimeter telescope in space was the Soviet BST-1M, located in the scientific equipment compartment of the Salyut-6 orbital station. It was equipped with a mirror with a diameter of 1.5 m and was intended for astrophysical research in the ultraviolet (0.2 - 0.36 microns), infrared (60 - 130 microns) and submillimeter (300 - 1000 microns) spectral regions, which are of interest to those who are interested in which makes it possible to study molecular clouds in space, as well as obtain information about the processes taking place in the upper layers of the earth's atmosphere.

The SWAS satellite was repurposed in June, 2005 to provide support for the NASA Deep Impact mission. SWAS provided water production data on the comet until the end of August 2005.

The European Space Agency launched a space-based mission known as the Herschel Space Observatory (formerly called Far Infrared and Sub-millimetre Telescope or FIRST) in 2009. Herschel deployed the largest mirror ever launched into space (until December 2021, with the launch of the near-infrared James Webb Space Telescope) and studied radiation in the far infrared and submillimetre wavebands. Rather than an Earth orbit, Herschel entered into a Lissajous orbit around L2, the second Lagrangian point of the Earth-Sun system. L2 is located approximately 1.5 million km from Earth and the placement of Herschel there lessened the interference by infrared and visible radiation from the Earth and Sun. Herschel's mission focused primarily on the origins of galaxies and galactic formation.