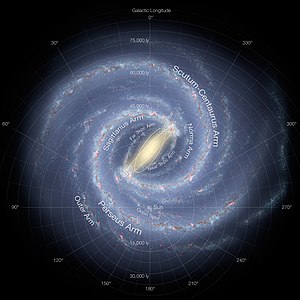 Artist's conception of the Milky Way

Galactic astronomy should not be confused with galaxy formation and evolution, which is the general study of galaxies, their formation, structure, components, dynamics, interactions, and the range of forms they take.

The Milky Way galaxy, where the Solar System belongs, is in many ways the best studied galaxy, although important parts of it are obscured from view in visible wavelengths by regions of cosmic dust. The development of radio astronomy, infrared astronomy and submillimetre astronomy in the 20th Century allowed the gas and dust of the Milky Way to be mapped for the first time.

A standard set of subcategories is used by astronomical journals to split up the subject of Galactic Astronomy:[1]