Astrology and astronomy were archaically treated together (Latin: astrologia), and were only gradually separated in Western 17th century philosophy (the "Age of Reason") with the rejection of astrology. During the later part of the medieval period, astronomy was treated as the foundation upon which astrology could operate.[1]

Since the 18th century they have come to be regarded as completely separate disciplines. Astronomy, the study of objects and phenomena originating beyond the Earth's atmosphere, is a science[2][3][4] and is a widely studied academic discipline. Astrology, which uses the apparent positions of celestial objects as the basis for the prediction of future events, is a form of divination and a pseudoscience having no scientific validity.[5][6][7]

Early science, particularly geometry and astronomy/astrology (astronomia), was connected to the divine for most medieval scholars. The compass in this 13th-century manuscript is a symbol of God's act of creation, as many believed that there was something intrinsically divine or perfect that could be found in circles.

In pre-modern times, most cultures did not make a clear distinction between the two disciplines, putting them both together as one. In ancient Babylonia, famed for its astrology, there were not separate roles for the astronomer as predictor of celestial phenomena, and the astrologer as their interpreter; both functions were performed by the same person. This overlap does not mean that astrology and astronomy were always regarded as one and the same. In Ancient Greece , pre-Socratic thinkers such as Anaximander, Xenophanes, Anaximenes, and Heraclides speculated about the nature and substance of the stars and planets. Astronomers such as Eudoxus (contemporary with Plato) observed planetary motions and cycles, and created a geocentric cosmological model that would be accepted by Aristotle. This model generally lasted until Ptolemy, who added epicycles to explain the retrograde motion of Mars. (Around 250 BC, Aristarchus of Samos postulated a proto-heliocentric theory, which would not be reconsidered for nearly two millennia (Copernicus), as Aristotle's geocentric model continued to be favored.) The Platonic school promoted the study of astronomy as a part of philosophy because the motions of the heavens demonstrate an orderly and harmonious cosmos. In the third century BC, Babylonian astrology began to make its presence felt in Greece. Astrology was criticized by Hellenistic philosophers such as the Academic Skeptic Carneades and Middle Stoic Panaetius. However, the notions of the Great Year (when all the planets complete a full cycle and return to their relative positions) and eternal recurrence were Stoic doctrines that made divination and fatalism possible.

In the Hellenistic world, the Greek words 'astrologia' and 'astronomia' were often used interchangeably, but they were conceptually not the same. Plato taught about 'astronomia' and stipulated that planetary phenomena should be described by a geometrical model. The first solution was proposed by Eudoxus. Aristotle favored a physical approach and adopted the word 'astrologia'. Eccentrics and epicycles came to be thought of as useful fictions. For a more general public, the distinguishing principle was not evident and either word was acceptable. For the Babylonian horoscopic practice, the words specifically used were 'apotelesma' and 'katarche', but otherwise it was subsumed under the aristotelian term 'astrologia'.

In his compilatory work Etymologiae, Isidore of Seville noted explicitly the difference between the terms astronomy and astrology (Etymologiae, III, xxvii) and the same distinction appeared later in the texts of Arabian writers.[8] Isidore identified the two strands entangled in the astrological discipline and called them astrologia naturalis and astrologia superstitiosa.

Astrology was widely accepted in medieval Europe as astrological texts from Hellenistic and Arabic astrologers were translated into Latin. In the late Middle Ages, its acceptance or rejection often depended on its reception in the royal courts of Europe. Not until the time of Francis Bacon was astrology rejected as a part of scholastic metaphysics rather than empirical observation. A more definitive split between astrology and astronomy in the West took place gradually in the seventeenth and eighteenth centuries, when astrology was increasingly thought of as an occult science or superstition by the intellectual elite. Because of their lengthy shared history, it sometimes happens that the two are confused with one another even today. Many contemporary astrologers, however, do not claim that astrology is a science, but think of it as a form of divination like the I-Ching, an art, or a part of a spiritual belief structure (influenced by trends such as Neoplatonism, Neopaganism, Theosophy, and Hinduism).

Astrologer–astronomer Richard of Wallingford is shown measuring an equatorium with a pair of compasses in this 14th-century work.

The primary goal of astronomy is to understand the physics of the universe. Astrologers use astronomical calculations for the positions of celestial bodies along the ecliptic and attempt to correlate celestial events (astrological aspects, sign positions) with earthly events and human affairs. Astronomers consistently use the scientific method, naturalistic presuppositions and abstract mathematical reasoning to investigate or explain phenomena in the universe. Astrologers use mystical or religious reasoning as well as traditional folklore, symbolism and superstition blended with mathematical predictions to explain phenomena in the universe. The scientific method is not consistently used by astrologers.

Astrologers practice their discipline geocentrically[9][10] and they consider the universe to be harmonious, changeless and static, while astronomers have employed the scientific method to infer that the universe is without a center and is dynamic, expanding outward per the Big Bang theory.[11]

Astrologers believe that the position of the stars and planets determine an individual's personality and future. Astronomers study the actual stars and planets, but have found no evidence supporting astrological theories. Psychologists study personality, and while there are many theories of personality, no mainstream theories in that field are based on astrology. (The Myers-Briggs personality typology, based on the works of Carl Jung, has four major categories that correspond to the astrological elements of fire, air, earth, and water. This theory of personality is used by career counselors and life coaches but not by psychologists.)

Both astrologers and astronomers see Earth as being an integral part of the universe, that Earth and the universe are interconnected as one cosmos (not as being separate and distinct from each other). However, astrologers philosophically and mystically portray the cosmos as having a supernatural, metaphysical and divine essence that actively influences world events and the personal lives of people.[12] Astronomers, as members of the scientific community, cannot use in their scientific articles explanations that are not derived from empirically reproducible conditions, irrespective of their personal convictions. 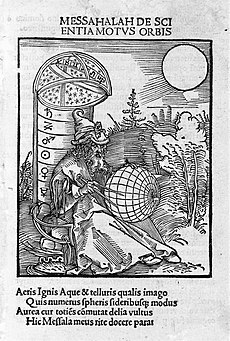 An engraving by Albrecht Dürer featuring Mashallah, from the title page of the De scientia motus orbis (Latin version with engraving, 1504). As in many medieval illustrations, the compass here is an icon of religion as well as science, in reference to God as the architect of creation.

For a long time the funding from astrology supported some astronomical research, which was in turn used to make more accurate ephemerides for use in astrology. In Medieval Europe the word Astronomia was often used to encompass both disciplines as this included the study of astronomy and astrology jointly and without a real distinction; this was one of the original Seven Liberal Arts. Kings and other rulers generally employed court astrologers to aid them in the decision making in their kingdoms, thereby funding astronomical research. University medical students were taught astrology as it was generally used in medical practice.

Astronomy and astrology diverged over the course of the 17th through 19th centuries. Copernicus didn't practice astrology (nor empirical astronomy; his work was theoretical[13]), but the most important astronomers before Isaac Newton were astrologers by profession – Tycho Brahe, Johannes Kepler, and Galileo Galilei.

Also relevant here was the development of better timekeeping instruments, initially for aid in navigation; improved timekeeping made it possible to make more exact astrological predictions—predictions which could be tested, and which consistently proved to be false.[14] By the end of the 18th century, astronomy was one of the major sciences of the Enlightenment model, using the recently codified scientific method, and was altogether distinct from astrology.