Nikolay Gennadiyevich Basov (Russian: Никола́й Генна́диевич Ба́сов; 14 December 1922 – 1 July 2001) was a Soviet physicist and educator. For his fundamental work in the field of quantum electronics that led to the development of laser and maser, Basov shared the 1964 Nobel Prize in Physics with Alexander Prokhorov and Charles Hard Townes.[2]

Basov was born in the town Usman, now in Lipetsk Oblast in 1922.[3] He finished school in 1941 in Voronezh, and was later called for military service at Kuibyshev Military Medical Academy. In 1943 he left the academy and served in the Red Army[3] participating in the Second World War with the 1st Ukrainian Front.

In the early 1950s Basov and Prokhorov developed theoretical grounds for creation of a molecular oscillator and constructed such an oscillator based on ammonia. Later this oscillator became known as maser. They also proposed a method for the production of population inversion using inhomogeneous electric and magnetic fields. Their results were presented at a national conference in 1952 and published in 1954. Basov then proceeded to the development of laser, an analogous generator of coherent light. In 1955 he designed a three-level laser, and in 1959 suggested constructing a semiconductor laser, which he built with collaborators in 1963.[1]

Basov's contributions to the development of the laser and maser, which won him the Nobel Prize in 1964, also led to new missile defense initiatives.[7]

He died on 1 July, 2001 at Moscow and was buried at Novodevichy Cemetery.

He entered politics in 1951[clarification needed] and became a member of parliament (the Soviet of the Union of the Supreme Soviet) in 1974.[3] Following U.S. President Ronald Reagan's speech on SDI in 1983, Basov signed a letter along with other Soviet scientists condemning the initiative, which was published in the New York Times.[8] In 1985 he declared the Soviet Union was capable of matching SDI proposals made by the U.S.[8] 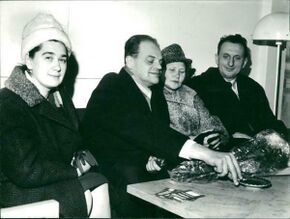 Basov and Prokhorov with wives in Stockholm in 1964 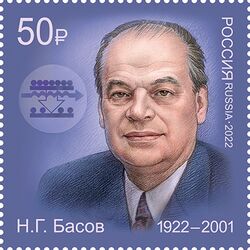