Adam Guy Riess (born December 16, 1969) is an American astrophysicist and Bloomberg Distinguished Professor at Johns Hopkins University and the Space Telescope Science Institute. He is known for his research in using supernovae as cosmological probes. Riess shared both the 2006 Shaw Prize in Astronomy and the 2011 Nobel Prize in Physics with Saul Perlmutter and Brian P. Schmidt for providing evidence that the expansion of the universe is accelerating.

Riess was born in Washington, D.C., one of three children.[1][2] He grew up in Warren, New Jersey, where his father (Naval engineer Michael Riess) owned a frozen-foods distribution company, Bistro International, and his mother (Doris Riess) worked as a clinical psychologist.[3] Michael Riess (1931–2007) immigrated to the United States with his parents (journalist, war correspondent and author Curt Riess (de) and Ilse Posnansky)[4] from Germany on the ship SS Europa (1928) in 1936.[5] Adam Riess has two sisters – Gail Saltz, a psychiatrist, and Holly Hagerman, an artist. Riess married Nancy Joy Schondorf in 1998.

He attended Watchung Hills Regional High School, graduating in the class of 1988.[7] He also attended the prestigious New Jersey Governor's School in the Sciences in 1987. Riess then graduated from The Massachusetts Institute of Technology in 1992 where he was a member of the Phi Delta Theta fraternity. He received his PhD from Harvard University in 1996; it resulted in measurements of over twenty new Type Ia supernovae and a method to utilize Type Ia supernovae as accurate distance indicators by correcting for intervening dust and intrinsic inhomogeneities. Riess's PhD thesis was supervised by Robert Kirshner and William H. Press and won the Robert J. Trumpler Award in 1999 for PhD theses of unusual importance to astronomy.[8]

Riess was a Miller Fellow at the University of California, Berkeley from 1996 through 1999, during which period his first seminal paper on the discovery of an accelerating universe was published.[9] In 1999, he moved to the Space Telescope Science Institute and took up his current position at Johns Hopkins University in 2006. He also sits on the selection committee for the Astronomy award, given under the auspices of the Shaw Prize. In July 2016, Riess was named a Bloomberg Distinguished Professor at Johns Hopkins University for his accomplishments as an interdisciplinary researcher and excellence in teaching the next generation of scholars.[9] The Bloomberg Distinguished Professorships were established in 2013 by a gift from Michael Bloomberg.[10]

Riess jointly led the study with Brian Schmidt in 1998 for the High-z Supernova Search Team which first reported evidence that the universe's expansion rate is now accelerating through monitoring of Type Ia supernovae. The team's observations were contrary to the current theory that the expansion of the universe was slowing down; instead, by monitoring the color shifts in the light from supernovae from Earth, they discovered that these billion-year old novae were still accelerating.[11] This result was also found nearly simultaneously by the Supernova Cosmology Project, led by Saul Perlmutter.[11] The corroborating evidence between the two competing studies led to the acceptance of the accelerating universe theory, and initiated new research to understand the nature of the universe, such as the existence of dark energy.[11] The discovery of the accelerating universe was named 'Breakthrough of the Year' by Science magazine in 1998,[12] and Riess was jointly awarded the 2011 Nobel Prize in Physics along with Schmidt and Perlmutter for their groundbreaking work.[11]

In the book The 4 Percent Universe, scientific journalist Richard Panek claims that Riess made improper use of the supernova data collected by the Calán/Tololo Survey, publishing them prior to the authors and without their permission.[13] However, coincident publication dates and acknowledgements in one of these publications contradict this claim.[14][15] 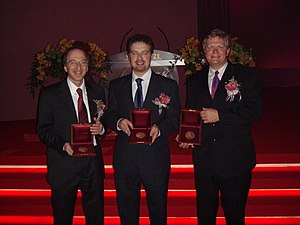 Saul Perlmutter, Riess, and Brian P. Schmidt being awarded the 2006 Shaw Prize in Astronomy. The trio would later be awarded the 2011 Nobel Prize in Physics.

In 2006, he shared the $1 million Shaw Prize in Astronomy with Saul Perlmutter and Brian P. Schmidt for contributions to the discovery of the acceleration of the universe.[16]

Schmidt and all the members of the High-Z Team (as defined by the co-authors of Riess et al. 1998) shared the 2007 Gruber Cosmology Prize, a $500,000 award, with the Supernova Cosmology Project (the set defined by the co-authors of Perlmutter et al. 1999) for their discovery of the accelerating expansion of the universe. Riess was the winner of MacArthur "Genius" Grant in 2008. He was also elected in 2009 to the National Academy of Sciences.[17]

Along with Perlmutter and Schmidt, he was awarded the 2011 Nobel Prize in Physics for his contributions to the discovery of the acceleration of the expansion of the universe.[16]

Riess, along with Brian P. Schmidt, and the High-Z Supernova Search Team shared in the 2015 Breakthrough Prize in Fundamental Physics.

In 2012, Riess received the Golden Plate Award of the American Academy of Achievement.[18]

In 2020, Riess was made fellow of the American Astronomical Society.[19]

Riess has more than 87,000 citations in Google Scholar and an h-index of 99. His most cited work, "Observational evidence from supernovae for an accelerating universe and a cosmological constant," has been cited over 20,000 times.[21] Riess has been among the top 1% most cited in the world for subject field and year of publication in the Thomson Reuters Highly Cited Researchers reports for multiple years, including 2016 and 2020.[22][23]