Vitaly Lazarevich Ginzburg, ForMemRS[1] (Russian: Вита́лий Ла́заревич Ги́нзбург; 4 October 1916 – 8 November 2009) was a Russian theoretical physicist who was honored with the Nobel Prize in Physics in 2003, together with Alexei Abrikosov and Anthony Leggett for their "pioneering contributions to the theory of superconductors and superfluids."[2]

His career in physics was spent in Soviet Union and was one of the leading Soviet scientists in the Soviet Union's atomic bomb project, working towards designs of the thermonuclear devices.[3][4] He became a member of the Russian Academy of Sciences and succeeded Igor Tamm as head of the Department of Theoretical Physics of the Lebedev Physical Institute of the Russian Academy of Sciences (FIAN). In his later life, Ginzburg become an outspoken atheist and was critical of clergy's influence in Russian society.[5]

Vitaly Ginzburg was born to a Jewish family in Moscow on 4 October 1916— the son of an engineer, Lazar Yefimovich Ginzburg, and a doctor, Augusta Wildauer who was a graduate from the Physics Faculty of Moscow State University in 1938. After attending his mother's alma mater, he defended his qualifications of the candidate's (Kandidat Nauk) dissertation in 1940, and his comprehensive thesis for the doctor's (Doktor Nauk) qualification in 1942. In 1944, he became a member of the Communist Party of the Soviet Union. Among his achievements are a partially phenomenological theory of superconductivity, the Ginzburg–Landau theory, developed with Lev Landau in 1950;[6] the theory of electromagnetic wave propagation in plasmas (for example, in the ionosphere); and a theory of the origin of cosmic radiation. He is also known to biologists as being part of the group of scientists that helped bring down the reign of the politically connected anti-Mendelian agronomist Trofim Lysenko, thus allowing modern genetic science to return to the USSR.[7]

In 1937, Ginzburg married Olga Zamsha. In 1946, he married his second wife, Nina Ginzburg (nee Yermakova), who had spent more than a year in custody on fabricated charges of plotting to assassinate the Soviet leader Joseph Stalin .[8]

Ginzburg was the editor-in-chief of the scientific journal Uspekhi Fizicheskikh Nauk.[4] He also headed the Academic Department of Physics and Astrophysics Problems, which Ginzburg founded at the Moscow Institute of Physics and Technology in 1968.[9]

Ginzburg identified as a secular Jew, and following the collapse of communism in the former Soviet Union, he was very active in Jewish life, especially in Russia, where he served on the board of directors of the Russian Jewish Congress. He is also well known for fighting anti-Semitism and supporting the state of Israel.[10]

In the 2000s (decade), Ginzburg was politically active, supporting the Russian liberal opposition and human rights movement.[11] He defended Igor Sutyagin and Valentin Danilov against charges of espionage put forth by the authorities. On 2 April 2009, in an interview to the Radio Liberty Ginzburg denounced the FSB as an institution harmful to Russia and the ongoing expansion of its authority as a return to Stalinism.[12]

Ginzburg was an avowed atheist, both under the militantly atheist Soviet government and in post-Communist Russia when religion made a strong revival.[14] He criticized clericalism in the press and wrote several books devoted to the questions of religion and atheism.[15][16] Because of this, some Orthodox Christian groups denounced him and said no science award could excuse his verbal attacks on the Russian Orthodox Church.[17] He was one of the signers of the Open letter to the President Vladimir V. Putin from the Members of the Russian Academy of Sciences against clericalisation of Russia.

A spokeswoman for the Russian Academy of Sciences announced that Ginzburg died in Moscow on 8 November 2009 from cardiac arrest.[3][18] He had been suffering from ill health for several years,[18] and three years before his death said "In general, I envy believers. I am 90, and [am] being overcome by illnesses. For believers, it is easier to deal with them and with life's other hardships. But what can be done? I cannot believe in resurrection after death."[18]

Prime Minister of Russia Vladimir Putin sent his condolences to Ginzburg's family, saying "We bid farewell to an extraordinary personality whose outstanding talent, exceptional strength of character and firmness of convictions evoked true respect from his colleagues".[18] President of Russia Dmitry Medvedev, in his letter of condolences, described Ginzburg as a "top physicist of our time whose discoveries had a huge impact on the development of national and world science."[19]

Ginzburg was buried on 11 November in the Novodevichy Cemetery in Moscow, the resting place of many famous politicians, writers and scientists of Russia.[3] 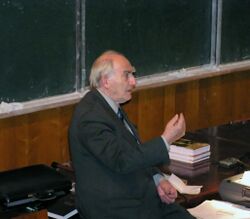