Yoichiro Nambu (南部 陽一郎, Nanbu Yōichirō, 18 January 1921 – 5 July 2015) was a Japanese-American physicist and professor at the University of Chicago.[1] Known for his contributions to the field of theoretical physics, he was awarded half of the Nobel Prize in Physics in 2008 for the discovery in 1960 of the mechanism of spontaneous broken symmetry in subatomic physics, related at first to the strong interaction's chiral symmetry and later to the electroweak interaction and Higgs mechanism.[2] The other half was split equally between Makoto Kobayashi and Toshihide Maskawa "for the discovery of the origin of the broken symmetry which predicts the existence of at least three families of quarks in nature."[2]

Nambu was born in Tokyo, Japan, in 1921. After graduating from the then Fukui Secondary High School in Fukui City, he enrolled in the Imperial University of Tokyo and studied physics. He received his Bachelor of Science in 1942 and Doctorate of Science in 1952.[2] In 1949 he was appointed to associate professor at Osaka City University[3] and promoted to professorship the next year at the age of 29.[2] 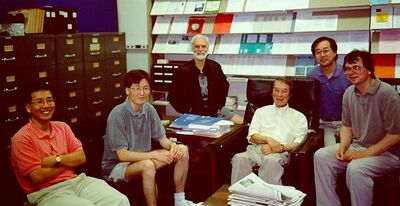 Nambu (white shirt) and associates in 1996

Nambu proposed the "color charge" of quantum chromodynamics,[7] having done early work on spontaneous symmetry breaking in particle physics,[8] and having discovered that the dual resonance model could be explained as a quantum mechanical theory of strings.[9][10] He was accounted as one of the founders of string theory.[11]

After more than fifty years as a professor, he was Henry Pratt Judson Distinguished Service Professor emeritus at the University of Chicago's Department of Physics and Enrico Fermi Institute.[12][13]

The Nambu-Goto action in string theory is named after Nambu and Tetsuo Goto. Also, massless bosons arising in field theories with spontaneous symmetry breaking are sometimes referred to as Nambu–Goldstone bosons.[14][15]