Lead zirconate titanate is an inorganic compound with the chemical formula Pb[ZrxTi1−x]O3 (0≤x≤1). Also called lead zirconium titanate, it is a ceramic perovskite material that shows a marked piezoelectric effect, meaning that the compound changes shape when an electric field is applied. It is used in a number of practical applications such as ultrasonic transducers and piezoelectric resonators. It is a white to off-white solid.

Lead zirconium titanate was first developed around 1952 at the Tokyo Institute of Technology. Compared to barium titanate, a previously discovered metallic oxide-based piezoelectric material, lead zirconium titanate exhibits greater sensitivity and has a higher operating temperature. Piezoelectric ceramics are chosen for applications because of their physical strength, chemically inertness and their relatively low manufacturing cost. PZT ceramic is the most commonly used piezoelectric ceramic because it has an even greater sensitivity and higher operating temperature than other piezo ceramics.[1]

Being piezoelectric, lead zirconate titanate develops a voltage (or potential difference) across two of its faces when compressed (useful for sensor applications), and physically changes shape when an external electric field is applied (useful for actuator applications). The relative permittivity of lead zirconate titanate can range from 300 to 20000, depending upon orientation and doping.(citation?)

Being pyroelectric, this material develops a voltage difference across two of its faces under changing temperature conditions; consequently, lead zirconate titanate can be used as a heat sensor. Lead zirconate titanate is also ferroelectric, which means that it has a spontaneous electric polarization (electric dipole) that can be reversed in the presence of an electric field.

The material features an extremely large relative permittivity at the morphotropic phase boundary (MPB) near x = 0.52.[2]

Some formulations are ohmic until at least 250 kV/cm (25 MV/m), after which current grows exponentially with field strength before reaching avalanche breakdown; but lead zirconate titanate exhibits time-dependent dielectric breakdown — breakdown may occur under constant-voltage stress after minutes or hours, depending on voltage and temperature, so its dielectric strength depends on the time scale over which it is measured.[3] Other formulations have dielectric strengths measured in the 8–16 MV/m range.[4] 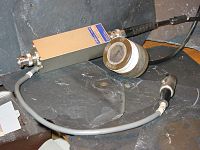 Lead zirconate titanate is used to make ultrasound transducers and other sensors and actuators, as well as high-value ceramic capacitors and FRAM chips. Lead zirconate titanate is also used in the manufacture of ceramic resonators for reference timing in electronic circuitry. In 1975 Sandia National Laboratories created anti-flash goggles featuring PZLT to protect aircrew from burns and blindness in case of a nuclear explosion.[5] The PLZT lenses could turn opaque in less than 150 microseconds.