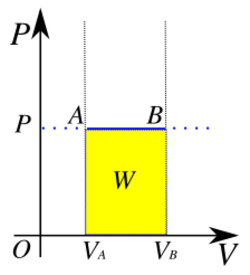 where W is work, U is internal energy, and Q is heat.[1] Pressure-volume work by the closed system is defined as:

where Δ means change over the whole process, whereas d denotes a differential. Since pressure is constant, this means that

with R representing the gas constant, and n representing the amount of substance, which is assumed to remain constant (e.g., there is no phase transition during a chemical reaction). According to the equipartition theorem,[2] the change in internal energy is related to the temperature of the system by

where cV, m is molar heat capacity at a constant volume.

Substituting the last two equations into the first equation produces:

where cP is molar heat capacity at a constant pressure.

To find the molar specific heat capacity of the gas involved, the following equations apply for any general gas that is calorically perfect. The property γ is either called the adiabatic index or the heat capacity ratio. Some published sources might use k instead of γ.

The values for γ are γ = 7/5 for diatomic gases like air and its major components, and γ = 5/3 for monatomic gases like the noble gases. The formulas for specific heats would reduce in these special cases:

The motivation for the specific sign conventions of thermodynamics comes from early development of heat engines. When designing a heat engine, the goal is to have the system produce and deliver work output. The source of energy in a heat engine, is a heat input.

An isochoric process is described by the equation Q = ΔU. It would be convenient to have a similar equation for isobaric processes. Substituting the second equation into the first yields

The quantity U + pV is a state function so that it can be given a name. It is called enthalpy, and is denoted as H. Therefore, an isobaric process can be more succinctly described as

Enthalpy and isochoric specific heat capacity are very useful mathematical constructs, since when analyzing a process in an open system, the situation of zero work occurs when the fluid flows at constant pressure. In an open system, enthalpy is the quantity which is useful to use to keep track of energy content of the fluid.

The reversible expansion of an ideal gas can be used as an example of an isobaric process.[3] Of particular interest is the way heat is converted to work when expansion is carried out at different working gas/surrounding gas pressures. 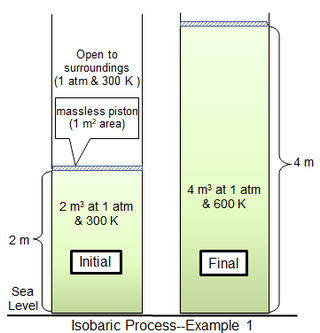 This picture has been created using open access software.

In the first process example, a cylindrical chamber 1 m2 in area encloses 81.2438 mol of an ideal diatomic gas of molecular mass 29 g mol−1 at 300 K. The surrounding gas is at 1 atm and 300 K, and separated from the cylinder gas by a thin piston. For the limiting case of a massless piston, the cylinder gas is also at 1 atm pressure, with an initial volume of 2 m3. Heat is added slowly until the gas temperature is uniformly 600 K, after which the gas volume is 4 m3 and the piston is 2 m above its initial position. If the piston motion is sufficiently slow, the gas pressure at each instant will have practically the same value (psys = 1 atm) throughout.

The increase in internal energy is

Here, work is entirely consumed by expansion against the surroundings. Of the total heat applied (709.3 kJ), the work performed (202.7 kJ) is about 28.6% of the supplied heat. 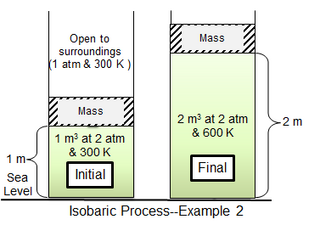 This example has been created by me independently on an open software.

The second process example is similar to the first, except that the massless piston is replaced by one having a mass of 10,332.2 kg, which doubles the pressure of the cylinder gas to 2 atm. The cylinder gas volume is then 1 m3 at the initial 300 K temperature. Heat is added slowly until the gas temperature is uniformly 600 K, after which the gas volume is 2 m3 and the piston is 1 m above its initial position. If the piston motion is sufficiently slow, the gas pressure at each instant will have practically the same value (psys = 2 atm) throughout.

Since enthalpy and internal energy are independent of pressure,

As in the first example, about 28.6% of the supplied heat is converted to work. But here, work is applied in two different ways: partly by expanding the surrounding atmosphere and partly by lifting 10,332.2 kg a distance h of 1 m.[5]

Thus, half the work lifts the piston mass (work of gravity, or “useable” work), while the other half expands the surroundings.

The results of these two process examples illustrate the difference between the fraction of heat converted to usable work (mgΔh) vs. the fraction converted to pressure-volume work done against the surrounding atmosphere. The usable work approaches zero as the working gas pressure approaches that of the surroundings, while maximum usable work is obtained when there is no surrounding gas pressure. The ratio of all work performed to the heat input for ideal isobaric gas expansion is

A given quantity (mass m) of gas in a changing volume produces a change in density ρ. In this context the ideal gas law is written

where T is thermodynamic temperature and M is molar mass. When R and M are taken as constant, then pressure P can stay constant as the density-temperature quadrant (ρ,T) undergoes a squeeze mapping.[6]