Short description: Younger of two epochs into which the Cretaceous geological period is divided

The Late Cretaceous (100.5–66 Ma) is the younger of two epochs into which the Cretaceous Period is divided in the geologic time scale. Rock strata from this epoch form the Upper Cretaceous Series. The Cretaceous is named after the white limestone known as chalk, which occurs widely in northern France and is seen in the white cliffs of south-eastern England, and which dates from this time.[3]

During the Late Cretaceous, the climate was warmer than present, although throughout the period a cooling trend is evident.[4] The tropics became restricted to equatorial regions and northern latitudes experienced markedly more seasonal climatic conditions.[4]

Due to plate tectonics, the Americas were gradually moving westward, causing the Atlantic Ocean to expand. The Western Interior Seaway divided North America into eastern and western halves; Appalachia and Laramidia.[4] India maintained a northward course towards Asia.[4] In the Southern Hemisphere, Australia and Antarctica seem to have remained connected and began to drift away from Africa and South America.[4] Europe was an island chain.[4] Populating some of these islands were endemic dwarf dinosaur species.[4]

Birds became increasingly common, diversifying in a variety of enantiornithe and ornithurine forms. Early Neornithes such as Vegavis[6] co-existed with forms as bizarre as Yungavolucris and Avisaurus.[7] Though mostly small, marine Hesperornithes became relatively large and flightless, adapted to life in the open sea.[8]

Though primarily represented by azhdarchids, other forms like pteranodontids, tapejarids (Caiuajara and Bakonydraco), nyctosaurids and uncertain forms (Piksi, Navajodactylus) are also present. Historically, it has been assumed that pterosaurs were in decline due to competition with birds, but it appears that neither group overlapped significantly ecologically, nor is it particularly evident that a true systematic decline was ever in place, especially with the discovery of smaller pterosaur species.[9]

Several old mammal groups began to disappear, with the last eutriconodonts occurring in the Campanian of North America.[10] In the northern hemisphere, cimolodont, multituberculates, metatherians and eutherians were the dominant mammals, with the former two groups being the most common mammals in North America. In the southern hemisphere there was instead a more complex fauna of dryolestoids, gondwanatheres and other multituberculates and basal eutherians; monotremes were presumably present, as was the last of the haramiyidans, Avashishta.

True placentals evolved only at the very end of the epoch; the same can be said for true marsupials. Instead, nearly all known eutherian and metatherian fossils belong to other groups. [11]

In the seas, mosasaurs suddenly appeared and underwent a spectacular evolutionary radiation. Modern sharks also appeared and giant-penguin-like polycotylid plesiosaurs (3 meters long) and huge long-necked elasmosaurs (13 meters long) also diversified. These predators fed on the numerous teleost fishes, which in turn evolved into new advanced and modern forms (Neoteleostei). Ichthyosaurs and pliosaurs, on the other hand, became extinct during the Cenomanian-Turonian anoxic event.

Near the end of the Cretaceous Period, flowering plants diversified. In temperate regions, familiar plants like magnolias, sassafras, roses, redwoods, and willows could be found in abundance.[4]

The Cretaceous–Paleogene extinction event was a large-scale mass extinction of animal and plant species in a geologically short period of time, approximately 66 million years ago (Ma). It is widely known as the K–T extinction event and is associated with a geological signature, usually a thin band dated to that time and found in various parts of the world, known as the Cretaceous–Paleogene boundary (K–T boundary). K is the traditional abbreviation for the Cretaceous Period derived from the German name Kreidezeit, and T is the abbreviation for the Tertiary Period (a historical term for the period of time now covered by the Paleogene and Neogene periods). The event marks the end of the Mesozoic Era and the beginning of the Cenozoic Era.[12] "Tertiary" being no longer recognized as a formal time or rock unit by the International Commission on Stratigraphy, the K-T event is now called the Cretaceous—Paleogene (or K-Pg) extinction event by many researchers. 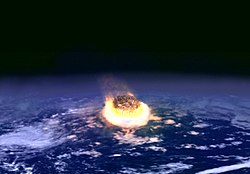 Asteroids of only a few kilometers wide can release the energy of millions of nuclear weapons when colliding with planets (artist's impression).

Non-avian dinosaur fossils are found only below the Cretaceous–Paleogene boundary and became extinct immediately before or during the event.[13] A very small number of dinosaur fossils have been found above the Cretaceous–Paleogene boundary, but they have been explained as reworked fossils, that is, fossils that have been eroded from their original locations then preserved in later sedimentary layers.[14][15][16] Mosasaurs, plesiosaurs, pterosaurs and many species of plants and invertebrates also became extinct. Mammalian and bird clades passed through the boundary with few extinctions, and evolutionary radiation from those Maastrichtian clades occurred well past the boundary. Rates of extinction and radiation varied across different clades of organisms.[17]

Many scientists hypothesize that the Cretaceous–Paleogene extinctions were caused by catastrophic events such as the massive asteroid impact that caused the Chicxulub crater, in combination with increased volcanic activity, such as that recorded in the Deccan Traps, both of which have been firmly dated to the time of the extinction event. In theory, these events reduced sunlight and hindered photosynthesis, leading to a massive disruption in Earth's ecology. A much smaller number of researchers believe the extinction was more gradual, resulting from slower changes in sea level or climate. [17]