Degenerative disc disease (DDD) is a medical condition in which there are anatomic changes and a loss of function of varying degrees of one or more intervertebral discs of the spine of sufficient magnitude as to cause symptoms.[1] The root cause is thought to be loss of soluble proteins within the fluid contained in the disc with resultant reduction of the oncotic pressure, which in turn causes loss of fluid volume. Normal downward forces cause the affected disc to lose height, and the distance between vertebrae is reduced. The anulus fibrosus, the rigid outer shell of a disc, also weakens. This loss of height causes laxity of the longitudinal ligaments, which may allow anterior, posterior, or lateral shifting of the vertebral bodies, causing facet joint malalignment and arthritis; scoliosis; cervical hyperlordosis; thoracic hyperkyphosis; lumbar hyperlordosis; narrowing of the space available for the spinal tract within the vertebra (spinal stenosis); or narrowing of the space through which a spinal nerve exits (vertebral foramen stenosis) with resultant inflammation and impingement of a spinal nerve, causing a radiculopathy.

DDD can cause mild to severe pain, either acute or chronic, near the involved disc, as well as neuropathic pain if an adjacent spinal nerve root is involved. Diagnosis is suspected when typical symptoms and physical findings are present; and confirmed by x-rays of the vertebral column. Occasionally the radiologic diagnosis of disc degeneration is made incidentally when a cervical x-ray, chest x-ray, or abdominal x-ray is taken for other reasons, and the abnormalities of the vertebral column are recognized. The diagnosis of DDD is not a radiologic diagnosis, since the interpreting radiologist is not aware whether there are symptoms present or not. Typical radiographic findings include disc space narrowing, displacement of vertebral bodies, fusion of adjacent vertebral bodies, and development of bone in adjacent soft tissue (osteophyte formation). An MRI is typically reserved for those with symptoms, signs, and x-ray findings suggesting the need for surgical intervention.

Treatment may include chiropractic to reduce pain and increase any reduced range of motion (ROM) of the spine; Physical Therapy for pain relief, ROM, and appropriate muscle/strength training with emphasis on correcting abnormal posture, assisting the paravertebral (paraspinous) muscles in stabilizing the spine, and core muscle strengthening; stretching exercises; massage therapy; oral analgesia with non-steroidal anti-inflammatory agents (NSAIDS); and topical analgesia with lidocaine, ice and heat. Immediate surgery may be indicated if the symptoms are severe or sudden in onset, or there is a sudden worsening of symptoms. Elective surgery may be indicated after six months of conservative therapy with unsatisfactory relief of symptoms.

Degenerative disc disease can result in lower back or upper neck pain. The amount of degeneration does not correlate well with the amount of pain patients experience. Many people experience no pain while others, with the same amount of damage have severe, chronic pain.[2] Whether a patient experiences pain or not largely depends on the location of the affected disc and the amount of pressure that is being put on the spinal column and surrounding nerve roots.

Nevertheless, degenerative disc disease is one of the most common sources of back pain and affects approximately 30 million people every year.[3] With symptomatic degenerative disc disease, the pain can vary depending on the location of the affected disc. A degenerated disc in the lower back can result in lower back pain, sometimes radiating to the hips, as well as pain in the buttocks, thighs or legs. If pressure is being placed on the nerves by exposed nucleus pulposus, sporadic tingling or weakness through the knees and legs can also occur.

A degenerated disc in the upper neck will often result in pain to the neck, arm, shoulders and hands; tingling in the fingers may also be evident if nerve impingement is occurring.

Pain is most commonly felt or worsened by movements such as sitting, bending, lifting and twisting.

After an injury, some discs become painful because of inflammation and the pain comes and goes. Some people have nerve endings that penetrate more deeply into the anulus fibrosus (outer layer of the disc) than others, making discs more likely to generate pain. In the alternative, the healing of trauma to the outer anulus fibrosus may result in the innervation of the scar tissue and pain impulses from the disc, as these nerves become inflamed by nucleus pulposus material. Degenerative disc disease can lead to a chronic debilitating condition and can have a serious negative impact on a person's quality of life. When pain from degenerative disc disease is severe, traditional nonoperative treatment may be ineffective.

There is a disc between each of the vertebrae in the spine. A healthy, well-hydrated disc will contain a great deal of water in its center, known as the nucleus pulposus, which provides cushioning and flexibility for the spine. Much of the mechanical stress that is caused by everyday movements is transferred to the discs within the spine and the water content within them allows them to effectively absorb the shock. At birth, a typical human nucleus pulposus will contain about 80% water.[4] However natural daily stresses and minor injuries can cause these discs to gradually lose water as the annulus fibrosus, or the rigid outer shell of a disc, weakens.[5] Because degenerative disc disease is largely due to natural daily stresses, the American Academy of Orthopaedic Manual Physical Therapists have suggested it is not truly a "disease" process.[6]

This water loss makes the discs less flexible and results in the gradual collapse and narrowing of the gap in the spinal column. As the space between vertebrae gets smaller, extra pressure can be placed on the discs causing tiny cracks or tears to appear in the annulus. If enough pressure is exerted, it is possible for the nucleus pulposus material to seep out through the tears in the annulus and can cause what is known as a herniated disc.

As the two vertebrae above and below the affected disc begin to collapse upon each other, the facet joints at the back of the spine are forced to shift which can affect their function.[7]

Additionally, the body can react to the closing gap between vertebrae by creating bone spurs around the disc space in an attempt to stop excess motion.[8] This can cause issues if the bone spurs start to grow into the spinal canal and put pressure on the spinal cord and surrounding nerve roots as it can cause pain and affect nerve function. This condition is called spinal stenosis.

For women, there is evidence that menopause and related estrogen-loss are associated with lumbar disc degeneration, usually occurring during the first 15 years of the climacteric. The potential role of sex hormones in the etiology of degenerative skeletal disorders is being discussed for both genders.[9]

Mutations in several genes have been implicated in intervertebral disc degeneration. Probable candidate genes include type I collagen (sp1 site), type IX collagen, vitamin D receptor, aggrecan, asporin, MMP3, interleukin-1, and interleukin-6 polymorphisms.[10] Mutation in genes – such as MMP2 and THBS2 – that encode for proteins and enzymes involved in the regulation of the extracellular matrix has been shown to contribute to lumbar disc herniation.[11][12] 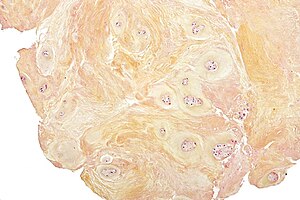 Micrograph of a fragment of a resected degenerative vertebral disc, showing degenerative fibrocartilage and clusters of chondrocytes. HPS stain.

Degenerative discs typically show degenerative fibrocartilage and clusters of chondrocytes, suggestive of repair. Inflammation may or may not be present. Histologic examination of disc fragments resected for presumed DDD is routine to exclude malignancy.

Fibrocartilage replaces the gelatinous mucoid material of the nucleus pulposus as the disc changes with age. There may be splits in the anulus fibrosus, permitting herniation of elements of nucleus pulposus. There may also be shrinkage of the nucleus pulposus that produces prolapse or folding of the anulus fibrosus with secondary osteophyte formation at the margins of the adjacent vertebral body. The pathologic findings in DDD include protrusion, spondylolysis, and subluxation of vertebrae (spondylolisthesis) and spinal stenosis. It has been hypothesized that Cutibacterium acnes may play a role.[13]

Diagnosis of degenerative disc disease will usually consist of an analysis of a patient's individual medical history, a physical exam designed to reveal muscle weakness, tenderness or poor range of motion, and an x-ray to confirm the diagnosis and rule out other causes.

Often, degenerative disc disease can be successfully treated without surgery. One or a combination of treatments such as physical therapy, anti-inflammatory medications such as nonsteroidal anti-inflammatory drugs, traction, or epidural steroid injection often provide adequate relief of troubling symptoms.

Surgery may be recommended if the conservative treatment options do not provide relief within two to three months. If leg or back pain limits normal activity, if there is weakness or numbness in the legs, if it is difficult to walk or stand, or if medication or physical therapy are ineffective, surgery may be necessary, most often spinal fusion. There are many surgical options for the treatment of degenerative disc disease, including anterior[14] and posterior approaches. The most common surgical treatments include:[15]

Traditional approaches in treating patients with DDD-resultant herniated discs oftentimes include discectomy — which, in essence, is a spine-related surgical procedure involving the removal of damaged intervertebral discs (either whole removal, or partially-based). The former of these two discectomy techniques involved in open discectomy is known as Subtotal Discectomy (SD; or, aggressive discectomy) and the latter, Limited Discectomy (LD; or, conservative discectomy). However, with either technique, the probability of post-operative reherniation exists and at a considerably high maximum of 21%, prompting patients to potentially undergo recurrent disk surgery.[16]

New treatments are emerging that are still in the beginning clinical trial phases. Glucosamine injections may offer pain relief for some without precluding the use of more aggressive treatment options.[citation needed] In the US, artificial disc replacement is viewed cautiously as a possible alternative to fusion in carefully selected patients, yet it is widely used in a broader range of cases in Europe, where multi-level disc replacement of the cervical and lumbar spine is common.[citation needed] Adult stem cell or cell transplantation therapies for disc regeneration are in their infancy of development, but initial clinical trials have shown cell transplantation to be safe and initial observations suggest some beneficial effects for associated pain and disability.[17][18] An optimal cell type, transplantation method, cell density, carrier, or patient indication remains to be determined. Investigation into mesenchymal stem cell therapy knife-less fusion of vertebrae in the United States began in 2006 [19] and a DiscGenics nucleus pulposus progenitor cell transplantation clinical trial has started as of 2018 in the USA [20] and Japan.[21]

Researchers and surgeons have conducted clinical and basic science studies to uncover the regenerative capacity possessed by the large animal species involved (humans and quadrupeds) for potential therapies to treat the disease.[22] Some therapies, carried out by research laboratories in New York, include introduction of biologically-engineered, injectable riboflavin cross-linked high density collagen (HDC-laden) gels into disease spinal segments to induce regeneration, ultimately restoring functionality and structure to the two main inner and outer components of vertebral discs — anulus fibrosus and the nucleus pulposus.[23]

Degenerative disc disease can occur in other mammals besides humans. It is a common problem in several dog breeds, and attempts to remove this disease from dog populations have led to several hybrid breeds, such as the Chiweenie.[24]