Intradermal injection, often abbreviated ID, is a shallow or superficial injection of a substance into the dermis, which is located between the epidermis and the hypodermis. This route is relatively rare compared to injections into the subcutaneous tissue or muscle. Due to the more complex use, ID injections are not the preferred route of administration for injection and therefore used for certain therapies only, such as tuberculosis tests and allergy tests. Specific benefits are a higher immune responses for vaccinations, immunology and novel cancer treatments and faster drug uptake,[1] since for certain small and well soluble proteins or molecules, ID route of administration is associated with fast uptake systemically compared to subcutaneous injections, applied in novel closed loop insuline infusion systems. Additionally, the body's reaction to substances is more easily visible since it is closer to the surface.[2]

Common injection sites include the inner surface of the forearm and the upper back, under the shoulder blade.[2]

Equipment include syringes calibrated in tenths and hundredths of a milliliter. The dosage given is usually less than 0.5 mL, less than given subcutaneously or intramuscularly. A 1⁄4-to-1⁄2-inch-long (6 to 13 mm) and 26 or 27 gauge thick needle is used.[2] 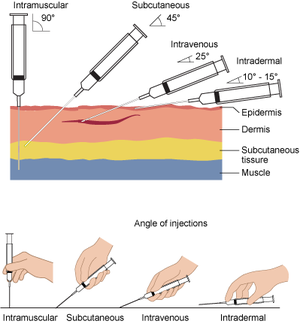 The traditional procedure of ID injection (Mantoux Procedure) involves injecting at angle of administration of 5 to 15 degrees angle, almost against the skin. With bevel (opening) side up, the needle is inserted about 1⁄8 inch (3 mm) with the entire bevel inside and injected while watching for a small wheal or blister to appear.