The use of IV route to administer fluids has been around since the 1830s, and, in 1922, Cecil K. Drinker et al. saw that bone, specifically the sternum, could also be used as a route of administration for emergency purposes.[4] To continue the expansion of knowledge regarding IO administration, a successful blood transfusion was done in 1940 using the sternum, and afterwards, in 1941, Tocantins and O'Neill demonstrated successful vascular access using the bone marrow cavity of a long bone in rabbits.[4] Because of Tocantins and O'Neill's success in their experiments with rabbits, human clinical trials were established using mainly the body of the sternum or manubrium for access.[5] Emanuel M. Papper and others then continued to advocate, research, and make advances on behalf of IO administration.[6] Once Papper showed that the bone marrow space could be used comparatively to administer IV fluids and drugs, intraosseous infusion was popularized during World War II in order to prevent soldiers death via hemorrhagic shock.[7] While popular in the field during WWII, the use of IO was not seen as a standard for emergencies until the 1980s, and only so for children.[7] With the rise of technology allowing the ease of technique of IO, and a lower risk of complications like bloodstream infections seen than when using peripheral access, the alternative of IO access has increased throughout the years for adults, as well.[7] IO is now recommended in Advanced Cardiac and Pediatric Advanced Life Support treatment protocols, in the cases where access via IV cannot be established in a timely manner.[4]

Intraosseous access is indicated in emergent situations, such as when a person experiences some type of major trauma like shock, cardiac arrest, severe dehydration,[8] or severe gastrointestinal hemorrhage.[9] IO access can provide the quickest way to rapidly infuse needed medications and fluids in an emergency situation.[8] In people who experience critical trauma and who do not have good blood pressure, the IO route success rates double that of a peripheral IV route.

In addition to the emergency clinical scenario that can call for an IO route to be used, IO access is only indicated when access to peripheral veins is either not possible or delayed. When IV access is either not possible or delayed, other indications for utilizing the IO route include administering contrast if needed for radiology scans and drawing blood for laboratory testing and analysis.[10] Situations that can result in decreased access or delay to peripheral veins and thus indicate the use of an IO route to infuse medications and fluids include circumstances like burns, fluid accumulation (edema), past IV drug use, obesity and very low blood pressure.[8]

An IO infusion can be used on adult or pediatric populations when traditional methods of vascular access are difficult or otherwise cause unwanted delayed management of the administration of medications. The IO site can be used for 24 hours and should be removed as soon as intravenous access has been gained. Prolonged use of an IO site, lasting longer than 24 hours, is associated with osteomyelitis (an infection in the bone).[3] File:Intraosseous infusion needle insertion into anterior tibia.webm The needle is injected through the bone's hard cortex and into the soft marrow interior which allows immediate access to the vascular system. The IO needle is positioned at a 90 degree angle to the injection site, and the needle is advanced through manual traction, impact driven force, or power driven. Each IO device has different designated insertion locations. The most common site of insertion is the antero-medial aspect of the upper, proximal tibia as it lies just under the skin and is easily located. This is on the upper and inner portion of the tibia. Other insertion sites include the anterior aspect of the femur, the superior iliac crest, proximal humerus, proximal tibia, distal tibia, sternum (manubrium).[1]

Although intravascular access is still the preferred method for medication delivery in the prehospital area, IO access for adults has become more common. As of 2010, American Heart Association no longer recommends using the endotracheal tube for resuscitation drugs, except as a last resort when IV or IO access cannot be gained.[1] ET absorption of medications is poor and optimal drug dosings are unknown. The IO is becoming more common in civilian and military based pre-hospital emergency medical services (EMS) systems globally.[11]

Intraosseous access has roughly the same absorption rate as IV access, and allows for fluid resuscitation. For example, sodium bicarbonate can be administered IO during a cardiac arrest when IV access is unavailable.[1] High flow rates are attainable with an IO infusion, up to 125 milliliters per minute. This high rate of flow is achieved using a pressure bag to administer the infusion directly into the bone. Large volume IO infusions are known to be painful. 1% lidocaine is used to ease the pain associated with large volume IO infusions in conscious people.[3]

Like any medical procedure, intraosseous infusion has some potential complications. In a review by Tyler et al., an analysis across the included studies found the overall complication rate associated with IO infusions to be less than 1% (0.9%).[12]

Many of these potential complications can be prevented with simple measures like using good technique and keeping the timeframe where IO infusion is used short by switching to IV when feasible.[14] Bone fracture complications can be decreased by using modern techniques and having more regular training on how to puncture the bone to access the intraosseous marrow for infusion. Extravasation can lead to the more serious complication compartment syndrome. The risk of developing compartment syndrome can be reduced by medical personnel checking the infusion site regularly for any signs of swelling. Swelling could indicate misplacement of the catheter. Avoiding puncturing the same bone in a 48-hour time frame can also lessen risk of developing this complication. The risk of osteomyelitis, while very low ( <1%), can be further lessened by using sterile, hygienic practices and modern devices to make the puncture. Damage to the epiphyseal plate can be avoided by training medical personnel about proper landmarks to be used for determining puncture sites.[13]

Intraosseous devices allow quick and safe access to the individual's vascular system for fluid and drug administration. After proper education and training, medical professionals can obtain vascular access via IO route of administration by using one of the multiple devices that have been approved by the FDA for 24-hour use.[7] There are several FDA approved IO devices, categorized by their mechanism of action: 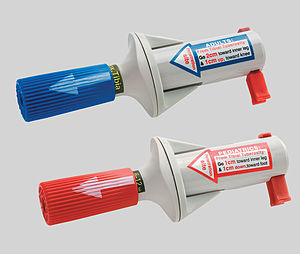 Each device is capable of achieving rapid vascular access, despite mechanism of action, with insertion times comparable to IV administration route.[16]

Intraosseous infusion (IO) is used in pediatric populations during anesthesia when other intravenous access, central venous catherization or venous cutdown, are difficult to use or cannot be used. When individuals are severely ill and are in need of "rapid, efficient, and safe delivery of drugs", IO is used.[18] When inserting the intraosseous needle on a conscious individual, this can be very painful. For children, anesthesia is not recommended before the procedure for non-emergency situations. Instead, distracting and holding the child is preferred. Intraosseous infusion is used in instances such as, "immediate indication/life-threatening emergency, cardiac/respiratory arrest, acute shock, hypothermia, obesity, edema, thermal injury, etc."[19]

Another incidence where IO is preferred is during pediatric requiring resuscitation. In a study done by Glaeser et al., concluded that individuals who received IO vs. peripheral and central intravenous access were able to obtain much faster and successful IO access. In another study by Fiorito et al., observed the safety of IO use during transporting critically ill pediatric individuals. Based on the results, they concluded that use of IO was safe due to 78% of successful placement of IO needle as well as complications that occurred in 12% of the cases.[21]

Similarly to adults, contradictions for IO infusion use in pediatrics include bone disease such as osteogenesis imperfecta, osteopetrosis, and fractures. Others include, cellulitis, burn, and infections.[22]