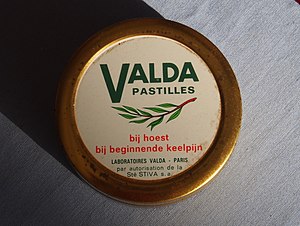 A throat lozenge (also known as a cough drop, troche, cachou, pastille or cough sweet) is a small, typically medicated tablet intended to be dissolved slowly in the mouth to temporarily stop coughs, lubricate, and soothe irritated tissues of the throat (usually due to a sore throat or strep throat), possibly from the common cold or influenza. Cough tablets have taken the name lozenge, based on their original shape, a diamond.

Other varieties such as Halls contain menthol, peppermint oil and/or spearmint as their active ingredient(s). Honey lozenges are also available.

The purpose of the throat lozenge is to calm the irritation that may be felt in the throat while swallowing, breathing, or even drinking certain fluids. 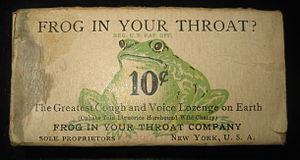 Candies to soothe the throat date back to 1000 BC in Egypt 's Twentieth Dynasty, when they were made from honey flavored with citrus, herbs, and spices.(citation?) In the 19th century, physicians discovered morphine and heroin, which suppress coughing at its source—the brain. Popular formulations of that era included Smith Brothers Cough Drops, first advertised in 1852, and Luden's, created in 1879. Concern over the risk of opioid dependence led to the development of alternative medications.[1]