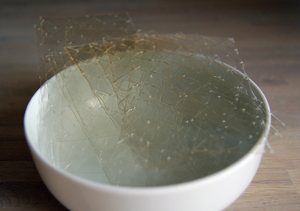 Gelatin, here in sheets for cooking, is a hydrogel.

A hydrogel is a crosslinked hydrophilic polymer that does not dissolve in water. They are highly absorbent yet maintain well defined structures. These properties underpin several applications, especially in the biomedical area. Many hydrogels are synthetic, but some are derived from nature.[1] The term 'hydrogel' was coined in 1894.[2]

An adhesive bandage with a hydrogel pad, used for blisters and burns. The central gel is clear, the adhesive waterproof plastic film is clear, the backing is white and blue.

The dominant material for contact lenses are acrylate-siloxane hydrogels. They have replaced hard contact lenses. One of their most attractive properties is oxygen permeability, which is required since the cornea lacks vasculature.

Hydrogels are prepared using a variety of polymeric materials, which can be divided broadly into two categories according to their origin: natural or synthetic polymers. Natural polymers for hydrogel preparation include hyaluronic acid, chitosan, heparin, alginate, and fibrin.[19] Common synthetic polymers include polyvinyl alcohol, polyethylene glycol, sodium polyacrylate, acrylate polymers and copolymers thereof.[1]

One notable method of initiating a polymerization reaction involves the use of light as a stimulus. In this method, photoinitiators, compounds that cleave from the absorption of photons, are added to the precursor solution which will become the hydrogel. When the precursor solution is exposed to a concentrated source of light, the photoinitiators will cleave and form free radicals, which will begin a polymerization reaction that forms crosslinks between polymer strands. This reaction will cease if the light source is removed, allowing the amount of crosslinks formed in the hydrogel to be controlled.[20] The properties of a hydrogel are highly dependent on the type and quantity of its crosslinks, making photopolymerization a popular choice for fine-tuning hydrogels. This technique has seen considerable use in cell and tissue engineering applications due to the ability to inject or mold a precursor solution loaded with cells into a wound site, then solidify it in situ.[15][20]

Hydrogels also possess a degree of flexibility very similar to natural tissue due to their significant water content. As responsive "smart materials", hydrogels can encapsulate chemical systems which upon stimulation by external factors such as a change of pH may cause specific compounds such as glucose to be liberated to the environment, in most cases by a gel–sol transition to the liquid state. Chemomechanical polymers are mostly also hydrogels, which upon stimulation change their volume and can serve as actuators or sensors.

Hydrogels been investigated for diverse applications. By modifying the polymer concentration of a hydrogel (or conversely, the water concentration), the Young's modulus, shear modulus, and storage modulus can vary from 10 Pa to 3 MPa, a range of about five orders of magnitude.[22] A similar effect can be seen by altering the crosslinking concentration.[22] This much variability of the mechanical stiffness is why hydrogels are so appealing for biomedical applications, where it is vital for implants to match the mechanical properties of the surrounding tissues.[23] Characterizing the mechanical properties of hydrogels can be difficult especially due to the differences in mechanical behavior that hydrogels have in comparison to other traditional engineering materials. In addition to its rubber elasticity and viscoelasticity, hydrogels have an additional time dependent deformation mechanism which is dependent on fluid flow called poroelasticity. These properties are extremely important to consider while performing mechanical experiments. Some common mechanical testing experiments for hydrogels are tension, compression (confined or unconfined), indentation, shear rheometry or dynamic mechanical analysis.[22]

In the unswollen state, hydrogels can be modelled as highly crosslinked chemical gels, in which the system can be described as one continuous polymer network. In this case:

where G is the shear modulus, k is the Boltzmann constant, T is temperature, Np is the number of polymer chains per unit volume, ρ is the density, R is the ideal gas constant, and [math]\displaystyle{ \overline{M}_{c} }[/math] is the (number) average molecular weight between two adjacent cross-linking points. [math]\displaystyle{ \overline{M}_{c} }[/math] can be calculated from the swell ratio, Q, which is relatively easy to test and measure.[22]

For the swollen state, a perfect gel network can be modeled as:[22]

For hydrogels, their elasticity comes from the solid polymer matrix while the viscosity originates from the polymer network mobility and the water and other components that make up the aqueous phase.[24] Viscoelastic properties of a hydrogel is highly dependent on the nature of the applied mechanical motion. Thus, the time dependence of these applied forces is extremely important for evaluating the viscoelasticity of the material.[25]

Physical models for viscoelasticity attempt to capture the elastic and viscous material properties of a material. In an elastic material, the stress is proportional to the strain while in a viscous material, the stress is proportional to the strain rate. The Maxwell model is one developed mathematical model for linear viscoelastic response. In this model, viscoelasticity is modeled analogous to an electrical circuit with a Hookean spring, that represents the Young's modulus, and a Newtonian dashpot that represents the viscosity. A material that exhibit properties described in this model is a Maxwell material. Another physical model used is called the Kelvin-Voigt Model and a material that follow this model is called a Kelvin–Voigt material.[26] In order to describe the time-dependent creep and stress-relaxation behavior of hydrogel, a variety of physical lumped parameter models can be used.[22] These modeling methods vary greatly and are extremely complex, so the empirical Prony Series description is commonly used to describe the viscoelastic behavior in hydrogels.[22]

In order to measure the time-dependent viscoelastic behavior of polymers dynamic mechanical analysis is often performed. Typically, in these measurements the one side of the hydrogel is subjected to a sinusoidal load in shear mode while the applied stress is measured with a stress transducer and the change in sample length is measured with a strain transducer.[25] One notation used to model the sinusoidal response to the periodic stress or strain is:

in which G' is the real (elastic or storage) modulus, G" is the imaginary (viscous or loss) modulus.

Poroelasticity is described by several coupled equations, thus there are few mechanical tests that relate directly to the poroelastic behavior of the material, thus more complicated tests such as indentation testing, numerical or computational models are utilized. Numerical or computational methods attempt to simulate the three dimensional permeability of the hydrogel network.

Applications can dictate for diverse thermal responses. For example, in the biomedical field, LCST hydrogels are being investigated as drug delivery systems due to being injectable (liquid) at room temp and then solidifying into a rigid gel upon exposure to the higher temperatures of the human body.[29] There are many other stimuli that hydrogels can be responsive to, including: pH, glucose, electrical signals, light, pressure, ions, antigens, and more.[29]

The mechanical properties of hydrogels can be fine-tuned in many ways beginning with attention to their hydrophobic properties.[29][30] Another method of modifying the strength or elasticity of hydrogels is to graft or surface coat them onto a stronger/stiffer support, or by making superporous hydrogel (SPH) composites, in which a cross-linkable matrix swelling additive is added.[31] Other additives, such as nanoparticles and microparticles, have been shown to significantly modify the stiffness and gelation temperature of certain hydrogels used in biomedical applications.[32][33][34]

While a hydrogel's mechanical properties can be tuned and modified through crosslink concentration and additives, these properties can also be enhanced or optimized for various applications through specific processing techniques. These techniques include electro-spinning, 3D/4D printing, self-assembly, and freeze-casting. One unique processing technique is through the formation of multi-layered hydrogels to create a spatially-varying matrix composition and by extension, mechanical properties. This can be done by polymerizing the hydrogel matrixes in a layer by layer fashion via UV polymerization. This technique can be useful in creating hydrogels that mimic articular cartilage, enabling a material with three separate zones of distinct mechanical properties.[35]

Another emerging technique to optimize hydrogel mechanical properties is by taking advantage of the Hofmeister series. Due to this phenomena, through the addition of salt solution, the polymer chains of a hydrogel aggregate and crystallize, which increases the toughness of the hydrogel. This method, called "salting out", has been applied to poly(vinyl alcohol) hydrogels by adding a sodium sulfate salt solution.[36] Some of these processing techniques can be used synergistically with each other to yield optimal mechanical properties. Directional freezing or freeze-casting is another method in which a directional temperature gradient is applied to the hydrogel is another way to form materials with anisotropic mechanical properties. Utilizing both the freeze-casting and salting-out processing techniques on poly(vinyl alcohol) hydrogels to induce hierarchical morphologies and anisotropic mechanical properties.[37] Directional freezing of the hydrogels helps to align and coalesce the polymer chains, creating anisotropic array honeycomb tube-like structures while salting out the hydrogel yielded out a nano-fibril network on the surface of these honeycomb tube-like structures. While maintaining a water content of over 70%, these hydrogels' toughness values are well above those of water-free polymers such as polydimethylsiloxane (PDMS), Kevlar, and synthetic rubber. The values also surpass the toughness of natural tendon and spider silk.[38]

Natural hydrogel materials are being investigated for tissue engineering; these materials include agarose, methylcellulose, hyaluronan, elastin-like polypeptides, and other naturally derived polymers. Hydrogels show promise for use in agriculture, as they can release agrochemicals including pesticides and phosphate fertiliser slowly, increasing efficiency and reducing runoff, and at the same time improve the water retention of drier soils such as sandy loams.

Hydrogels have been investigated for drug delivery. Polymeric drug delivery systems have overcome challenge due to their biodegradability, biocompatibility, and anti-toxicity.[39][40] Materials such as collagen, chitosan, cellulose, and poly (lactic-co-glycolic acid) have been implemented extensively for drug delivery to diverse organs in the human body such as: the eye,[41] nose, kidneys,[42] lungs,[43] intestines,[44] skin,[45] and brain. Future work is focused on better anti-toxicity of hydrogels, varying assembly techniques for hydrogels making them more biocompatible[46] and the delivery of complex systems such as using hydrogels to deliver therapeutic cells.[47]