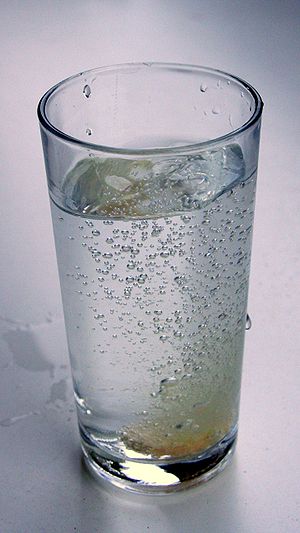 An effervescent tablet in a glass of water

Effervescent or carbon tablets are tablets which are designed to dissolve in water, and release carbon dioxide.[1][2][3] They are products of compression of component ingredients in the form of powders into a dense mass, which is packaged in blister pack, or with a hermetically sealed package with incorporated desiccant in the cap. To use them, they are dropped into water to make a solution. The powdered ingredients are also packaged and sold as effervescent powders or may be granulated and sold as effervescent granules. Generally powdered ingredients are first granularized before being made into tablets.[4][5]

Effervescent medicinal beverages date back to the late 1800s and originally arose to mask the taste of bitter waters taken as curatives, during the water cure craze of that era.[6]

In the 17th and 18th centuries, scientists began uncovering the chemical make-up and physiological benefits of various salts such as Glauber's salt and Epsom salts.[6] These salts were found in mineral springs, which, since the Roman Empire,[7][8][9][9] had been used as health spas, where people would go to bathe in, and drink, mineral-rich waters for their health. These developments led to attempts to replicate the salt mixtures found in these naturally occurring mineral waters using off-the-shelf ingredients.[6] Mixing these kinds of salts — especially carbonates and tartrates — with flavorings like lemon into an effervescent compound with citric or tartaric acid proved especially popular and set off a craze for the new "fruit salts". Effervescent tablets have been used as products of the pharmaceutical and dietary industries for over two centuries.[6]

Vitamin tablets may be sold as effervescent tablets. Alka-selzer is an antacid and pain reliever sold as an effervescent powder.

There are several categories of active ingredients that may be best administered in the form of effervescent preparations:

Cleaning tablets may be added to laundry or filled tubs of water. Some tablets used for dyeing eggs for Easter are effervescent.