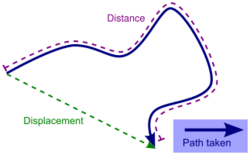 Displacement versus distance traveled along a path

In considering motions of objects over time the instantaneous velocity of the object is the rate of change of the displacement as a function of time. The instantaneous speed then is distinct from velocity, or the time rate of change of the distance traveled along a specific path. The velocity may be equivalently defined as the time rate of change of the position vector. If one considers a moving initial position, or equivalently a moving origin (e.g. an initial position or origin which is fixed to a train wagon, which in turn moves with respect to its rail track), the velocity of P (e.g. a point representing the position of a passenger walking on the train) may be referred to as a relative velocity, as opposed to an absolute velocity, which is computed with respect to a point which is considered to be 'fixed in space' (such as, for instance, a point fixed on the floor of the train station).

For a position vector s that is a function of time t, the derivatives can be computed with respect to t. These derivatives have common utility in the study of kinematics, control theory, vibration sensing and other sciences and engineering disciplines.