Short description: Thermodynamic process of a closed system in which volume remains constant

An isochoric thermodynamic quasi-static process is characterized by constant volume, i.e., ΔV = 0. The process does no pressure-volume work, since such work is defined by [math]\displaystyle{ W = P \Delta V , }[/math] where P is pressure. The sign convention is such that positive work is performed by the system on the environment.

If the process is not quasi-static, the work can perhaps be done in a volume constant thermodynamic process.[1]

For a reversible process, the first law of thermodynamics gives the change in the system's internal energy: [math]\displaystyle{ dU = dQ - dW }[/math]

Using the definition of specific heat capacity at constant volume, cv = (dQ/dT)/m, where m is the mass of the gas, we get [math]\displaystyle{ dQ = m c_\mathrm{v} \, dT }[/math] 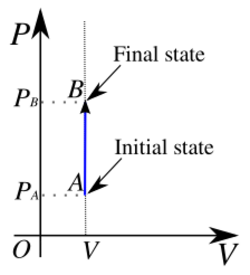 Isochoric process in the pressure volume diagram. In this diagram, pressure increases, but volume remains constant.

If an ideal gas is used in an isochoric process, and the quantity of gas stays constant, then the increase in energy is proportional to an increase in temperature and pressure. For example a gas heated in a rigid container: the pressure and temperature of the gas will increase, but the volume will remain the same.

The ideal Otto cycle is an example of an isochoric process when it is assumed that the burning of the gasoline-air mixture in an internal combustion engine car is instantaneous. There is an increase in the temperature and the pressure of the gas inside the cylinder while the volume remains the same.

The noun "isochor" and the adjective "isochoric" are derived from the Greek words ἴσος (isos) meaning "equal", and χώρα (khṓra) meaning "space."