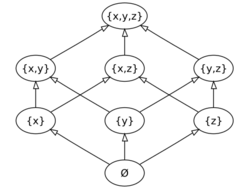 The elements of the power set of the set {x, y, z} ordered with respect to inclusion.

In mathematics, the power set (or powerset) of any set S is the set of all subsets of S, including the empty set and S itself, variously denoted as P(S), 𝒫(S), ℘(S) (using the "Weierstrass p"), P(S), ℙ(S), or, identifying the powerset of S with the set of all functions from S to a given set of two elements, 2S. In axiomatic set theory (as developed, for example, in the ZFC axioms), the existence of the power set of any set is postulated by the axiom of power set.[1]

Any subset of P(S) is called a family of sets over S.

If S is a finite set with |S| = n elements, then the number of subsets of S is |P(S)| = 2n. This fact, which is the motivation for the notation 2S, may be demonstrated simply as follows,

In set theory, XY is the set of all functions from Y to X. As "2" can be defined as {0,1} (see natural number), 2S (i.e., {0,1}S) is the set of all functions from S to {0,1}. By identifying a function in 2S with the corresponding preimage of 1, we see that there is a bijection between 2S and P(S), where each function is the characteristic function of the subset in P(S) with which it is identified. Hence 2S and P(S) could be considered identical set-theoretically. (Thus there are two distinct notational motivations for denoting the power set by 2S: the fact that this function-representation of subsets makes it a special case of the XY notation and the property, mentioned above, that |2S| = 2|S|.)

For the whole power set of S we get:

Such bijective mapping of S to integers is arbitrary, so this representation of subsets of S is not unique, but the sort order of the enumerated set does not change its cardinality.

However, such finite binary representation is only possible if S can be enumerated (this is possible even if S has an infinite cardinality, such as the set of integers or rationals, but not for example if S is the set of real numbers, in which we cannot enumerate all irrational numbers to assign them a defined finite location in an ordered set containing all irrational numbers).

For example, the power set of a set with three elements, has:

Using this relationship we can compute [math]\displaystyle{ \left|2^S \right| }[/math] using the formula:

A set can be regarded as an algebra having no nontrivial operations or defining equations. From this perspective the idea of the power set of X as the set of subsets of X generalizes naturally to the subalgebras of an algebraic structure or algebra.

Now the power set of a set, when ordered by inclusion, is always a complete atomic Boolean algebra, and every complete atomic Boolean algebra arises as the lattice of all subsets of some set. The generalization to arbitrary algebras is that the set of subalgebras of an algebra, again ordered by inclusion, is always an algebraic lattice, and every algebraic lattice arises as the lattice of subalgebras of some algebra. So in that regard subalgebras behave analogously to subsets.

However, there are two important properties of subsets that do not carry over to subalgebras in general. First, although the subsets of a set form a set (as well as a lattice), in some classes it may not be possible to organize the subalgebras of an algebra as itself an algebra in that class, although they can always be organized as a lattice. Secondly, whereas the subsets of a set are in bijection with the functions from that set to the set {0,1} = 2, there is no guarantee that a class of algebras contains an algebra that can play the role of 2 in this way.

Certain classes of algebras enjoy both of these properties. The first property is more common, the case of having both is relatively rare. One class that does have both is that of multigraphs. Given two multigraphs G and H, a homomorphism h: G → H consists of two functions, one mapping vertices to vertices and the other mapping edges to edges. The set HG of homomorphisms from G to H can then be organized as the graph whose vertices and edges are respectively the vertex and edge functions appearing in that set. Furthermore, the subgraphs of a multigraph G are in bijection with the graph homomorphisms from G to the multigraph Ω definable as the complete directed graph on two vertices (hence four edges, namely two self-loops and two more edges forming a cycle) augmented with a fifth edge, namely a second self-loop at one of the vertices. We can therefore organize the subgraphs of G as the multigraph ΩG, called the power object of G.

What is special about a multigraph as an algebra is that its operations are unary. A multigraph has two sorts of elements forming a set V of vertices and E of edges, and has two unary operations s,t: E → V giving the source (start) and target (end) vertices of each edge. An algebra all of whose operations are unary is called a presheaf. Every class of presheaves contains a presheaf Ω that plays the role for subalgebras that 2 plays for subsets. Such a class is a special case of the more general notion of elementary topos as a category that is closed (and moreover cartesian closed) and has an object Ω, called a subobject classifier. Although the term "power object" is sometimes used synonymously with exponential object YX, in topos theory Y is required to be Ω.

In category theory and the theory of elementary topoi, the universal quantifier can be understood as the right adjoint of a functor between power sets, the inverse image functor of a function between sets; likewise, the existential quantifier is the left adjoint.[3]