Short description: Unit of mass equal to that of Earth

Precise measurement of the Earth mass is difficult, as it is equivalent to measuring the gravitational constant, which is the fundamental physical constant known with least accuracy, due to the relative weakness of the gravitational force. The mass of the Earth was first measured with any accuracy (within about 20% of the correct value) in the Schiehallion experiment in the 1770s, and within 1% of the modern value in the Cavendish experiment of 1798.

Unit of mass in astronomy

The mass of Earth is estimated to be:

which can be expressed in terms of solar mass as:

The ratio of Earth mass to lunar mass has been measured to great accuracy. The current best estimate is:[4][5]

The GM⊕ product for the Earth is called the geocentric gravitational constant and equals (398600441.8±0.8)×106 m3 s−2. It is determined using laser ranging data from Earth-orbiting satellites, such as LAGEOS-1.[9][10] The GM⊕ product can also be calculated by observing the motion of the Moon[11] or the period of a pendulum at various elevations. These methods are less precise than observations of artificial satellites.

Further information: Earth:Structure of the Earth and Earth:Abundance of elements in Earth's crust 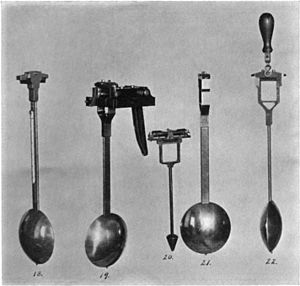 Pendulums used in Mendenhall gravimeter apparatus, from 1897 scientific journal. The portable gravimeter developed in 1890 by Thomas C. Mendenhall provided the most accurate relative measurements of the local gravitational field of the Earth.

The mass of Earth is measured indirectly by determining other quantities such as Earth's density, gravity, or gravitational constant. The first measurement in the 1770s Schiehallion experiment resulted in a value about 20% too low. The Cavendish experiment of 1798 found the correct value within 1%. Uncertainty was reduced to about 0.2% by the 1890s,[15] to 0.1% by 1930.[16]

Before the direct measurement of the gravitational constant, estimates of the Earth mass were limited to estimating Earth's mean density from observation of the crust and estimates on Earth's volume. Estimates on the volume of the Earth in the 17th century were based on a circumference estimate of 60 miles (97 km) to the degree of latitude, corresponding to a radius of 5,500 km (86% of the Earth's actual radius of about 6,371 km), resulting in an estimated volume of about one third smaller than the correct value.[18]

The average density of the Earth was not accurately known. Earth was assumed to consist either mostly of water (Neptunism) or mostly of igneous rock (Plutonism), both suggesting average densities far too low, consistent with a total mass of the order of 1024 kg. Isaac Newton estimated, without access to reliable measurement, that the density of Earth would be five or six times as great as the density of water,[19] which is surprisingly accurate (the modern value is 5.515). Newton under-estimated the Earth's volume by about 30%, so that his estimate would be roughly equivalent to (4.2±0.5)×1024 kg.

An expedition from 1737 to 1740 by Pierre Bouguer and Charles Marie de La Condamine attempted to determine the density of Earth by measuring the period of a pendulum (and therefore the strength of gravity) as a function of elevation. The experiments were carried out in Ecuador and Peru, on Pichincha Volcano and mount Chimborazo.[20] Bouguer wrote in a 1749 paper that they had been able to detect a deflection of 8 seconds of arc, the accuracy was not enough for a definite estimate on the mean density of the Earth, but Bouguer stated that it was at least sufficient to prove that the Earth was not hollow.[15]

That a further attempt should be made on the experiment was proposed to the Royal Society in 1772 by Nevil Maskelyne, Astronomer Royal.[21] He suggested that the experiment would "do honour to the nation where it was made" and proposed Whernside in Yorkshire, or the Blencathra-Skiddaw massif in Cumberland as suitable targets. The Royal Society formed the Committee of Attraction to consider the matter, appointing Maskelyne, Joseph Banks and Benjamin Franklin amongst its members.[22] The Committee despatched the astronomer and surveyor Charles Mason to find a suitable mountain.

After a lengthy search over the summer of 1773, Mason reported that the best candidate was Schiehallion, a peak in the central Scottish Highlands.[22] The mountain stood in isolation from any nearby hills, which would reduce their gravitational influence, and its symmetrical east–west ridge would simplify the calculations. Its steep northern and southern slopes would allow the experiment to be sited close to its centre of mass, maximising the deflection effect. Nevil Maskelyne, Charles Hutton and Reuben Burrow performed the experiment, completed by 1776. Hutton (1778) reported that the mean density of the Earth was estimated at [math]\displaystyle{ \tfrac{9}{5} }[/math] that of Schiehallion mountain.[23] This corresponds to a mean density about 4​1⁄2 higher than that of water (i.e., about 4.5 g/cm3), about 20% below the modern value, but still significantly larger than the mean density of normal rock, suggesting for the first time that the interior of the Earth might be substantially composed of metal. Hutton estimated this metallic portion to occupy some ​20⁄31 (or 65%) of the diameter of the Earth (modern value 55%).[24] With a value for the mean density of the Earth, Hutton was able to set some values to Jérôme Lalande's planetary tables, which had previously only been able to express the densities of the major Solar System objects in relative terms.[23]

Henry Cavendish (1798) was the first to attempt to measure the gravitational attraction between two bodies directly in the laboratory. Earth's mass could be then found by combining two equations; Newton's second law, and Newton's law of universal gravitation.

In modern notation, the mass of the Earth is derived from the gravitational constant and the mean Earth radius by

Where gravity of Earth, "little g", is

Cavendish found a mean density of 5.45 g/cm3, about 1% below the modern value. 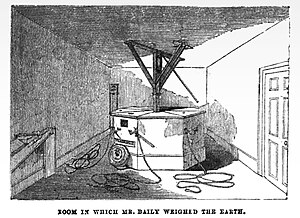 Experimental setup by Francis Baily and Henry Foster to determine the density of Earth using the Cavendish method.

In 1821, Francesco Carlini determined a density value of ρ = 4.39 g/cm3 through measurements made with pendulums in the Milan area. This value was refined in 1827 by Edward Sabine to 4.77 g/cm3, and then in 1841 by Carlo Ignazio Giulio to 4.95 g/cm3. On the other hand, George Biddell Airy sought to determine ρ by measuring the difference in the period of a pendulum between the surface and the bottom of a mine.[28] The first tests took place in Cornwall between 1826 and 1828. The experiment was a failure due to a fire and a flood. Finally, in 1854, Airy got the value 6.6 g/cm3 by measurements in a coal mine in Harton, Sunderland. Airy's method assumed that the Earth had a spherical stratification. Later, in 1883, the experiments conducted by Robert von Sterneck (1839 to 1910) at different depths in mines of Saxony and Bohemia provided the average density values ρ between 5.0 and 6.3 g/cm3. This led to the concept of isostasy, which limits the ability to accurately measure ρ, by either the deviation from vertical of a plumb line or using pendulums. Despite the little chance of an accurate estimate of the average density of the Earth in this way, Thomas Corwin Mendenhall in 1880 realized a gravimetry experiment in Tokyo and at the top of Mount Fuji. The result was ρ = 5.77 g/cm3.

The uncertainty in the modern value for the Earth's mass has been entirely due to the uncertainty in the gravitational constant G since at least the 1960s.[29] G is notoriously difficult to measure, and some high-precision measurements during the 1980s to 2010s have yielded mutually exclusive results.[30] Sagitov (1969) based on the measurement of G by Heyl and Chrzanowski (1942) cited a value of M⊕ = 5.973(3)×1024 kg (relative uncertainty 5×10−4).

Earth's mass is variable, subject to both gain and loss due to the accretion of in-falling material, including micrometeorites and cosmic dust and the loss of hydrogen and helium gas, respectively. The combined effect is a net loss of material, estimated at 5.5×107 kg (5.4×104 long tons) per year. This amount is 10−17 of the total earth mass. The 5.5×107 kg annual net loss is essentially due to 100,000 tons lost due to atmospheric escape, and an average of 45,000 tons gained from in-falling dust and meteorites. This is well within the mass uncertainty of 0.01% (6×1020 kg), so the estimated value of Earth's mass is unaffected by this factor.

Mass loss is due to atmospheric escape of gases. About 95,000 tons of hydrogen per year[31] (3 kg/s) and 1,600 tons of helium per year[32] are lost through atmospheric escape. The main factor in mass gain is in-falling material, cosmic dust, meteors, etc. are the most significant contributors to Earth's increase in mass. The sum of material is estimated to be 37000 to 78000 tons annually,[33][34] although this can vary significantly; to take an extreme example, the Chicxulub impactor, with a midpoint mass estimate of 2.3×1017 kg,[35] added 900 million times that annual dustfall amount to the Earth's mass in a single event.

Additional changes in mass are due to the mass–energy equivalence principle, although these changes are relatively negligible. Mass loss due to the combination of nuclear fission and natural radioactive decay is estimated to amount to 16 tons per year.

An additional loss due to spacecraft on escape trajectories has been estimated at 65 tons per year since the mid-20th century. Earth lost about 3473 tons in the initial 53 years of the space age, but the trend is currently decreasing.