Double Asteroid Redirection Test (DART) is a planned space probe that will visit the double asteroid Didymos and demonstrate the kinetic effects of crashing an impactor spacecraft into an asteroid moon for planetary defense purposes. The mission is intended to test whether a spacecraft impact could successfully deflect an asteroid on a collision course with Earth.

A demonstration of an asteroid deflection is a key test that NASA and other agencies wish to perform before the actual need of planetary defense is present. DART is a joint project between NASA and the Johns Hopkins Applied Physics Laboratory (APL), and it is being developed under the auspices of NASA's Planetary Defense Coordination Office.

In August 2018, NASA approved the project to start the final design and assembly phase.

Originally, the European Space Agency (ESA) and NASA had independent plans for missions to test asteroid deflection strategies, and by 2015 they struck a collaboration called AIDA involving two separate spacecraft launches that work in synergy.[5][6][7] Under the proposal, the European spacecraft, AIM, would have launched in December 2020, and DART in July 2021. AIM would have orbited the larger asteroid to study its composition and that of its moon. DART would then impact the asteroid's moon in October 2022, during a close approach to Earth.[6] AIM would have studied the asteroid's strength, surface physical properties, and its internal structure, as well as measure the effect on the asteroid moon's orbit around the larger asteroid.

The AIM orbiter was cancelled, the full characterization of the asteroids will not be obtained, and the effects of the impact by DART will be monitored from ground-based telescopes and radar.[8][7]

In June 2017, NASA approved a move from concept development to the preliminary design phase,[9] and in August 2018 NASA approved the project to start the final design and assembly phase.[10]

On 11 April 2019, NASA announced that a SpaceX Falcon 9 would be used to launch DART.[11] It was originally planned for DART to be a secondary payload on a commercial launch to keep costs low, however a mission update presentation in November 2018 noted that the mission has a dedicated launch vehicle.

Scientists estimate 25,000 large asteroids are in the Solar System, though to date, surveys have detected about 8000, therefore NASA officials think it is imperative to develop an effective plan should a near-Earth object threaten Earth.[12] 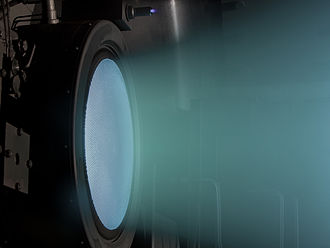 The NASA's Evolutionary Xenon Thruster (NEXT) operating in a vacuum chamber.

DART is an impactor that hosts no scientific payload other than a Sun sensor, a star tracker, and a 20 cm aperture camera (Didymos Reconnaissance and Asteroid Camera for Optical navigation - DRACO) to support autonomous navigation to impact the small asteroid's moon at its center. It is estimated that the impact of the 500 kg (1,100 lb)[13] DART at 6.6 km/s (4.1 mi/s) [14][4] will produce a velocity change on the order of 0.4 mm/s, which leads to a small change in trajectory of the asteroid system, but over time, it leads to a large shift of path.[15][6][16] Overall, DART is expected to alter the speed of Dimorphos (Didymos B) orbit by about half a millimeter per second, resulting in an orbital period change of perhaps 10 minutes.[17] Over a span of millions of kilometers, the cumulative trajectory change would turn a collision with a genuinely Earth-bound asteroid or comet into a safe outcome.[18] The actual velocity change and orbital shift will be measured a few years later by a small spacecraft called Hera that would do a detailed reconnaissance and assessment.[19] Hera was approved in November 2019.[20]

DART spacecraft will use the NEXT ion thruster, a type of solar electric propulsion.[8][21] It will be powered by 22 m2 solar arrays to generate the ~3.5 kW needed to power the NASA Evolutionary Xenon Thruster–Commercial (NEXT-C) engine.[1] The spacecraft's solar arrays use a Roll Out Solar Array (ROSA) design, and this was tested on the International Space Station in June 2017 as part of Expedition 52, delivered to the station by the CRS-11 commercial cargo mission.[22]

The DART impactor is proposed to make flyby observations of other near-Earth asteroids such as 2001 CB21 and 3361 Orpheus during its trajectory to 65803 Didymos.[23][24][25] It will obtain some images in the visible spectrum.

The Italian Space Agency (ASI) will contribute a secondary spacecraft called LICIACube (Light Italian CubeSat for Imaging of Asteroids), a small 6-unit CubeSat that will piggyback with DART and will separate shortly before impact to acquire images of the impact and ejecta as it drifts past the asteroid.[19][26][27][28] LICIACube will communicate directly with Earth, sending back images of the ejecta after the Dimorphos (Didymos B) flyby.[29]

In a collaborating project, the European Space Agency is developing Hera, a spacecraft that will be launched to Didymos in 2024 [30] — after DART's impact — to do a detailed reconnaissance and assessment.[30] Hera would carry two CubeSats, APEX and Juventas.[30]

The mission's target is 65803 Didymos, a binary asteroid system in which one asteroid is orbited by a smaller one. The primary asteroid (Didymos A) is about 780 m (2,560 ft) in diameter; its small satellite Dimorphos (Didymos B) is about 160 m (520 ft) in diameter in an orbit about 1 km from the primary.[8] DART will target the smaller asteroid, Dimorphos. Didymos is not an Earth-crossing asteroid, and there is no possibility that the deflection experiment could create an impact hazard.[16]