Proteus (/ˈproʊtiːəs/), also known as Neptune VIII, is the second-largest Neptunian moon, and Neptune's largest inner satellite. Discovered by Voyager 2 spacecraft in 1989, it is named after Proteus, the shape-changing sea god of Greek mythology.[10] Proteus orbits Neptune in a nearly equatorial orbit at a distance of about 4.75 times the radius of Neptune's equator.[3]

Despite being a predominantly icy body more than 400 km (250 mi) in diameter, Proteus's shape deviates significantly from an ellipsoid.[6] It is shaped more like an irregular polyhedron with several slightly concave facets and relief as high as 20 km (12 mi). Its surface is dark, neutral in color, and heavily cratered.[11] Proteus's largest crater is Pharos, which is more than 230 km (140 mi) in diameter. There are also a number of scarps, grooves, and valleys related to large craters.

Proteus is probably not an original body that formed with Neptune. It could have accreted later from the debris formed when the largest Neptunian satellite Triton was captured.[12]

Proteus was discovered from the images taken by the Voyager 2 space probe two months before its Neptune flyby in August 1989. Proteus was the third moon of Neptune to be discovered, 33 years after the discovery of Neptune's moon Nereid in 1949.[13]

Upon discovery, Proteus received the temporary provisional designation S/1989 N 1.[14] Stephen P. Synnott and Bradford A. Smith announced its discovery on July 7, 1989, speaking only of "17 frames taken over 21 days", which gives a discovery date of sometime before June 16.[15]

Proteus orbits Neptune at a distance of approximately 117,647 km (73,102 mi), nearly equal to 4.75 times the equatorial radius of the planet. The orbit of Proteus is nearly circular, having a small orbital eccentricity, and is inclined by about 0.5 degrees to Neptune's equator.[3] Proteus is tidally locked to Neptune, and rotates synchronously with its orbital motion, which means that Proteus always presents the same face to Neptune.[4]

Proteus is the second-largest moon of Neptune and is the largest of its regular prograde moons. It is about 420 km (260 mi) in diameter, larger than Nereid, Neptune's third-largest moon. It was not discovered by Earth-based telescopes because Proteus orbits so close to Neptune that it is lost in the glare of reflected sunlight.[14]

The surface of Proteus is dark as it has a geometrical albedo of about 10 percent–meaning that its surface reflects 10 percent of the light it receives from the Sun. The color of its surface is neutral as the reflectivity does not change appreciably with the wavelength from violet to green.[14] In the near-infrared range of around the wavelength of 2 μm, Proteus's surface becomes less reflective, indicating the possible presence of complex organic compounds such as hydrocarbons or cyanides. These compounds may be responsible for the low albedo of the inner Neptunian moons. Although Proteus is usually thought to contain significant amounts of water ice, it has not been detected spectroscopically on the surface.[11] 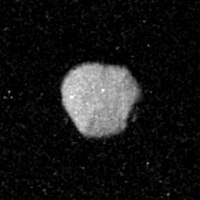 Voyager 2 image of Proteus with its large crater Pharos located at the right.

The shape of Proteus is close to a sphere with a radius of about 210 km (130 mi), although deviations from the spherical shape are large—up to 20 km (12 mi); scientists believe it is about as large as a body of its density can be without being pulled into a perfect spherical shape by its own gravity.[6] Saturn's moon Mimas has an ellipsoidal shape despite being slightly less massive than Proteus, perhaps due to the higher temperature near Saturn or tidal heating.[6] Proteus is slightly elongated in the direction of Neptune, although its overall shape is closer to an irregular polyhedron than to a triaxial ellipsoid. The surface of Proteus shows several flat or slightly concave facets measuring from 150 to 200 km in diameter. They are probably degraded impact craters.[4] 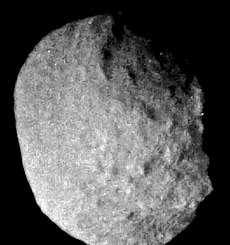 Map of Proteus from two sides.

Proteus is heavily cratered, showing no sign of any geological modification.[14] The largest crater, Pharos, has a diameter from 230 to 260 km.[6] Its depth is about 10–15 km.[4] The crater has a central dome on its floor a few kilometres high.[4] Pharos is the only named surface feature on this moon: the name is Greek and refers to the island where Proteus reigned.[18] In addition to Pharos there are several craters 50–100 km in diameter and many more with diameters less than 50 km.[4]

Other landforms on Proteus include linear features such as scarps, valleys, and grooves. The most prominent one runs parallel to the equator to the west of Pharos. These features likely formed as a result of the giant impacts, which formed Pharos and other large craters or as a result of tidal stresses from Neptune.[4][6]

Protean craters are named after water-related spirits, gods, goddesses (excluding Greek and Roman names). As of June 2021, there is only one named crater on this body.[18]

Proteus, like the other inner moons of Neptune, is unlikely to be an original body that formed with it, and is more likely to have accreted from the rubble that was produced after Triton's capture. Triton's orbit upon capture would have been highly eccentric, and would have caused chaotic perturbations in the orbits of the original inner Neptunian moons, causing them to collide and reduce to a disc of rubble.[12] Only after Triton's orbit became circularised did some of the rubble disc re-accrete into the present-day moons of Neptune.[19]

Proteus initially had a smaller orbit around Neptune, and may have formed closer to the planet. At the time of the formation of Proteus, its orbit was estimated to be 8,000 km (5,000 mi) less than its current distance from Neptune.[20] Over time, Proteus migrated outward from Neptune through tidal interactions. During the outward migration of Proteus, collisions and impact events may have formed large craters and had ejected fragments of Proteus into orbit around Neptune. A collision of Proteus and another object could possibly explain the origin of Neptune's smaller moon Hippocamp, which orbits close to Proteus.[20]