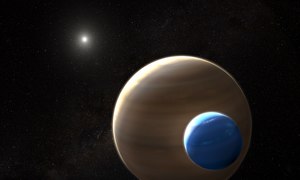 Artist's concept of rings around Rhea, a moon of Saturn

The possible detection[7] of a ring system around Saturn's natural satellite Rhea led to calculations that indicated that satellites orbiting Rhea would have stable orbits. Furthermore, the suspected rings are thought to be narrow,[8] a phenomenon normally associated with shepherd moons. However, targeted images taken by the Cassini spacecraft failed to detect any subsatellites or rings associated with Rhea of a size smaller than a few millimeters.[9]

It has also been proposed that Saturn's satellite Iapetus possessed a subsatellite in the past; this is one of several hypotheses that have been put forward to account for its unusual equatorial ridge.[10]

Many spacecraft have orbited the Moon, including crewed craft of the Apollo program. As of 2020[update], none have orbited any other moons. In 1988, the Soviet Union unsuccessfully attempted to put two robotic probes on quasi-orbits around the Martian moon Phobos.[11]

The interplanetary spacecraft JUICE currently in development will enter an orbit around Ganymede in 2032, becoming the first spacecraft to orbit a moon other than Earth's.

CAPSTONE is a planned mid-2021 launch of a 12-unit collection of CubeSat's intended to test the viability of the planned NRHO of Lunar Gateway.

With a projected November 2021 launch, the Lunar Flashlight is planned low-cost CubeSat lunar orbiter mission to explore, locate, and estimate size and composition of water ice deposits on Luna for future exploitation by robots or humans from a polar orbit.

In Planet 51 the titular planet is orbited by a moon with a Saturn-like ring system.