Short description: One of the fusion reactions by which stars convert hydrogen to helium 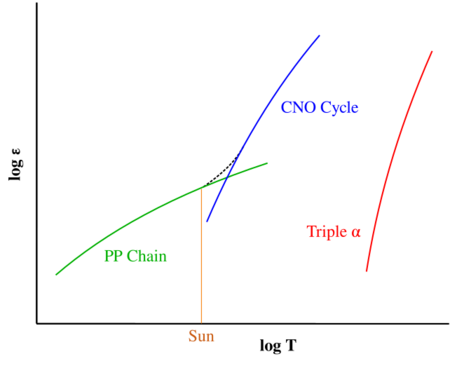 Logarithm of the relative energy output (ε) of proton–proton (PP), CNO and Triple-α fusion processes at different temperatures. The dashed line shows the combined energy generation of the PP and CNO processes within a star. At the Sun's core temperature, the PP process is more efficient. 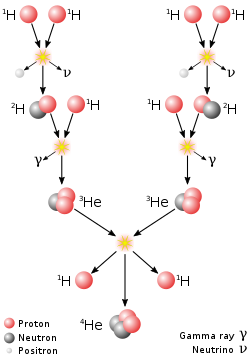 Scheme of the proton–proton branch I chain reaction

In general, proton–proton fusion can occur only if the kinetic energy (i.e. temperature) of the protons is high enough to overcome their mutual electrostatic repulsion.[3]

In the Sun, deuterium-producing events are rare. Diprotons are the much more common result of proton–proton reactions within the star, and diprotons almost immediately decay back into two protons. Since the conversion of hydrogen to helium is slow, the complete conversion of the hydrogen in the core of the Sun is calculated to take more than ten billion years.[4]

Although called the "proton–proton chain reaction", it is not a chain reaction in the normal sense. In most nuclear reactions, a chain reaction designates a reaction that produces a product, such as neutrons given off during fission, that quickly induces another such reaction.

The proton-proton chain is, like a decay chain, a series of reactions. The product of one reaction is the starting material of the next reaction. There are two such chains leading from Hydrogen to Helium in the Sun. One chain has five reactions, the other chain has six.

The theory that proton–proton reactions are the basic principle by which the Sun and other stars burn was advocated by Arthur Eddington in the 1920s. At the time, the temperature of the Sun was considered to be too low to overcome the Coulomb barrier. After the development of quantum mechanics, it was discovered that tunneling of the wavefunctions of the protons through the repulsive barrier allows for fusion at a lower temperature than the classical prediction.

In 1939, Hans Bethe attempted to calculate the rates of various reactions in stars. Starting with two protons combining to give deuterium and a positron he found what we now call Branch II of the proton-proton chain reaction. But he did not consider the reaction of two 3He nuclei (Branch I) which we now know to be important.[5] This was part of the body of work in stellar nucleosynthesis for which Bethe won the Nobel Prize in Physics in 1967.

The first step in all the branches is the fusion of two protons into deuterium. As the protons fuse, one of them undergoes beta plus decay, converting into a neutron by emitting a positron and an electron neutrino.[6]

The positron will probably annihilate with an electron from the environment into two gamma rays. Including this annihilation and the energy of the neutrino, the whole reaction has a Q value (released energy) of 1.442 MeV.[6] The relative amounts of energy going to the neutrino and to the other products is variable.

This reaction is extremely slow due to it being initiated by the weak nuclear force. The average proton in the core of the Sun waits 9 billion years before it successfully fuses with another proton. It has not been possible to measure the cross-section of this reaction experimentally because of these long time scales.[7]

After it is formed, the deuterium produced in the first stage can fuse with another proton to produce the light isotope of helium, 3He:

This process, mediated by the strong nuclear force rather than the weak force, is extremely fast by comparison to the first step. It is estimated that, under the conditions in the Sun's core, each newly created deuterium nucleus exists for only about four seconds before it is converted to helium-3.

In the Sun, each helium-3 nucleus produced in these reactions exists for only about 400 years before it is converted into helium-4.[8] Once the helium-3 has been produced, there are four possible paths to generate 4He. In p–p I, helium-4 is produced by fusing two helium-3 nuclei; the p–p II and p–p III branches fuse 3He with pre-existing 4He to form beryllium-7, which undergoes further reactions to produce two helium-4 nuclei.

There is also the extremely rare p–p IV branch. Other even rarer reactions may occur. The rate of these reactions is very low due to very small cross-sections, or because the number of reacting particles is so low that any reactions that might happen are statistically insignificant. This is partly why no mass-5 or mass-8 elements are seen. While the reactions that would produce them, such as a proton + helium-4 producing lithium-5, or two helium-4 nuclei coming together to form beryllium-8, may actually happen, these elements are not detected because there are no stable (or even particle-bound) isotopes of atomic masses 5 or 8; the resulting products immediately decay into their initial reactants.

The overall reaction is:

releasing 26.73 MeV of energy, some of which is lost to the neutrinos.

The complete p–p I chain reaction releases a net energy of 26.732 MeV.[10] Two percent of this energy is lost to the neutrinos that are produced.[11] The p–p I branch is dominant at temperatures of 10 to 14 MK. 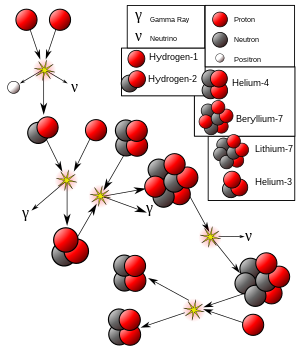 The p–p II branch is dominant at temperatures of 14 to 23 MK.

Note that the energies in the second reaction above are the energies of the neutrinos that are produced by the reaction. 90 percent of the neutrinos produced in the reaction of 7Be to 7Li carry an energy of 0.861 MeV, while the remaining 10 percent carry 0.383 MeV. The difference is whether the lithium-7 produced is in the ground state or an excited (metastable) state, respectively. The total energy released going from 7Be to stable 7Li is about 0.862 MeV, almost all of which is lost to the neutrino if the decay goes directly to the stable lithium.

The last three stages of this chain contribute a total of 18.21 MeV.

The p–p III chain is dominant if the temperature exceeds 23 MK.

The p–p III chain is not a major source of energy in the Sun (only 0.11 percent), but it was very important in the solar neutrino problem because it generates very high energy neutrinos (up to 14.06 MeV).

This reaction is predicted theoretically, but it has never been observed due to its rarity (about 0.3 ppm in the Sun). In this reaction, helium-3 captures a proton directly to give helium-4, with an even higher possible neutrino energy (up to 18.8 MeV).

The mass-energy relationship gives 19.795 MeV for the energy released by this reaction, some of which is lost to the neutrino.

Comparing the mass of the final helium-4 atom with the masses of the four protons reveals that 0.7 percent of the mass of the original protons has been lost. This mass has been converted into energy, in the form of gamma rays and neutrinos released during each of the individual reactions. The total energy yield of one whole chain is 26.73 MeV.

Energy released as gamma rays will interact with electrons and protons and heat the interior of the Sun. Also kinetic energy of fusion products (e.g. of the two protons and the 42He from the p–p I reaction) increases the temperature of plasma in the Sun. This heating supports the Sun and prevents it from collapsing under its own weight.

Neutrinos do not interact significantly with matter and therefore do not help support the Sun against gravitational collapse. Their energy is lost: the neutrinos in the p–p I, p–p II, and p–p III chains carry away 2.0%, 4.0%, and 28.3% of the energy in those reactions, respectively.[12] 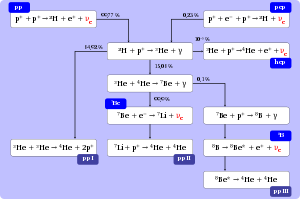 Proton–proton and electron-capture chain reactions in a star

Deuterium can also be produced by the rare pep (proton–electron–proton) reaction (electron capture):

Both the pep and p–p reactions can be seen as two different Feynman representations of the same basic interaction, where the electron passes to the right side of the reaction as a positron. This is represented in the figure of proton–proton and electron-capture chain reactions in a star, available at the NDM'06 web site.[14]