Short description: Process in which two nuclei collide to produce one or more nuclides 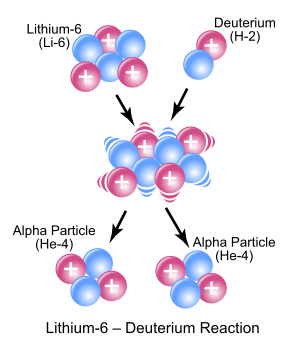 In this symbolic representing of a nuclear reaction, lithium-6 (63Li) and deuterium (21H) react to form the highly excited intermediate nucleus 84Be which then decays immediately into two alpha particles of helium-4 (42He). Protons are symbolically represented by red spheres, and neutrons by blue spheres.

In nuclear physics and nuclear chemistry, a nuclear reaction is a process in which two nuclei, or a nucleus and an external subatomic particle, collide to produce one or more new nuclides. Thus, a nuclear reaction must cause a transformation of at least one nuclide to another. If a nucleus interacts with another nucleus or particle and they then separate without changing the nature of any nuclide, the process is simply referred to as a type of nuclear scattering, rather than a nuclear reaction.

In principle, a reaction can involve more than two particles colliding, but because the probability of three or more nuclei to meet at the same time at the same place is much less than for two nuclei, such an event is exceptionally rare (see triple alpha process for an example very close to a three-body nuclear reaction). The term "nuclear reaction" may refer either to a change in a nuclide induced by collision with another particle or to a spontaneous change of a nuclide without collision.

In 1919, Ernest Rutherford was able to accomplish transmutation of nitrogen into oxygen at the University of Manchester, using alpha particles directed at nitrogen 14N + α → 17O + p.  This was the first observation of an induced nuclear reaction, that is, a reaction in which particles from one decay are used to transform another atomic nucleus. Eventually, in 1932 at Cambridge University, a fully artificial nuclear reaction and nuclear transmutation was achieved by Rutherford's colleagues John Cockcroft and Ernest Walton, who used artificially accelerated protons against lithium-7, to split the nucleus into two alpha particles. The feat was popularly known as "splitting the atom", although it was not the modern nuclear fission reaction later (in 1938) discovered in heavy elements by the German scientists Otto Hahn, Lise Meitner, and Fritz Strassmann.[1]

Nuclear reactions may be shown in a form similar to chemical equations, for which invariant mass must balance for each side of the equation, and in which transformations of particles must follow certain conservation laws, such as conservation of charge and baryon number (total atomic mass number). An example of this notation follows:

Instead of using the full equations in the style above, in many situations a compact notation is used to describe nuclear reactions. This style of the form A(b,c)D is equivalent to A + b producing c + D. Common light particles are often abbreviated in this shorthand, typically p for proton, n for neutron, d for deuteron, α representing an alpha particle or helium-4, β for beta particle or electron, γ for gamma photon, etc. The reaction above would be written as 6Li(d,α)α.[2][3]

Kinetic energy may be released during the course of a reaction (exothermic reaction) or kinetic energy may have to be supplied for the reaction to take place (endothermic reaction). This can be calculated by reference to a table of very accurate particle rest masses,[4] as follows: according to the reference tables, the 63Li nucleus has a standard atomic weight of 6.015 atomic mass units (abbreviated u), the deuterium has 2.014 u, and the helium-4 nucleus has 4.0026 u. Thus:

In a nuclear reaction, the total (relativistic) energy is conserved. The "missing" rest mass must therefore reappear as kinetic energy released in the reaction; its source is the nuclear binding energy. Using Einstein's mass-energy equivalence formula E = mc2, the amount of energy released can be determined. We first need the energy equivalent of one atomic mass unit:

This is a large amount of energy for a nuclear reaction; the amount is so high because the binding energy per nucleon of the helium-4 nucleus is unusually high because the He-4 nucleus is "doubly magic". (The He-4 nucleus is unusually stable and tightly bound for the same reason that the helium atom is inert: each pair of protons and neutrons in He-4 occupies a filled 1s nuclear orbital in the same way that the pair of electrons in the helium atom occupy a filled 1s electron orbital). Consequently, alpha particles appear frequently on the right-hand side of nuclear reactions.

The energy released in a nuclear reaction can appear mainly in one of three ways:

When the product nucleus is metastable, this is indicated by placing an asterisk ("*") next to its atomic number. This energy is eventually released through nuclear decay.

A small amount of energy may also emerge in the form of X-rays. Generally, the product nucleus has a different atomic number, and thus the configuration of its electron shells is wrong. As the electrons rearrange themselves and drop to lower energy levels, internal transition X-rays (X-rays with precisely defined emission lines) may be emitted.

For the particular case discussed above, the reaction energy has already been calculated as Q = 22.2 MeV. Hence:

The reaction energy (the "Q-value") is positive for exothermal reactions and negative for endothermal reactions, opposite to the similar expression in chemistry. On the one hand, it is the difference between the sums of kinetic energies on the final side and on the initial side. But on the other hand, it is also the difference between the nuclear rest masses on the initial side and on the final side (in this way, we have calculated the Q-value above).

If the reaction equation is balanced, that does not mean that the reaction really occurs. The rate at which reactions occur depends on the energy and the flux of the incident particles, and the reaction cross section. An example of a large repository of reaction rates is the REACLIB database, as maintained by the Joint Institute for Nuclear Astrophysics.

In the initial collision which begins the reaction, the particles must approach closely enough so that the short-range strong force can affect them. As most common nuclear particles are positively charged, this means they must overcome considerable electrostatic repulsion before the reaction can begin. Even if the target nucleus is part of a neutral atom, the other particle must penetrate well beyond the electron cloud and closely approach the nucleus, which is positively charged. Thus, such particles must be first accelerated to high energy, for example by:

Neutrons, on the other hand, have no electric charge to cause repulsion, and are able to initiate a nuclear reaction at very low energies. In fact, at extremely low particle energies (corresponding, say, to thermal equilibrium at room temperature), the neutron's de Broglie wavelength is greatly increased, possibly greatly increasing its capture cross-section, at energies close to resonances of the nuclei involved. Thus low-energy neutrons may be even more reactive than high-energy neutrons.

While the number of possible nuclear reactions is immense, there are several types that are more common, or otherwise notable. Some examples include:

An intermediate energy projectile transfers energy or picks up or loses nucleons to the nucleus in a single quick (10−21 second) event. Energy and momentum transfer are relatively small. These are particularly useful in experimental nuclear physics, because the reaction mechanisms are often simple enough to calculate with sufficient accuracy to probe the structure of the target nucleus.

Only energy and momentum are transferred.

Energy and charge are transferred between projectile and target. Some examples of this kind of reactions are:

Usually at moderately low energy, one or more nucleons are transferred between the projectile and target. These are useful in studying outer shell structure of nuclei. Transfer reactions can occur, from the projectile to the target; stripping reactions, or from the target to the projectile; pick-up reactions.

Reactions with neutrons are important in nuclear reactors and nuclear weapons. While the best-known neutron reactions are neutron scattering, neutron capture, and nuclear fission, for some light nuclei (especially odd-odd nuclei) the most probable reaction with a thermal neutron is a transfer reaction:

Some reactions are only possible with fast neutrons:

Either a low-energy projectile is absorbed or a higher energy particle transfers energy to the nucleus, leaving it with too much energy to be fully bound together. On a time scale of about 10−19 seconds, particles, usually neutrons, are "boiled" off. That is, it remains together until enough energy happens to be concentrated in one neutron to escape the mutual attraction. The excited quasi-bound nucleus is called a compound nucleus.