In mathematical logic, in particular in first-order logic, a quantifier achieves a similar task, operating on a mathematical formula rather than an English sentence.

More precisely, a quantifier specifies the quantity of specimens in the domain of discourse that satisfy an open formula. The two most common formal quantifiers are "for each" (traditionally symbolized by "∀"), and "there exists some" ("∃").[3] For example, in arithmetic, quantifiers allow one to say that the natural numbers go on forever, by writing that "for each natural number n, there exists some natural number m that is bigger than n"; this can be written formally as "∀n∈ℕ. ∃m∈ℕ. m>n".[4] The above English examples could be formalized as "∀p∈P. m(p)",[5] "∃p∈P. m(p)", and "¬ ∃p∈P. m(p)",[6] respectively, when P denotes the set of all people, and m(p) denotes "p is mortal".

A formula beginning with a quantifier is called a quantified formula. A formal quantifier requires a variable, which is said to be bound by it, and a subformula specifying a property of that variable.

Formal quantifiers have been generalized beginning with the work of Mostowski and Lindström.

Relations to logical conjunction and disjunction

For a finite domain of discourse D = {a1,...an} the universal quantifier is equivalent to a logical conjunction of propositions with singular terms ai having the form Pai for monadic predicates.

The existential quantifier is equivalent to a logical disjunction of propositions having the same structure as before. For infinite domains of discourse the equivalences are similar.

This has the appearance of an infinite conjunction of propositions. From the point of view of formal languages this is immediately a problem, since syntax rules are expected to generate finite words.

The example above is fortunate in that there is a procedure to generate all the conjuncts. However, if an assertion were to be made about every irrational number, there would be no way to enumerate all the conjuncts, since irrationals cannot be enumerated. A succinct equivalent formulation which avoids these problems uses universal quantification:

A similar analysis applies to the disjunction,

which can be rephrased using existential quantification:

It is possible to devise abstract algebras whose models include formal languages with quantification, but progress has been slow[clarification needed] and interest in such algebra has been limited. Three approaches have been devised to date:

An example of translating a quantified statement in a natural language such as English would be as follows. Given the statement, "Each of Peter's friends either likes to dance or likes to go to the beach (or both)", key aspects can be identified and rewritten using symbols including quantifiers. So, let X be the set of all Peter's friends, P(x) the predicate "x likes to dance", and Q(x) the predicate "x likes to go to the beach". Then the above sentence can be written in formal notation as [math]\displaystyle{ \forall{x}{\in}X, P(x) \lor Q(x) }[/math], which is read, "for every x that is a member of X, P applies to x or Q applies to x".

Some other quantified expressions are constructed as follows,

for a formula P. These two expressions (using the definitions above) are read as "there exists a friend of Peter who likes to dance" and "all friends of Peter like to dance" respectively. Variant notations include, for set X and set members x:

One can use any variable as a quantified variable in place of any other, under certain restrictions in which variable capture does not occur. Even if the notation uses typed variables, variables of that type may be used.

Informally or in natural language, the "∀x" or "∃x" might appear after or in the middle of P(x). Formally, however, the phrase that introduces the dummy variable is placed in front.

Mathematical formulas mix symbolic expressions for quantifiers with natural language quantifiers such as,

Keywords for uniqueness quantification include:

For exactly one natural number x, ...
There is one and only one x such that ....

Further, x may be replaced by a pronoun. For example,

The order of quantifiers is critical to meaning, as is illustrated by the following two propositions:

This is clearly true; it just asserts that every natural number has a square. The meaning of the assertion in which the order of quantifiers is inversed is different:

This is clearly false; it asserts that there is a single natural number s that is at the same time the square of every natural number. This is because the syntax directs that any variable cannot be a function of subsequently introduced variables.

A less trivial example from mathematical analysis are the concepts of uniform and pointwise continuity, whose definitions differ only by an exchange in the positions of two quantifiers. A function f from R to R is called

In the former case, the particular value chosen for δ can be a function of both ε and x, the variables that precede it. In the latter case, δ can be a function only of ε, i.e. it has to be chosen independent of x. For example, f(x) = x2 satisfies pointwise, but not uniform continuity. In contrast, interchanging the two initial universal quantifiers in the definition of pointwise continuity does not change the meaning.

The maximum depth of nesting of quantifiers in a formula is called its quantifier rank.

If D is a domain of x and P(x) is a predicate dependent on object variable x, then the universal proposition can be expressed as

This notation is known as restricted or relativized or bounded quantification. Equivalently one can write,

The existential proposition can be expressed with bounded quantification as

Together with negation, only one of either the universal or existential quantifier is needed to perform both tasks:

which shows that to disprove a "for all x" proposition, one needs no more than to find an x for which the predicate is false. Similarly,

to disprove a "there exists an x" proposition, one needs to show that the predicate is false for all x.

For some natural number n, n is even and n is prime

For some even number n, n is prime.

In some mathematical theories a single domain of discourse fixed in advance is assumed. For example, in Zermelo–Fraenkel set theory, variables range over all sets. In this case, guarded quantifiers can be used to mimic a smaller range of quantification. Thus in the example above to express

in Zermelo–Fraenkel set theory, it can be said

where N is the set of all natural numbers.

Mathematical semantics is the application of mathematics to study the meaning of expressions in a formal language. It has three elements: a mathematical specification of a class of objects via syntax, a mathematical specification of various semantic domains and the relation between the two, which is usually expressed as a function from syntactic objects to semantic ones. This article only addresses the issue of how quantifier elements are interpreted. The syntax of a formula can be given by a syntax tree. A quantifier has a scope, and an occurrence of a variable x is free if it is not within the scope of a quantification for that variable. Thus in 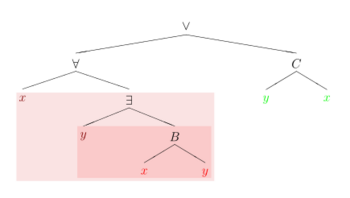 The semantics for uniqueness quantification requires first-order predicate calculus with equality. This means there is given a distinguished two-placed predicate "="; the semantics is also modified accordingly so that "=" is always interpreted as the two-place equality relation on X. The interpretation of

then is the function of n-1 arguments, which is the logical and of the interpretations of

Each kind of quantification defines a corresponding closure operator on the set of formulas, by adding, for each free variable x, a quantifier to bind x.[7] For example, the existential closure of the open formula n>2 ∧ xn+yn=zn is the closed formula ∃n ∃x ∃y ∃z (n>2 ∧ xn+yn=zn); the latter formula, when interpreted over the natural numbers, is known to be false by Fermat's last theorem. As another example, equational axioms, like x+y=y+x, are usually meant to denote their univeral closure, like ∀x ∀y (x+y=y+x) to express commutativity.

One possible interpretation mechanism can be obtained as follows: Suppose that in addition to a semantic domain X, we have given a probability measure P defined on X and cutoff numbers 0 < a ≤ b ≤ 1. If A is a formula with free variables x1,...,xn whose interpretation is the function F of variables v1,...,vn then the interpretation of

and F otherwise. Similarly, the interpretation of

A few other quantifiers have been proposed over time. In particular, the solution quantifier,[8]:28 noted § (section sign) and read "those". For example,

Contrary to the other quantifiers, § yields a set rather than a formula.[9]

Some other quantifiers sometimes used in mathematics include:

Term logic, also called Aristotelian logic, treats quantification in a manner that is closer to natural language, and also less suited to formal analysis. Term logic treated All, Some and No in the 4th century BC, in an account also touching on the alethic modalities.

In 1827, George Bentham published his Outline of a new system of logic, with a critical examination of Dr Whately's Elements of Logic, describing the principle of the quantifier, but the book was not widely circulated.[10] 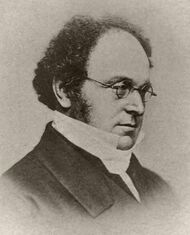 William Hamilton claimed to have coined the terms "quantify" and "quantification", most likely in his Edinburgh lectures c. 1840. Augustus De Morgan confirmed this in 1847, but modern usage began with De Morgan in 1862 where he makes statements such as "We are to take in both all and some-not-all as quantifiers".[11]

Gottlob Frege, in his 1879 Begriffsschrift, was the first to employ a quantifier to bind a variable ranging over a domain of discourse and appearing in predicates. He would universally quantify a variable (or relation) by writing the variable over a dimple in an otherwise straight line appearing in his diagrammatic formulas. Frege did not devise an explicit notation for existential quantification, instead employing his equivalent of ~∀x~, or contraposition. Frege's treatment of quantification went largely unremarked until Bertrand Russell's 1903 Principles of Mathematics.

In work that culminated in Peirce (1885), Charles Sanders Peirce and his student Oscar Howard Mitchell independently invented universal and existential quantifiers, and bound variables. Peirce and Mitchell wrote Πx and Σx where we now write ∀x and ∃x. Peirce's notation can be found in the writings of Ernst Schröder, Leopold Loewenheim, Thoralf Skolem, and Polish logicians into the 1950s. Most notably, it is the notation of Kurt Gödel's landmark 1930 paper on the completeness of first-order logic, and 1931 paper on the incompleteness of Peano arithmetic.

Peirce's approach to quantification also influenced William Ernest Johnson and Giuseppe Peano, who invented yet another notation, namely (x) for the universal quantification of x and (in 1897) ∃x for the existential quantification of x. Hence for decades, the canonical notation in philosophy and mathematical logic was (x)P to express "all individuals in the domain of discourse have the property P," and "(∃x)P" for "there exists at least one individual in the domain of discourse having the property P." Peano, who was much better known than Peirce, in effect diffused the latter's thinking throughout Europe. Peano's notation was adopted by the Principia Mathematica of Whitehead and Russell, Quine, and Alonzo Church. In 1935, Gentzen introduced the ∀ symbol, by analogy with Peano's ∃ symbol. ∀ did not become canonical until the 1960s.

Around 1895, Peirce began developing his existential graphs, whose variables can be seen as tacitly quantified. Whether the shallowest instance of a variable is even or odd determines whether that variable's quantification is universal or existential. (Shallowness is the contrary of depth, which is determined by the nesting of negations.) Peirce's graphical logic has attracted some attention in recent years by those researching heterogeneous reasoning and diagrammatic inference.