In Einsteinian relativity, reference frames are used to specify the relationship between a moving observer and the phenomenon or phenomena under observation. In this context, the phrase often becomes "observational frame of reference" (or "observational reference frame"), which implies that the observer is at rest in the frame, although not necessarily located at its origin. A relativistic reference frame includes (or implies) the coordinate time, which does not correspond across different frames moving relatively to each other. The situation thus differs from Galilean relativity, where all possible coordinate times are essentially equivalent.

Different aspects of "frame of reference" 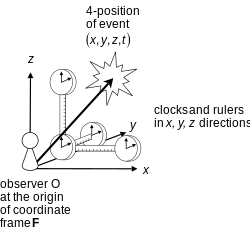 An observer O, situated at the origin of a local set of coordinates – a frame of reference F. The observer in this frame uses the coordinates (x, y, z, t) to describe a spacetime event, shown as a star.

A coordinate system in mathematics is a facet of geometry or of algebra,[15][16] in particular, a property of manifolds (for example, in physics, configuration spaces or phase spaces).[17][18] The coordinates of a point r in an n-dimensional space are simply an ordered set of n numbers:[19][20]

In a general Banach space, these numbers could be (for example) coefficients in a functional expansion like a Fourier series. In a physical problem, they could be spacetime coordinates or normal mode amplitudes. In a robot design, they could be angles of relative rotations, linear displacements, or deformations of joints.[21] Here we will suppose these coordinates can be related to a Cartesian coordinate system by a set of functions:

where x, y, z, etc. are the n Cartesian coordinates of the point. Given these functions, coordinate surfaces are defined by the relations:

which can be normalized to be of unit length. For more detail see curvilinear coordinates.

where repeated indices are summed over.

General and specific topics of coordinate systems can be pursued following the See also links below. 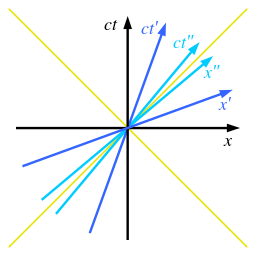 Three frames of reference in special relativity. The black frame is at rest. The primed frame moves at 40% of light speed, and the double primed frame at 80%. Note the scissors-like change as speed increases.

An observational frame of reference, often referred to as a physical frame of reference, a frame of reference, or simply a frame, is a physical concept related to an observer and the observer's state of motion. Here we adopt the view expressed by Kumar and Barve: an observational frame of reference is characterized only by its state of motion.[25] However, there is lack of unanimity on this point. In special relativity, the distinction is sometimes made between an observer and a frame. According to this view, a frame is an observer plus a coordinate lattice constructed to be an orthonormal right-handed set of spacelike vectors perpendicular to a timelike vector. See Doran.[26] This restricted view is not used here, and is not universally adopted even in discussions of relativity.[27][28] In general relativity the use of general coordinate systems is common (see, for example, the Schwarzschild solution for the gravitational field outside an isolated sphere[29]).

There are two types of observational reference frame: inertial and non-inertial. An inertial frame of reference is defined as one in which all laws of physics take on their simplest form. In special relativity these frames are related by Lorentz transformations, which are parametrized by rapidity. In Newtonian mechanics, a more restricted definition requires only that Newton's first law holds true; that is, a Newtonian inertial frame is one in which a free particle travels in a straight line at constant speed, or is at rest. These frames are related by Galilean transformations. These relativistic and Newtonian transformations are expressed in spaces of general dimension in terms of representations of the Poincaré group and of the Galilean group.

A further aspect of a frame of reference is the role of the measurement apparatus (for example, clocks and rods) attached to the frame (see Norton quote above). This question is not addressed in this article, and is of particular interest in quantum mechanics, where the relation between observer and measurement is still under discussion (see measurement problem).

In physics experiments, the frame of reference in which the laboratory measurement devices are at rest is usually referred to as the laboratory frame or simply "lab frame." An example would be the frame in which the detectors for a particle accelerator are at rest. The lab frame in some experiments is an inertial frame, but it is not required to be (for example the laboratory on the surface of the Earth in many physics experiments is not inertial). In particle physics experiments, it is often useful to transform energies and momenta of particles from the lab frame where they are measured, to the center of momentum frame "COM frame" in which calculations are sometimes simplified, since potentially all kinetic energy still present in the COM frame may be used for making new particles.

In this connection it may be noted that the clocks and rods often used to describe observers' measurement equipment in thought, in practice are replaced by a much more complicated and indirect metrology that is connected to the nature of the vacuum, and uses atomic clocks that operate according to the standard model and that must be corrected for gravitational time dilation.[30] (See second, meter and kilogram).

In fact, Einstein felt that clocks and rods were merely expedient measuring devices and they should be replaced by more fundamental entities based upon, for example, atoms and molecules.[31]

Examples of inertial frames of reference 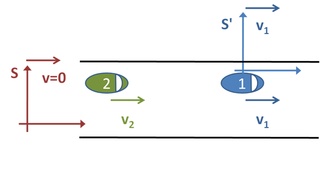 Consider a situation common in everyday life. Two cars travel along a road, both moving at constant velocities. See Figure 1. At some particular moment, they are separated by 200 metres. The car in front is travelling at 22 metres per second and the car behind is travelling at 30 metres per second. If we want to find out how long it will take the second car to catch up with the first, there are three obvious "frames of reference" that we could choose.

First, we could observe the two cars from the side of the road. We define our "frame of reference" S as follows. We stand on the side of the road and start a stop-clock at the exact moment that the second car passes us, which happens to be when they are a distance d = 200 m apart. Since neither of the cars is accelerating, we can determine their positions by the following formulas, where [math]\displaystyle{ x_1(t) }[/math] is the position in meters of car one after time t in seconds and [math]\displaystyle{ x_2(t) }[/math] is the position of car two after time t.

It would have been possible to choose a rotating, accelerating frame of reference, moving in a complicated manner, but this would have served to complicate the problem unnecessarily. It is also necessary to note that one is able to convert measurements made in one coordinate system to another. For example, suppose that your watch is running five minutes fast compared to the local standard time. If you know that this is the case, when somebody asks you what time it is, you are able to deduct five minutes from the time displayed on your watch in order to obtain the correct time. The measurements that an observer makes about a system depend therefore on the observer's frame of reference (you might say that the bus arrived at 5 past three, when in fact it arrived at three).

For a simple example involving only the orientation of two observers, consider two people standing, facing each other on either side of a north-south street. See Figure 2. A car drives past them heading south. For the person facing east, the car was moving towards the right. However, for the person facing west, the car was moving toward the left. This discrepancy is because the two people used two different frames of reference from which to investigate this system.

For a more complex example involving observers in relative motion, consider Alfred, who is standing on the side of a road watching a car drive past him from left to right. In his frame of reference, Alfred defines the spot where he is standing as the origin, the road as the x-axis and the direction in front of him as the positive y-axis. To him, the car moves along the x axis with some velocity v in the positive x-direction. Alfred's frame of reference is considered an inertial frame of reference because he is not accelerating (ignoring effects such as Earth's rotation and gravity).

It is important to note some assumptions made above about the various inertial frames of reference. Newton, for instance, employed universal time, as explained by the following example. Suppose that you own two clocks, which both tick at exactly the same rate. You synchronize them so that they both display exactly the same time. The two clocks are now separated and one clock is on a fast moving train, traveling at constant velocity towards the other. According to Newton, these two clocks will still tick at the same rate and will both show the same time. Newton says that the rate of time as measured in one frame of reference should be the same as the rate of time in another. That is, there exists a "universal" time and all other times in all other frames of reference will run at the same rate as this universal time irrespective of their position and velocity. This concept of time and simultaneity was later generalized by Einstein in his special theory of relativity (1905) where he developed transformations between inertial frames of reference based upon the universal nature of physical laws and their economy of expression (Lorentz transformations).

The definition of inertial reference frame can also be extended beyond three-dimensional Euclidean space. Newton's assumed a Euclidean space, but general relativity uses a more general geometry. As an example of why this is important, consider the geometry of an ellipsoid. In this geometry, a "free" particle is defined as one at rest or traveling at constant speed on a geodesic path. Two free particles may begin at the same point on the surface, traveling with the same constant speed in different directions. After a length of time, the two particles collide at the opposite side of the ellipsoid. Both "free" particles traveled with a constant speed, satisfying the definition that no forces were acting. No acceleration occurred and so Newton's first law held true. This means that the particles were in inertial frames of reference. Since no forces were acting, it was the geometry of the situation which caused the two particles to meet each other again. In a similar way, it is now common to describe[32] that we exist in a four-dimensional geometry known as spacetime. In this picture, the curvature of this 4D space is responsible for the way in which two bodies with mass are drawn together even if no forces are acting. This curvature of spacetime replaces the force known as gravity in Newtonian mechanics and special relativity.

Here the relation between inertial and non-inertial observational frames of reference is considered. The basic difference between these frames is the need in non-inertial frames for fictitious forces, as described below.

An accelerated frame of reference is often delineated as being the "primed" frame, and all variables that are dependent on that frame are notated with primes, e.g. x′, y′, a′.

Taking the first and second derivatives of this with respect to time, we obtain

These equations allow transformations between the two coordinate systems; for example, we can now write Newton's second law as

A common sort of accelerated reference frame is a frame that is both rotating and translating (an example is a frame of reference attached to a CD which is playing while the player is carried). This arrangement leads to the equation (see Fictitious force for a derivation):

Multiplying through by the mass m gives

Particular frames of reference in common use