In nuclear physics, the semi-empirical mass formula (SEMF) (sometimes also called the Weizsäcker formula, Bethe–Weizsäcker formula, or Bethe–Weizsäcker mass formula to distinguish it from the Bethe–Weizsäcker process) is used to approximate the mass and various other properties of an atomic nucleus from its number of protons and neutrons. As the name suggests, it is based partly on theory and partly on empirical measurements. The formula represents the liquid-drop model proposed by George Gamow,[1] which can account for most of the terms in the formula and gives rough estimates for the values of the coefficients. It was first formulated in 1935 by German physicist Carl Friedrich von Weizsäcker,[2] and although refinements have been made to the coefficients over the years, the structure of the formula remains the same today.

The formula gives a good approximation for atomic masses and thereby other effects. However, it fails to explain the existence of lines of greater binding energy at certain numbers of protons and neutrons. These numbers, known as magic numbers, are the foundation of the nuclear shell model.

Illustration of the terms of the semi-empirical mass formula in the liquid-drop model of the atomic nucleus.

The liquid-drop model was first proposed by George Gamow and further developed by Niels Bohr and John Archibald Wheeler. It treats the nucleus as a drop of incompressible fluid of very high density, held together by the nuclear force (a residual effect of the strong force), there is a similarity to the structure of a spherical liquid drop. While a crude model, the liquid-drop model accounts for the spherical shape of most nuclei and makes a rough prediction of binding energy.

The corresponding mass formula is defined purely in terms of the numbers of protons and neutrons it contains. The original Weizsäcker formula defines five terms: 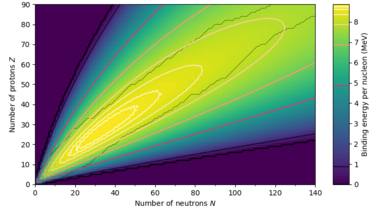 The binding energy per nucleon (in MeV) shown as a function of the neutron number N and atomic number Z as given by the semi-empirical mass formula. A dashed line is included to show nuclides that have been discovered by experiment. 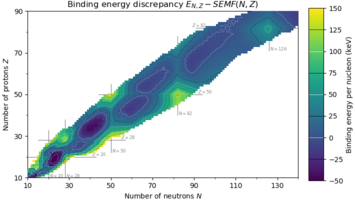 The difference between the energies predicted and that of known binding energies, given in kiloelectronvolts. Phenomena present can be explained by further subtle terms, but the mass formula cannot explain the presence of lines, clearly identifiable by sharp peaks in contours.

The basis for this term is the strong nuclear force. The strong force affects both protons and neutrons, and as expected, this term is independent of Z. Because the number of pairs that can be taken from A particles is [math]\displaystyle{ A(A - 1)/2 }[/math], one might expect a term proportional to [math]\displaystyle{ A^2 }[/math]. However, the strong force has a very limited range, and a given nucleon may only interact strongly with its nearest neighbors and next nearest neighbors. Therefore, the number of pairs of particles that actually interact is roughly proportional to A, giving the volume term its form.

The term [math]\displaystyle{ a_\text{S} A^{2/3} }[/math] is known as the surface term. This term, also based on the strong force, is a correction to the volume term.

The volume term suggests that each nucleon interacts with a constant number of nucleons, independent of A. While this is very nearly true for nucleons deep within the nucleus, those nucleons on the surface of the nucleus have fewer nearest neighbors, justifying this correction. This can also be thought of as a surface-tension term, and indeed a similar mechanism creates surface tension in liquids.

The basis for this term is the electrostatic repulsion between protons. To a very rough approximation, the nucleus can be considered a sphere of uniform charge density. The potential energy of such a charge distribution can be shown to be

Using the fine-structure constant, we can rewrite the value of [math]\displaystyle{ a_\text{C} }[/math] as 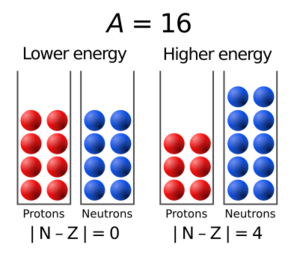 The theoretical justification for this term is more complex. The Pauli exclusion principle states that no two identical fermions can occupy exactly the same quantum state in an atom. At a given energy level, there are only finitely many quantum states available for particles. What this means in the nucleus is that as more particles are "added", these particles must occupy higher energy levels, increasing the total energy of the nucleus (and decreasing the binding energy). Note that this effect is not based on any of the fundamental forces (gravitational, electromagnetic, etc.), only the Pauli exclusion principle.

Protons and neutrons, being distinct types of particles, occupy different quantum states. One can think of two different "pools" of states – one for protons and one for neutrons. Now, for example, if there are significantly more neutrons than protons in a nucleus, some of the neutrons will be higher in energy than the available states in the proton pool. If we could move some particles from the neutron pool to the proton pool, in other words, change some neutrons into protons, we would significantly decrease the energy. The imbalance between the number of protons and neutrons causes the energy to be higher than it needs to be, for a given number of nucleons. This is the basis for the asymmetry term.

The actual form of the asymmetry term can again be derived by modeling the nucleus as a Fermi ball of protons and neutrons. Its total kinetic energy is

[math]\displaystyle{ \varepsilon_\text{F} }[/math] is 38 MeV, so calculating [math]\displaystyle{ a_\text{A} }[/math] from the equation above, we get only half the measured value. The discrepancy is explained by our model not being accurate: nucleons in fact interact with each other and are not spread evenly across the nucleus. For example, in the shell model, a proton and a neutron with overlapping wavefunctions will have a greater strong interaction between them and stronger binding energy. This makes it energetically favourable (i.e. having lower energy) for protons and neutrons to have the same quantum numbers (other than isospin), and thus increase the energy cost of asymmetry between them.

Magnitude of the pairing term in the total binding energy for even–even and odd–odd nuclei, as a function of mass number. Two fits are shown (blue and red line). The pairing term (positive for even–even and negative for odd–odd nuclei) was derived from the binding energy data in: G. Audi et al., "The AME2012 atomic mass evaluation", in Chinese Physics C, 36 (2012/12) pp. 1287–1602.

The term [math]\displaystyle{ \delta(A, Z) }[/math] is known as the pairing term (possibly also known as the pairwise interaction). This term captures the effect of spin coupling. It is given by[5]

where [math]\displaystyle{ \delta_0 }[/math] is found empirically to have a value of about 1000 keV, slowly decreasing with mass number A. The binding energy may be increased by converting one of the odd protons or neutrons into a neutron or proton, so the odd nucleon can form a pair with its odd neighbour forming[clarification needed] and even Z, N. The pair have overlapping wave functions and sit very close together with a bond stronger than any other configuration.[5] When the pairing term is substituted into the binding energy equation, for even Z, N, the pairing term adds binding energy, and for odd Z, N the pairing term removes binding energy.

The dependence on mass number is commonly parametrized as

The value of the exponent kP is determined from experimental binding-energy data. In the past its value was often assumed to be −3/4, but modern experimental data indicate that a value of −1/2 is nearer the mark:

The factor [math]\displaystyle{ A^{k_\text{P}} }[/math] is not easily explained theoretically. The Fermi-ball calculation we have used above, based on the liquid-drop model but neglecting interactions, will give an [math]\displaystyle{ A^{-1} }[/math] dependence, as in the asymmetry term. This means that the actual effect for large nuclei will be larger than expected by that model. This should be explained by the interactions between nucleons. For example, in the shell model, two protons with the same quantum numbers (other than spin) will have completely overlapping wavefunctions and will thus have greater strong interaction between them and stronger binding energy. This makes it energetically favourable (i.e. having lower energy) for protons to form pairs of opposite spin. The same is true for neutrons.

The coefficients are calculated by fitting to experimentally measured masses of nuclei. Their values can vary depending on how they are fitted to the data and which unit is used to express the mass. Several examples are as shown below.

The formula does not consider the internal shell structure of the nucleus.

The semi-empirical mass formula therefore provides a good fit to heavier nuclei, and a poor fit to very light nuclei, especially 4He. For light nuclei, it is usually better to use a model that takes this shell structure into account.

Examples of consequences of the formula

By maximizing Eb(A, Z) with respect to Z, one would find the best neutron–proton ratio N/Z for a given atomic weight A.[8] We get

This is roughly 1 for light nuclei, but for heavy nuclei the ratio grows in good agreement with experiment.

By substituting the above value of Z back into Eb, one obtains the binding energy as a function of the atomic weight, Eb(A). Maximizing Eb(A)/A with respect to A gives the nucleus which is most strongly bound, i.e. most stable. The value we get is A = 63 (copper), close to the measured values of A = 62 (nickel) and A = 58 (iron).

The liquid-drop model also allows the computation of fission barriers for nuclei, which determine the stability of a nucleus against spontaneous fission. It was originally speculated that elements beyond atomic number 104 could not exist, as they would undergo fission with very short half-lives,[10] though this formula did not consider stabilizing effects of closed nuclear shells. A modified formula considering shell effects reproduces known data and the predicted island of stability (in which fission barriers and half-lives are expected to increase, reaching a maximum at the shell closures), though also suggests a possible limit to existence of superheavy nuclei beyond Z = 120 and N = 184.[10]