Short description: Activation energy required for a nucleus of an atom to undergo fission 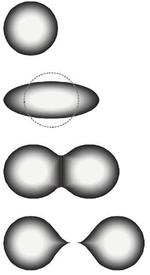 An induced fission reaction. A nucleus becomes excited by some nuclear process and then splits into lighter elements (fission products). This releases a small amount of neutrons and prompt gamma radiation, followed by the beta decay of the lighter nuclei with additional gamma radiation released.[1]

In nuclear physics and nuclear chemistry, the fission barrier is the activation energy required for a nucleus of an atom to undergo fission. This barrier may also be defined as the minimum amount of energy required to deform the nucleus to the point where it is irretrievably committed to the fission process. The energy to overcome this barrier can come from either neutron bombardment of the nucleus, where the additional energy from the neutron brings the nucleus to an excited state and undergoes deformation, or through spontaneous fission, where the nucleus is already in an excited and deformed state.

It is important to note that efforts to understand fission processes are still an ongoing and have been a very difficult problem to solve since fission was first discovered by Lise Meitner, Otto Hahn, and Fritz Strassmann in 1938.[2] While nuclear physicists understand many aspects of the fission process, there is currently no encompassing theoretical framework that gives a satisfactory account of the basic observations.

The fission process can be understood when a nucleus with some equilibrium deformation absorbs energy (through neutron capture, for example), becomes excited and deforms to a configuration known as the "transition state" or "saddle point" configuration. As the nucleus deforms, the nuclear Coulomb energy decreases while the nuclear surface energy increases. At the saddle point, the rate of change of the Coulomb energy is equal to the rate of change of the nuclear surface energy. The formation and eventual decay of this transition state nucleus is the rate-determining step in the fission process and corresponds to the passage over an activation energy barrier to the fission reaction. When this occurs, the neck between the nascent fragments disappears and the nucleus divides into two fragments. The point at which this occurs is called the "scission point".[3]

From the description of the beginning of the fission process to the "scission point," it is apparent that the change of the shape of the nucleus is associated with a change of energy of some kind. In fact, it is the change of two types of energies: (1) the macroscopic energy related to the nuclear bulk properties as given by the liquid drop model and (2) the quantum mechanical energy associated with filling the shell model orbitals.[4] For the nuclear bulk properties with small distortions, the surface, [math]\displaystyle{ E_s }[/math], and Coulomb, [math]\displaystyle{ E_c }[/math], energies are given by:

The Coulomb and surface energies of a uniformly charged sphere can be approximated by the following expressions:

The shell corrections, just like the liquid drop energy, are functions of the nuclear deformation. The shell corrections tend to lower the ground state masses of spherical nuclei with magic or near-magic numbers of neutrons and protons. They also tend to lower the ground state mass of mid shell nuclei at some finite deformation thus accounting for the deformed nature of the actinides. Without these shell effects, the heaviest nuclei could not be observed, as they would decay by spontaneous fission on a time scale much shorter than we can observe.