A government is the system or group of people governing an organized community, generally a state.

In the case of its broad associative definition, government normally consists of legislature, executive, and judiciary. Government is a means by which organizational policies are enforced, as well as a mechanism for determining policy. In many countries, the government has a kind of constitution, a statement of its governing principles and philosophy.

While all types of organizations have governance, the term government is often used more specifically to refer to the approximately 200 independent national governments and subsidiary organizations.

Historically prevalent forms of government include monarchy, aristocracy, timocracy, oligarchy, democracy, theocracy and tyranny. The main aspect of any philosophy of government is how political power is obtained, with the two main forms being electoral contest and hereditary succession.

A government is the system to govern a state or community.

The word government derives, ultimately, from the Greek verb κυβερνάω [kubernáo] (meaning to steer with gubernaculum (rudder), the metaphorical sense being attested in Plato's Ship of State).

The Columbia Encyclopedia defines government as "a system of social control under which the right to make laws, and the right to enforce them, is vested in a particular group in society".[1]

While all types of organizations have governance, the word government is often used more specifically to refer to the approximately 200 independent national governments on Earth, as well as their subsidiary organizations.[2]

In British English, "government" is often used to refer to what's known in American English as an "administration", i.e., the policies implemented by, and government officials appointed by, a particular executive or governing coalition.

Finally, government is also sometimes used in English as a synonym for governance.

The moment and place that the phenomenon of human government developed is lost in time; however, history does record the formations of early governments. About 5,000 years ago, the first small city-states appeared.[3] By the third to second millenniums BC, some of these had developed into larger governed areas: Sumer, ancient Egypt, the Indus Valley civilization, and the Yellow River civilization.[4]

The development of agriculture and water control projects were a catalyst for the development of governments.[5] On occasion a chief of a tribe was elected by various rituals or tests of strength to govern his tribe, sometimes with a group of elder tribesmen as a council. The human ability to precisely communicate abstract, learned information allowed humans to become ever more effective at agriculture,[6] and that allowed for ever increasing population densities.[3] David Christian explains how this resulted in states with laws and governments.

As farming populations gathered in larger and denser communities, interactions between different groups increased and the social pressure rose until, in a striking parallel with star formation, new structures suddenly appeared, together with a new level of complexity. Like stars, cities and states reorganize and energize the smaller objects within their gravitational field.[3]

In the nineteenth and twentieth century, there was a significant increase in the size and scale of government at the national level.[8] This included the regulation of corporations and the development of the welfare state.[7]

In political science, it has long been a goal to create a typology or taxonomy of polities, as typologies of political systems are not obvious.[9] It is especially important in the political science fields of comparative politics and international relations. Like all categories discerned within forms of government, the boundaries of government classifications are either fluid or ill-defined.

Superficially, all governments have an official or ideal form. The United States is a constitutional republic, while the former Soviet Union was a socialist republic. However self-identification is not objective, and as Kopstein and Lichbach argue, defining regimes can be tricky.[10] For example, Voltaire argued that "the Holy Roman Empire is neither Holy, nor Roman, nor an Empire".[11]

Other complications include general non-consensus or deliberate "distortion or bias" of reasonable technical definitions to political ideologies and associated forms of governing, due to the nature of politics in the modern era. For example: The meaning of "conservatism" in the United States has little in common with the way the word's definition is used elsewhere. As Ribuffo notes, "what Americans now call conservatism much of the world calls liberalism or neoliberalism"; a "conservative" in Finland would be labeled a "socialist" in the United States.[12] Since the 1950s conservatism in the United States has been chiefly associated with the Republican Party. However, during the era of segregation many Southern Democrats were conservatives, and they played a key role in the Conservative Coalition that controlled Congress from 1937 to 1963.[13]

Opinions vary by individuals concerning the types and properties of governments that exist. "Shades of gray" are commonplace in any government and its corresponding classification. Even the most liberal democracies limit rival political activity to one extent or another while the most tyrannical dictatorships must organize a broad base of support thereby creating difficulties for "pigeonholing" governments into narrow categories. Examples include the claims of the United States as being a plutocracy rather than a democracy since some American voters believe elections are being manipulated by wealthy Super PACs.[14]

The Classical Greek philosopher Plato discusses five types of regimes: aristocracy, timocracy, oligarchy, democracy and tyranny. Plato also assigns a man to each of these regimes to illustrate what they stand for. The tyrannical man would represent tyranny for example. These five regimes progressively degenerate starting with aristocracy at the top and tyranny at the bottom.

One method of classifying governments is through which people have the authority to rule. This can either be one person (an autocracy, such as monarchy), a select group of people (an aristocracy), or the people as a whole (a democracy, such as a republic).

Thomas Hobbes stated on their classification:[15]

An autocracy is a system of government in which supreme power is concentrated in the hands of one person, whose decisions are subject to neither external legal restraints nor regularized mechanisms of popular control (except perhaps for the implicit threat of a coup d'état or mass insurrection).[16]

Aristocracy (Greek ἀριστοκρατία aristokratía, from ἄριστος aristos "excellent", and κράτος kratos "power") is a form of government that places power in the hands of a small, privileged ruling class.[17]

Many monarchies were aristocracies, although in modern constitutional monarchies the monarch himself or herself has little real power. The term aristocracy could also refer to the non-peasant, non-servant, and non-city classes in the feudal system.

A republic is a form of government in which the country is considered a "public matter" (Latin: res publica), not the private concern or property of the rulers, and where offices of states are subsequently directly or indirectly elected or appointed rather than inherited. The people, or some significant portion of them, have supreme control over the government and where offices of state are elected or chosen by elected people.[20][21] A common simplified definition of a republic is a government where the head of state is not a monarch.[22][23] Montesquieu included both democracies, where all the people have a share in rule, and aristocracies or oligarchies, where only some of the people rule, as republican forms of government.[24]

Federalism is a political concept in which a group of members are bound together by covenant with a governing representative head. The term "federalism" is also used to describe a system of government in which sovereignty is constitutionally divided between a central governing authority and constituent political units, variously called states, provinces or otherwise. Federalism is a system based upon democratic principles and institutions in which the power to govern is shared between national and provincial/state governments, creating what is often called a federation. Proponents are often called federalists.

Historically, most political systems originated as socioeconomic ideologies. Experience with those movements in power and the strong ties they may have to particular forms of government can cause them to be considered as forms of government in themselves. 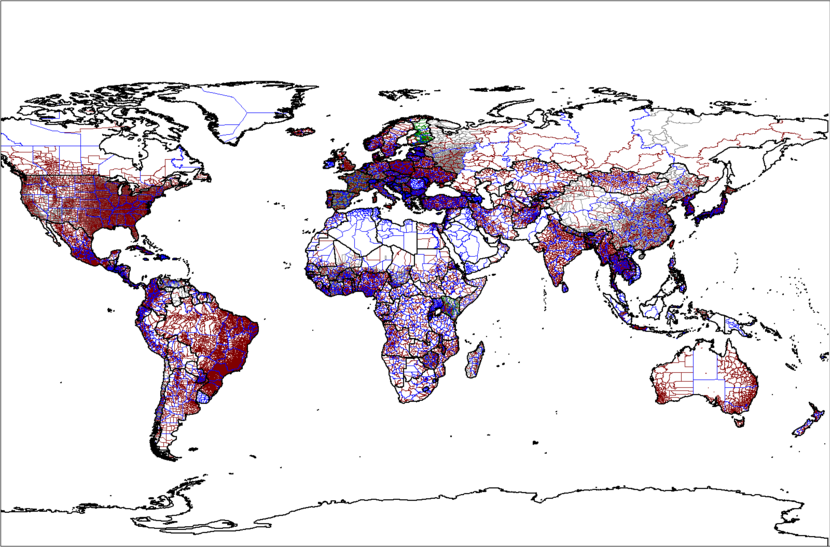 Certain major characteristics are defining of certain types; others are historically associated with certain types of government.

This list focuses on differing approaches that political systems take to the distribution of sovereignty, and the autonomy of regions within the state.