Depending on the type of output, supervised learning problems are either problems of regression or problems of classification. If the output takes a continuous range of values, it is a regression problem. Using Ohm's Law as an example, a regression could be performed with voltage as input and current as an output. The regression would find the functional relationship between voltage and current to be [math]\displaystyle{ R }[/math], such that

Classification problems are those for which the output will be an element from a discrete set of labels. Classification is very common for machine learning applications. In facial recognition, for instance, a picture of a person's face would be the input, and the output label would be that person's name. The input would be represented by a large multidimensional vector whose elements represent pixels in the picture.

A learning algorithm that chooses the function [math]\displaystyle{ f_S }[/math] that minimizes the empirical risk is called empirical risk minimization.

Different loss functions are used depending on whether the problem is one of regression or one of classification.

The absolute value loss (also known as the L1-norm) is also sometimes used:

where [math]\displaystyle{ \theta }[/math] is the Heaviside step function. 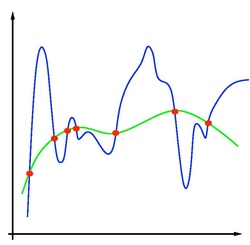 In machine learning problems, a major problem that arises is that of overfitting. Because learning is a prediction problem, the goal is not to find a function that most closely fits the (previously observed) data, but to find one that will most accurately predict output from future input. Empirical risk minimization runs this risk of overfitting: finding a function that matches the data exactly but does not predict future output well.

Overfitting is symptomatic of unstable solutions; a small perturbation in the training set data would cause a large variation in the learned function. It can be shown that if the stability for the solution can be guaranteed, generalization and consistency are guaranteed as well.[6][7] Regularization can solve the overfitting problem and give the problem stability.

where [math]\displaystyle{ \gamma }[/math] is a fixed and positive parameter, the regularization parameter. Tikhonov regularization ensures existence, uniqueness, and stability of the solution.[8]