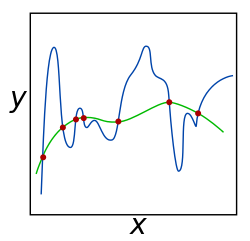 The green and blue functions both incur zero loss on the given data points. A learned model can be induced to prefer the green function, which may generalize better to more points drawn from the underlying unknown distribution, by adjusting [math]\displaystyle{ \lambda }[/math], the weight of the regularization term.

In mathematics, statistics, finance,[1] computer science, particularly in machine learning and inverse problems, regularization is a process that changes the result answer to be "simpler". It is often used to obtain results for ill-posed problems or to prevent overfitting.[2]

Although regularization procedures can be divided in many ways, one particular delineation is particularly helpful:

In explicit regularization, independent of the problem or model, there is always a data term, that corresponds to a likelihood of the measurement and a regularization term that corresponds to a prior. By combining both using Bayesian statistics, one can compute a posterior, that includes both information sources and therefore stabilizes the estimation process. By trading off both objectives, one chooses to be more addictive to the data or to enforce generalization (to prevent overfitting). There is a whole research branch dealing with all possible regularizations. The work flow usually is, that one tries a specific regularization and then figures out the probability density that corresponds to that regularization to justify the choice. It can also be physically motivated by common sense or intuition.

In machine learning, the data term corresponds to the training data and the regularization is either the choice of the model or modifications to the algorithm. It is always intended to reduce the generalization error, i.e. the error score with the trained model on the evaluation set and not the training data.[3]

A regularization term (or regularizer) [math]\displaystyle{ R(f) }[/math] is added to a loss function:

A theoretical justification for regularization is that it attempts to impose Occam's razor on the solution (as depicted in the figure above, where the green function, the simpler one, may be preferred). From a Bayesian point of view, many regularization techniques correspond to imposing certain prior distributions on model parameters.[5]

Regularization can serve multiple purposes, including learning simpler models, inducing models to be sparse and introducing group structure[clarification needed] into the learning problem.

The same idea arose in many fields of science. A simple form of regularization applied to integral equations (Tikhonov regularization) is essentially a trade-off between fitting the data and reducing a norm of the solution. More recently, non-linear regularization methods, including total variation regularization, have become popular.

Regularization can be motivated as a technique to improve the generalizability of a learned model.

Typically in learning problems, only a subset of input data and labels are available, measured with some noise. Therefore, the expected error is unmeasurable, and the best surrogate available is the empirical error over the [math]\displaystyle{ N }[/math] available samples:

Without bounds on the complexity of the function space (formally, the reproducing kernel Hilbert space) available, a model will be learned that incurs zero loss on the surrogate empirical error. If measurements (e.g. of [math]\displaystyle{ x_i }[/math]) were made with noise, this model may suffer from overfitting and display poor expected error. Regularization introduces a penalty for exploring certain regions of the function space used to build the model, which can improve generalization.

These techniques are named for Andrey Nikolayevich Tikhonov, who applied regularization to integral equations and made important contributions in many other areas.

In the case of a general function, the norm of the function in its reproducing kernel Hilbert space is:

As the [math]\displaystyle{ L_2 }[/math] norm is differentiable, learning can be advanced by gradient descent.

Early stopping can be viewed as regularization in time. Intuitively, a training procedure such as gradient descent tends to learn more and more complex functions with increasing iterations. By regularizing for time, model complexity can be controlled, improving generalization.

Early stopping is implemented using one data set for training, one statistically independent data set for validation and another for testing. The model is trained until performance on the validation set no longer improves and then applied to the test set.

Consider the finite approximation of Neumann series for an invertible matrix A where [math]\displaystyle{ \| I-A \| \lt 1 }[/math]:

This can be used to approximate the analytical solution of unregularized least squares, if γ is introduced to ensure the norm is less than one.

The exact solution to the unregularized least squares learning problem minimizes the empirical error, but may fail. By limiting T, the only free parameter in the algorithm above, the problem is regularized for time, which may improve its generalization.

with the gradient descent update:

The base case is trivial. The inductive case is proved as follows:

A comparison between the L1 ball and the L2 ball in two dimensions gives an intuition on how L1 regularization achieves sparsity.

Enforcing a sparsity constraint on [math]\displaystyle{ w }[/math] can lead to simpler and more interpretable models. This is useful in many real-life applications such as computational biology. An example is developing a simple predictive test for a disease in order to minimize the cost of performing medical tests while maximizing predictive power.

Elastic net regularization is commonly used in practice and is implemented in many machine learning libraries.

The proximal method iteratively performs gradient descent and then projects the result back into the space permitted by [math]\displaystyle{ R }[/math].

This allows for efficient computation.

Groups of features can be regularized by a sparsity constraint, which can be useful for expressing certain prior knowledge into an optimization problem.

In the case of a linear model with non-overlapping known groups, a regularizer can be defined:

This can be solved by the proximal method, where the proximal operator is a block-wise soft-thresholding function:

The algorithm described for group sparsity without overlaps can be applied to the case where groups do overlap, in certain situations. This will likely result in some groups with all zero elements, and other groups with some non-zero and some zero elements.

If it is desired to preserve the group structure, a new regularizer can be defined:

When labels are more expensive to gather than input examples, semi-supervised learning can be useful. Regularizers have been designed to guide learning algorithms to learn models that respect the structure of unsupervised training samples. If a symmetric weight matrix [math]\displaystyle{ W }[/math] is given, a regularizer can be defined:

This regularizer defines an L2 norm on each column and an L1 norm over all columns. It can be solved by proximal methods.

This regularizer constrains the functions learned for each task to be similar to the overall average of the functions across all tasks. This is useful for expressing prior information that each task is expected to share with each other task. An example is predicting blood iron levels measured at different times of the day, where each task represents an individual.

This regularizer is similar to the mean-constrained regularizer, but instead enforces similarity between tasks within the same cluster. This can capture more complex prior information. This technique has been used to predict Netflix recommendations. A cluster would correspond to a group of people who share similar preferences.

More generally than above, similarity between tasks can be defined by a function. The regularizer encourages the model to learn similar functions for similar tasks.

Other uses of regularization in statistics and machine learning

Examples of applications of different methods of regularization to the linear model are: