Discriminant analysis is used when groups are known a priori (unlike in cluster analysis). Each case must have a score on one or more quantitative predictor measures, and a score on a group measure.[7] In simple terms, discriminant function analysis is classification - the act of distributing things into groups, classes or categories of the same type.

The original dichotomous discriminant analysis was developed by Sir Ronald Fisher in 1936.[8] It is different from an ANOVA or MANOVA, which is used to predict one (ANOVA) or multiple (MANOVA) continuous dependent variables by one or more independent categorical variables. Discriminant function analysis is useful in determining whether a set of variables is effective in predicting category membership.[9]

Without any further assumptions, the resulting classifier is referred to as quadratic discriminant analysis (QDA).

LDA instead makes the additional simplifying homoscedasticity assumption (i.e. that the class covariances are identical, so [math]\displaystyle{ \Sigma_0 = \Sigma_1 = \Sigma }[/math]) and that the covariances have full rank. In this case, several terms cancel:

for some threshold constant c, where

The assumptions of discriminant analysis are the same as those for MANOVA. The analysis is quite sensitive to outliers and the size of the smallest group must be larger than the number of predictor variables.[7]

Each function is given a discriminant score[clarification needed] to determine how well it predicts group placement.

An eigenvalue in discriminant analysis is the characteristic root of each function.[clarification needed] It is an indication of how well that function differentiates the groups, where the larger the eigenvalue, the better the function differentiates.[7] This however, should be interpreted with caution, as eigenvalues have no upper limit.[9][7] The eigenvalue can be viewed as a ratio of SSbetween and SSwithin as in ANOVA when the dependent variable is the discriminant function, and the groups are the levels of the IV[clarification needed].[9] This means that the largest eigenvalue is associated with the first function, the second largest with the second, etc..

Some suggest the use of eigenvalues as effect size measures, however, this is generally not supported.[9] Instead, the canonical correlation is the preferred measure of effect size. It is similar to the eigenvalue, but is the square root of the ratio of SSbetween and SStotal. It is the correlation between groups and the function.[9] Another popular measure of effect size is the percent of variance[clarification needed] for each function. This is calculated by: (λx/Σλi) X 100 where λx is the eigenvalue for the function and Σλi is the sum of all eigenvalues. This tells us how strong the prediction is for that particular function compared to the others.[9] Percent correctly classified can also be analyzed as an effect size. The kappa value can describe this while correcting for chance agreement.[9]Kappa normalizes across all categorizes rather than biased by a significantly good or poorly performing classes.[clarification needed][16]

Canonical discriminant analysis (CDA) finds axes (k − 1 canonical coordinates, k being the number of classes) that best separate the categories. These linear functions are uncorrelated and define, in effect, an optimal k − 1 space through the n-dimensional cloud of data that best separates (the projections in that space of) the k groups. See “Multiclass LDA” for details below.

The terms Fisher's linear discriminant and LDA are often used interchangeably, although Fisher's original article[1] actually describes a slightly different discriminant, which does not make some of the assumptions of LDA such as normally distributed classes or equal class covariances.

This measure is, in some sense, a measure of the signal-to-noise ratio for the class labelling. It can be shown that the maximum separation occurs when

When the assumptions of LDA are satisfied, the above equation is equivalent to LDA.

Otsu's method is related to Fisher's linear discriminant, and was created to binarize the histogram of pixels in a grayscale image by optimally picking the black/white threshold that minimizes intra-class variance and maximizes inter-class variance within/between grayscales assigned to black and white pixel classes. 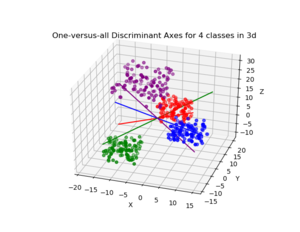 In the case where there are more than two classes, the analysis used in the derivation of the Fisher discriminant can be extended to find a subspace which appears to contain all of the class variability.[17] This generalization is due to C. R. Rao.[18] Suppose that each of C classes has a mean [math]\displaystyle{ \mu_i }[/math] and the same covariance [math]\displaystyle{ \Sigma }[/math]. Then the scatter between class variability may be defined by the sample covariance of the class means

If [math]\displaystyle{ \Sigma^{-1} \Sigma_b }[/math] is diagonalizable, the variability between features will be contained in the subspace spanned by the eigenvectors corresponding to the C − 1 largest eigenvalues (since [math]\displaystyle{ \Sigma_b }[/math] is of rank C − 1 at most). These eigenvectors are primarily used in feature reduction, as in PCA. The eigenvectors corresponding to the smaller eigenvalues will tend to be very sensitive to the exact choice of training data, and it is often necessary to use regularisation as described in the next section.

If classification is required, instead of dimension reduction, there are a number of alternative techniques available. For instance, the classes may be partitioned, and a standard Fisher discriminant or LDA used to classify each partition. A common example of this is "one against the rest" where the points from one class are put in one group, and everything else in the other, and then LDA applied. This will result in C classifiers, whose results are combined. Another common method is pairwise classification, where a new classifier is created for each pair of classes (giving C(C − 1)/2 classifiers in total), with the individual classifiers combined to produce a final classification.

In practice, the class means and covariances are not known. They can, however, be estimated from the training set. Either the maximum likelihood estimate or the maximum a posteriori estimate may be used in place of the exact value in the above equations. Although the estimates of the covariance may be considered optimal in some sense, this does not mean that the resulting discriminant obtained by substituting these values is optimal in any sense, even if the assumption of normally distributed classes is correct.

Another complication in applying LDA and Fisher's discriminant to real data occurs when the number of measurements of each sample (i.e., the dimensionality of each data vector) exceeds the number of samples in each class.[4] In this case, the covariance estimates do not have full rank, and so cannot be inverted. There are a number of ways to deal with this. One is to use a pseudo inverse instead of the usual matrix inverse in the above formulae. However, better numeric stability may be achieved by first projecting the problem onto the subspace spanned by [math]\displaystyle{ \Sigma_b }[/math].[22] Another strategy to deal with small sample size is to use a shrinkage estimator of the covariance matrix, which can be expressed mathematically as

LDA can be generalized to multiple discriminant analysis, where c becomes a categorical variable with N possible states, instead of only two. Analogously, if the class-conditional densities [math]\displaystyle{ p(\vec x\mid c=i) }[/math] are normal with shared covariances, the sufficient statistic for [math]\displaystyle{ P(c\mid\vec x) }[/math] are the values of N projections, which are the subspace spanned by the N means, affine projected by the inverse covariance matrix. These projections can be found by solving a generalized eigenvalue problem, where the numerator is the covariance matrix formed by treating the means as the samples, and the denominator is the shared covariance matrix. See “Multiclass LDA” above for details.

In addition to the examples given below, LDA is applied in positioning and product management.

In bankruptcy prediction based on accounting ratios and other financial variables, linear discriminant analysis was the first statistical method applied to systematically explain which firms entered bankruptcy vs. survived. Despite limitations including known nonconformance of accounting ratios to the normal distribution assumptions of LDA, Edward Altman's 1968 model is still a leading model in practical applications.

In computerised face recognition, each face is represented by a large number of pixel values. Linear discriminant analysis is primarily used here to reduce the number of features to a more manageable number before classification. Each of the new dimensions is a linear combination of pixel values, which form a template. The linear combinations obtained using Fisher's linear discriminant are called Fisher faces, while those obtained using the related principal component analysis are called eigenfaces.

In marketing, discriminant analysis was once often used to determine the factors which distinguish different types of customers and/or products on the basis of surveys or other forms of collected data. Logistic regression or other methods are now more commonly used. The use of discriminant analysis in marketing can be described by the following steps:

The main application of discriminant analysis in medicine is the assessment of severity state of a patient and prognosis of disease outcome. For example, during retrospective analysis, patients are divided into groups according to severity of disease – mild, moderate and severe form. Then results of clinical and laboratory analyses are studied in order to reveal variables which are statistically different in studied groups. Using these variables, discriminant functions are built which help to objectively classify disease in a future patient into mild, moderate or severe form.

In biology, similar principles are used in order to classify and define groups of different biological objects, for example, to define phage types of Salmonella enteritidis based on Fourier transform infrared spectra,[25] to detect animal source of Escherichia coli studying its virulence factors[26] etc.

This method can be used to separate the alteration zones[clarification needed]. For example, when different data from various zones are available, discriminant analysis can find the pattern within the data and classify it effectively.[27]

Geometric anomalies in higher dimensions lead to the well-known curse of dimensionality. Nevertheless, proper utilization of concentration of measure phenomena can make computation easier.[29] An important case of these blessing of dimensionality phenomena was highlighted by Donoho and Tanner: if a sample is essentially high-dimensional then each point can be separated from the rest of the sample by linear inequality, with high probability, even for exponentially large samples.[30] These linear inequalities can be selected in the standard (Fisher's) form of the linear discriminant for a rich family of probability distribution.[31] In particular, such theorems are proven for log-concave distributions including multidimensional normal distribution (the proof is based on the concentration inequalities for log-concave measures[32]) and for product measures on a multidimensional cube (this is proven using Talagrand's concentration inequality for product probability spaces). Data separability by classical linear discriminants simplifies the problem of error correction for artificial intelligence systems in high dimension.[33]