The multi-mission radioisotope thermoelectric generator (MMRTG) is a type of radioisotope thermoelectric generator (RTG) developed for NASA space missions[1] such as the Mars Science Laboratory (MSL), under the jurisdiction of the United States Department of Energy's Office of Space and Defense Power Systems within the Office of Nuclear Energy. The MMRTG was developed by an industry team of Aerojet Rocketdyne and Teledyne Energy Systems.

Space exploration missions require safe, reliable, long-lived power systems to provide electricity and heat to spacecraft and their science instruments. A uniquely capable source of power is the radioisotope thermoelectric generator (RTG) – essentially a nuclear battery that reliably converts heat into electricity.[2] Radioisotope power has been used on eight Earth orbiting missions, eight missions to the outer planets, and the Apollo missions after Apollo 11 to the Moon. The outer Solar System missions are the Pioneer 10 and 11, Voyager 1 and 2, Ulysses, Galileo, Cassini and New Horizons missions. The RTGs on Voyager 1 and Voyager 2 have been operating since 1977.[3] In total, over the last four decades, 26 missions and 45 RTGs have been launched by the United States.

Solid-state thermoelectric couples convert the heat produced by the natural decay of the radioisotope plutonium-238 to electricity.[4] The physical conversion principle is based on the Seebeck effect, obeying one of the Onsager reciprocal relations between flows and gradients in thermodynamic systems. A temperature gradient generates an electron flow in the system. Unlike photovoltaic solar arrays, RTGs are not dependent upon the solar energy, so they can be used for deep space missions.

In June 2003, the Department of Energy (DOE) awarded the MMRTG contract to a team led by Aerojet Rocketdyne. Aerojet Rocketdyne and Teledyne Energy Systems collaborated on an MMRTG design concept based on a previous thermoelectric converter design, SNAP-19, developed by Teledyne for previous space exploration missions.[5] SNAP-19s powered Pioneer 10 and Pioneer 11 missions[4] as well as the Viking 1 and Viking 2 landers.

The MMRTG design incorporates PbTe/TAGS thermoelectric couples (from Teledyne Energy Systems), where TAGS is an acronym designating a material incorporating tellurium (Te), silver (Ag), germanium (Ge) and antimony (Sb). The MMRTG is designed to produce 125 W electrical power at the start of mission, falling to about 100 W after 14 years.[6] With a mass of 45 kg[7] the MMRTG provides about 2.8 W/kg of electrical power at beginning of life.

The MMRTG design is capable of operating both in the vacuum of space and in planetary atmospheres, such as on the surface of Mars. Design goals for the MMRTG included ensuring a high degree of safety, optimizing power levels over a minimum lifetime of 14 years, and minimizing weight.[2] 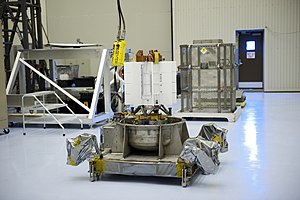 Curiosity, the MSL rover that was successfully landed in Gale Crater on August 6, 2012, uses one MMRTG to supply heat and electricity for its components and science instruments. Reliable power from the MMRTG will allow it to operate for several years.[2]

On February 20, 2015, a NASA official reported that there is enough plutonium available to NASA to fuel three more MMRTGs like the one used by the Curiosity rover.[8][9] One is already committed to the Mars 2020 and its Perseverance rover.[8] The other two have not been assigned to any specific mission or program,[9] and could be available by late 2021.[8]

A MMRTG was successfully launched into space on July 30, 2020, aboard the Mars 2020 mission, and is now being used to supply the scientific equipment on the Perseverance rover with heat and power. The MMRTG used by this mission is the F-2 built by Teledyne Energy Systems, Inc. and Aerojet Rocketdyne under contract with the US Department of Energy (DOE) with a lifespan of up to 17 years.[10]

The upcoming NASA Dragonfly mission to Saturn's moon Titan will use one of the two MMRTGs for which the Aerojet Rocketdyne/Teledyne Energy Systems team has recently received a contract.[11] The MMRTG will be used to charge a set of lithium ion batteries, and then use this higher-power-density supply to fly a quad helicopter in short hops above the surface of the moon.[12]