Peace Vallis is an ancient stream valley on the northern rim of Gale Crater on the planet Mars. It is notable for its associated alluvial fan which lies near the Mars Science Laboratory Curiosity landing site (Bradbury Landing). The valley and alluvial fan provide evidence for geologically recent fluvial activity[2][3] and sustained water flow[4] on Mars. Recent high-resolution orbital images of Peace Vallis and its watershed also suggest that at least one glacial episode affected Gale crater.[5] All of this evidence has implications for the history of water on Mars and the planet's long-term habitability.[6] Understanding Peace Vallis and its fan also provides geologic context for the rocks observed on the ground by the Curiosity rover.[7]

Gale crater itself is a 154-km-diameter impact crater that straddles the martian hemispheric dichotomy between the heavily cratered southern highlands and the lower elevation plains (Elysium Planitia) to the north. Gale crater is noteworthy for its enigmatic 5-km-high crescent-shaped central mound, Aeolis Mons (known informally as Mt. Sharp). The crater is late Noachian or Early Hesperian in age (approximately 3.65 to 3.55 billion years old).[9]

The northern rim of Gale Crater is heavily eroded and hosts a number of geomorphic features indicating the effects of flowing water. These include valleys, gullies, and canyons; sinuous ridges interpreted to be inverted channels; and alluvial fan-like mesas.[10] Peace Vallis and its alluvial fan is the largest and best studied of these fluvial features in northern Gale Crater.

Peace Vallis is named after the Peace River in Alberta and British Columbia, Canada. The name was adopted by the International Astronomical Union (IAU) on September 26, 2012. Vallis is the Latin word for valley.[1]

Peace Vallis is a valley network characterized by a branching (dendritic) pattern of tributary valleys that resembles river drainage basins on Earth. They are common on the older heavily cratered regions of Mars. Most planetary scientists agree that valley networks were formed by flowing water, but the source of the water is still debated.[11] Some argue that rainfall on a warm and wet early mars produced them.[12] Others have suggested they were produced by mass wasting,[13] spring sapping,[14] or from snowmelt[15] on an ancient Mars whose climate was dry and cold much like today's.

The Peace Vallis drainage basin (or catchment) covers an area of about 1,500 km2 (579 mi2). This area sits 1,300 m (4,265 ft)[5] above the crater floor and consists of gently sloping plains interspersed with hills roughly 100 to 350 m (328 to 1,148 ft) high. These irregular hills are mostly mantled with debris that appear to be some combination of aeolian deposits and colluvium.[16] Erosion of the watershed surface has produced a mottled scoured appearance, suggesting mobilization and transport of sediments into topographic lows. 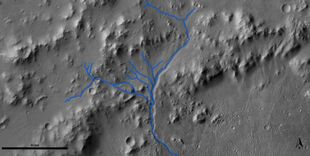 Main valley and tributaries of Peace Vallis (shown in blue). 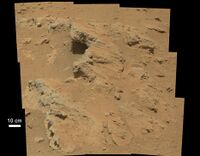 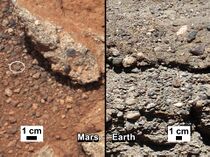 "Link" rock outcrop on Mars - compared with a terrestrial fluvial conglomerate - suggesting water "vigorously" flowing in a stream.
Curiosity rover on the way to Glenelg (September 26, 2012).

Curiosity rover landed near the end of the Peace Vallis fan. Peace Vallis fan covers 80 km2 (31 sq mi) and obtained water from an area of 730 km2 (280 sq mi). Peace Vallis enters Gale Crater through a 15 km-wide (9.3 mi) gap in its rim. Calculations suggest that the fan has an average thickness of 9 m (30 ft). Numerous inverted channels are visible on the western surface of the fan. Runoff through Peace Vallis that made the fan is estimated to be between 600 and 6,000 m (0.37 and 3.73 mi); therefore a hydrologic cycle probably lasted at least thousands of years. The water that flowed in Peace Vallis is believed to be from precipitation, possibly in the form of snow.[16]