Jezero on the edge of the Isidis basin

Jezero[lower-alpha 1] is a crater on Mars in the Syrtis Major quadrangle,[3] about 45.0 km (28.0 mi) in diameter. Thought to have once been flooded with water, the crater contains a fan-delta deposit rich in clays.[4] The lake in the crater was present when valley networks were forming on Mars. Besides having a delta, the crater shows point bars and inverted channels. From a study of the delta and channels, it was concluded that the lake inside the crater probably formed during a period in which there was continual surface runoff.[5]

In 2007, following the discovery of its ancient lake, the crater was named after Jezero, Republika Srpska, Bosnia and Herzegovina, one of several eponymous towns in the country.[6][7] In some Slavic languages, the word jezero[lower-alpha 2] means 'lake'.[8]

In November 2018, it was announced that Jezero had been chosen as the landing site for the rover Perseverance as part of NASA's Mars 2020 mission.[9][10][11] In November 2020, evidence of boulder falls was found on the slopes of the delta deposits that the rover is planned to explore, on the wall of Jezero itself as well as on the wall of Dacono,[12] a small crater 2 km (1.2 mi) in diameter on the floor of Jezero.[13] Perseverance successfully landed in the crater on 18 February 2021.[14] On 5 March 2021, NASA named the landing site of the rover Octavia E. Butler Landing.[15]

In December 2021, NASA announced that some of the rocks in Jezero in Seitah were igneous. When examined closely, rocks revealed the mineral olivine surrounded by the mineral pyroxene. That arrangement happens in thick magma bodies and geologists call this type of texture "Cumulate."[17] Carbonate and sulfate minerals were also detected which means that the rocks had been altered by water.[18] The instrument used for this analysis was the Planetary Instrument for X-ray Lithochemistry (PIXL).[19]

File:Jezero Crater Formation by asteroid impact.webm In a March 2015 paper, researchers from Brown University described how an ancient Martian lake system existed in Jezero. The study advanced the idea that water filled the crater at least two separate times.[20] There are two channels on the northern and western sides of the crater that probably supplied it with water; each of these channels has a delta-like deposit where sediment was carried by water and deposited in the lake.[21] Craters of a given diameter are expected to have a certain depth; a depth less than expected means sediment entered the crater.[22] Calculations suggest that the crater may hold about 1 kilometre (0.62 mi) of sediments. Most of the sediments may have been brought in by channels.[23]

Since it is believed that the lake was long-lived, life may have developed in the crater; the delta may have required a period of one to ten million years to form.[23] Clay minerals have been detected in and around the crater.[24][25][26] The Mars Reconnaissance Orbiter identified smectite clays.[27] Clays form in the presence of water, so this area probably once held water and maybe life in ancient times. The surface in places is cracked into polygonal patterns; such shapes often form when clay dries out. The image below depicts examples of these patterns, and a channel that carried water and sediments into the crater.[3] 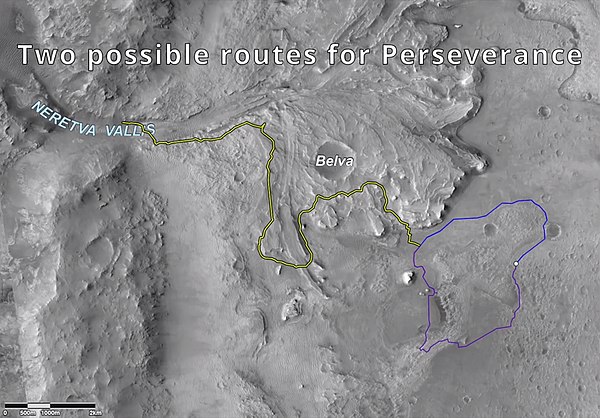 Possible routes for Perseverance for exploration and study in Jezero 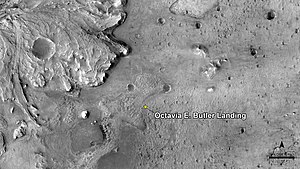 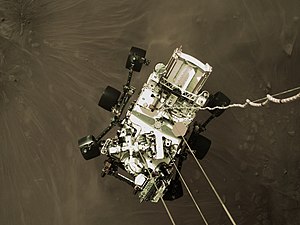 Perseverance landing in Jezero as seen from the skycrane deploying it

Jezero, once considered a site for the Mars Science Laboratory, was later proposed as a landing site for NASA's Mars 2020 mission, carrying the rover Perseverance and the helicopter Ingenuity.[28][29] In early 2017 it was selected as one of the top three candidate landing sites, along with northeast Syrtis, 30 km (19 mi) to the southwest.[30]

A primary aim of the Mars 2020 mission is to search for signs of ancient life. It is hoped that a later mission could then return Martian samples from sites identified as probably containing remains of life. To safely bring the craft down, a 12-mile (19 km) wide, smooth, flat circular area is needed. Geologists hope to examine places where water once ponded.[31] They would like to examine sediment layers.

In November 2018, Jezero was selected as the target landing site for Mars 2020.[32] On 18 February 2021, Perseverance landed successfully in the crater.[33] On 19 April 2021, Ingenuity performed the first powered flight on Mars from Jezero, which received the commemorative ICAO airport code JZRO.[34]

A ESA–NASA team produced a three-launch architecture concept for a Mars sample return, which uses the Mars 2020 rover to cache small samples, a two-stage, solid-fueled Mars ascent stage to send it into orbit, and an orbiter to rendezvous with it above Mars and take it to Earth.[35] Solar-electric propulsion could allow a one launch sample return instead of three.[36] So, after a launch in July 2026, a lander with a Mars ascent rocket (developed by NASA) and a sample collection rover (developed by ESA) (or may be on two separate landers or a dual lander probe) lands exactly near the Mars 2020 rover in Jezero Crater in August 2028. The new rover collects the samples left behind by Mars 2020 and delivers them to the ascent rocket. If Mars 2020 is still operational, it could also deliver samples to the landing site. Once loaded with the samples, the Mars ascent rocket will launch with the sample return canister in spring 2029 and reach a low Mars orbit. The lander would bring a small and simple "fetch rover", whose sole function would be to retrieve the sample containers from the caches left on the surface or directly from the Perseverance rover, and return them to the lander where it would be loaded onto the MAV for delivery to the orbiter and then be sent to Earth.[37][38]

This design would ease the schedule of the whole project, giving controllers time and flexibility to carry out the required operations. Furthermore, the program could rely on the successful landing system developed for the Mars Science Laboratory, avoiding the costs and risks associated with developing and testing yet another landing system from scratch.[38] Even NASA may think of changing the Sample Return Lander into a two-lander or dual lander probe mission, one carrying a rover to collect samples and the other carrying the Complex Mars Ascent Vehicle that will launch the sample container into orbit. In addition, NASA may change the solar panels on lander with Radioisotope Thermoelectric Generator, a nuclear power source,or at least the lander with the MAV in case if fetch rover is launched separately, to ensure sufficient power and to keep the rocket’s propulsion system from getting too cold, thus ensuring a longer lifetime, better thermal protection and safe operation even if they are carried in Mars Global Dust Storm Season, but these changes are still to be clarified by NASA. 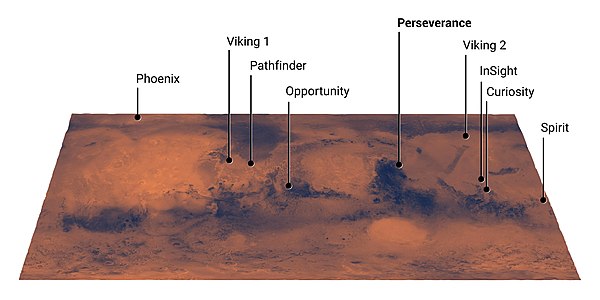