On June 1, 2017, NASA reported that an ancient striated lake had existed in Gale crater that could have been favorable for microbial life.[17][18][19]

The mountain appears to be an enormous mound of eroded sedimentary layers sitting on the central peak of Gale. It rises 5.5 km (18,000 ft) above the northern crater floor and 4.5 km (15,000 ft) above the southern crater floor, higher than the southern crater rim. The sediments may have been laid down over an interval of 2 billion years,[20] and may have once completely filled the crater. Some of the lower sediment layers may have originally been deposited on a lake bed,[20] while observations of possibly cross-bedded strata in the upper mound suggest aeolian processes.[21] However, this issue is debated,[22][23] and the origin of the lower layers remains unclear.[21] If katabatic wind deposition played the predominant role in the emplacement of the sediments, as suggested by reported 3 degree radial slopes of the mound's layers, erosion would have come into play largely to place an upper limit on the mound's growth.[24][25]

On December 8, 2014, a panel of NASA scientists discussed (archive 62:03) the latest observations of Curiosity about how water may have helped shape the landscape of Mars, including Aeolis Mons, and had a climate long ago that could have produced long-lasting lakes at many Martian locations.[26][27][28]

On October 8, 2015, NASA confirmed that lakes and streams existed in Gale crater 3.3 - 3.8 billion years ago delivering sediments to build up the lower layers of Mount Sharp.[29][30]

On February 1, 2019, NASA scientists reported that Curiosity had determined, for the first time, the density of Mount Sharp in Gale crater, thereby establishing a clearer understanding of how the mountain was formed.[31][32]

Discovered in the 1970s, the mountain remained unnamed for several decades. When Gale crater became a candidate landing site, the mountain was given various labels e.g. in 2010 a NASA photo caption called it "Gale crater mound".[40] In March 2012, NASA unofficially named it "Mount Sharp", after American geologist Robert P. Sharp.[1][41]

Comparison of Mount Sharp (Aeolis Mons) to the sizes of three large mountains on Earth.

Since 1919 the International Astronomical Union (IAU) has been the official body responsible for planetary nomenclature. Under its long-established rules for naming features on Mars, mountains are named after the classical albedo feature in which they are located, not after people. In May 2012 the IAU officially named the mountain Aeolis Mons after the Aeolis albedo feature.[42] It also gave the name Aeolis Palus to the plain located on the crater floor between the northern wall of Gale and the northern foothills of the mountain.[1][43][44][45] The IAU's choice of name is supported by the United States Geological Survey.[44] Martian craters are named after deceased scientists, so in recognition of NASA and Sharp, at the same time the IAU named "Robert Sharp", a large (150 km (93 mi) diameter), crater located about 260 km (160 mi) west of Gale.[46]

NASA and the European Space Agency[47] continue to refer to the mountain as "Mount Sharp" in press conferences and press releases. This is similar to their use of other informal names, such as the Columbia Hills near one of the Mars Exploration Rover landing sites.

In August 2012, the magazine Sky & Telescope ran an article explaining the rationale of the two names and held an informal poll to determine which one was preferred by their readers. Over 2700 people voted, with Aeolis Mons winning by 57% to Mount Sharp's 43%.[41]

Geology map – from the crater floor in Aeolis Palus up the slopes of Aeolis Mons
(September 11, 2014).

Rocks in "Hidden Valley" near the "Pahrump Hills" on the slopes of Aeolis Mons as viewed from Curiosity
(September 11, 2014; white balanced).

On December 16, 2014, NASA reported detecting, based on measurements by the Curiosity rover, an unusual increase, then decrease, in the amounts of methane in the atmosphere of the planet Mars; as well as, detecting Martian organic chemicals in powder drilled from a rock by the rover. Also, based on deuterium to hydrogen ratio studies, much of the water at Gale Crater on Mars was found to have been lost during ancient times, before the lakebed in the crater was formed; afterwards, large amounts of water continued to be lost.[48][49][50]

On June 1, 2017, NASA reported that the Curiosity rover provided evidence of an ancient lake in Gale crater on Mars that could have been favorable for microbial life; the ancient lake was stratified, with shallows rich in oxidants and depths poor in oxidants; and, the ancient lake provided many different types of microbe-friendly environments at the same time. NASA further reported that the Curiosity rover will continue to explore higher and younger layers of Mount Sharp in order to determine how the lake environment in ancient times on Mars became the drier environment in more modern times.[17][18][19]

On April 11, 2019, NASA announced that Curiosity had drilled into, and closely studied, a "clay-bearing unit" which, according to the rover Project Manager, is a "major milestone" in Curiosity's journey up Mount Sharp.[53] 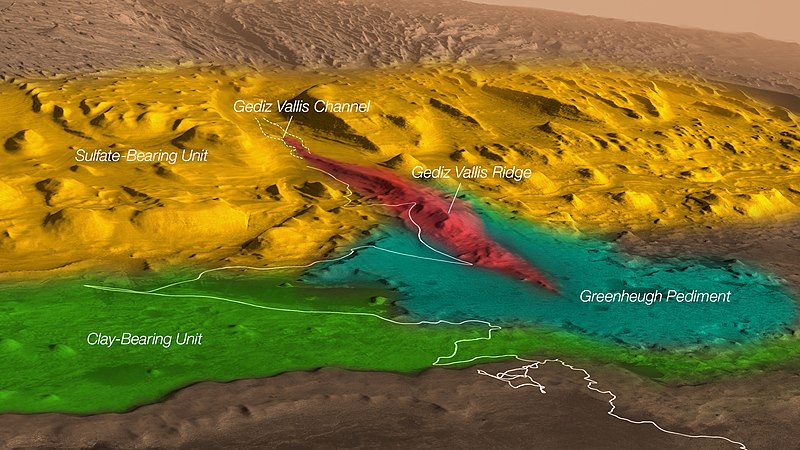 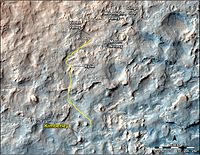 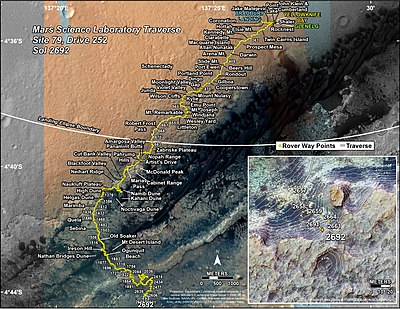 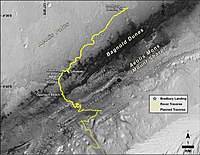 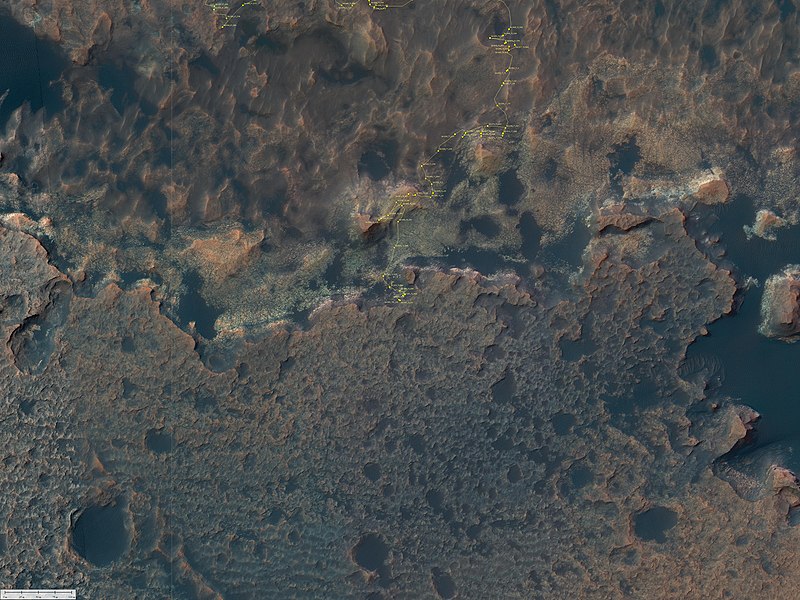