An archaellum (plural: archaella, formerly archaeal flagellum) is a unique whip-like structure on the cell surface of many archaea. The name was proposed in 2012 following studies that showed it to be evolutionarily and structurally different from the bacterial and eukaryotic flagella. The archaellum is functionally the same – it can be rotated and is used to swim in liquid environments. The archaellum was found to be structurally similar to the type IV pilus.[1][2]

In 1977, archaea were first classified as a separate group of prokaryotes in the three-domain system of Carl Woese and George E. Fox, based on the differences in the sequence of ribosomal RNA (16S rRNA) genes.[3][4] This domain possesses numerous fundamental traits distinct from both the bacterial and the eukaryotic domains. Many archaea possess a rotating motility structure that at first seemed to resemble the bacterial and eukaryotic flagella. The flagellum (Latin for whip) is a lash-like appendage that protrudes from the cell. In the last two decades, it was discovered that the archaeal flagella, although functionally similar to bacterial and eukaryotic flagella, structurally resemble bacterial type IV pili.[5][6][7] Bacterial type IV pili are surface structures that can be extended and retracted to give a twitching motility and are used to adhere to or move on solid surfaces; their "tail" proteins are called pilins.[8][9] To underline these differences, Ken Jarrell and Sonja-Verena Albers proposed to change the name of the archaeal flagellum to archaellum.[10] 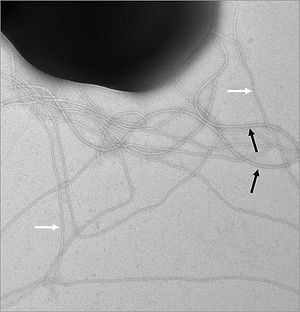 Most proteins that make up the archaellum are encoded within one genetic locus. This genetic locus contains 7-13 genes which encode proteins involved in either assembly or function of the archaellum.[7] The genetic locus contains genes encoding archaellins (flaA and flaB)[lower-alpha 1] - the structural components of the filament - and motor components (flaI, flaJ, flaH). The locus furthermore encodes other accessory proteins (flaG, flaF, flaC, flaD, flaE, and flaX). FlaX is only found in Crenarchaeota and FlaCDE (which can exist as individual proteins or as fusion proteins) in Euryarchaeotes. FlaX and FlaCDE are thought to have similar functions, and an unknown protein is also thought to fulfil the same function in Thaumarchaeota.

The archaellum operon used to be historically known as fla (from "flagellum"), but in order to avoid confusion with the bacterial flagellum and to be consistent with the remaining nomenclature (archaellum, archaellins), it has been recently proposed to be renamed to arl (archaellin-related genes) [11]. Consequently, the name of the genes is also differen (e.g., flaJ is now arlJ). Therefore, in the specialised literature both nomenclatures can be found, with the arl nomenclature being increasingly more used since 2018.

Genetic analysis in different archaea revealed that each of these components is essential for assembly of the archaellum.[12][13][14][15][16] Whereas most of the fla-associated genes are generally found in Euryarchaeota, one or more of these genes are absent from the fla-operon in Crenarchaeota. The prepilin peptidase (called PibD in crenarchaeota and FlaK in euryarchaeota) is essential for the maturation of the archaellins and is generally encoded elsewhere on the chromosome.[17]

Functional characterization has been performed for ArlI, a Type II/IV secretion system ATPase super-family member[18] and PibD/FlaK.[17][19][20] FlaI forms a hexamer which hydrolyses ATP and most likely generates energy to assemble the archaellum and to power its rotation. PibD cleaves the N-terminus of the archaellins before they can be assembled. ArlH (PDB: 2DR3​) has a RecA-like fold and inactive ATPase domains. ArlH and ArlJ are the two other core components that together with ArlI form a core platform/motor. ArlX acts as a scaffold around the motor in Crenarchaeota.[21] ArlF and ArlG are potentially part of the stator of the archaellum motor; ArlF binds the S-layer, and ArlG forms filaments that seem to be "capped" by ArlF. Therefore, these two proteins potentially act together to attach the motor complex to the S-layer and to provide a rigid structure against which the rotating components of the motor - likely ArlJ - can rotate [22][23].

The genes coding for arlC, arlD, and arlE are only present in Euryarchaeota and interact with chemotaxis proteins (e.g., CheY, CheD and CheC2, and the archaea-specific CheF) to sense environmental signals (such as exposure to light of specific wavelength, nutrient conditions etc.).[24][25]

In the 1980s, Dieter Oesterhelt’s laboratory showed for the first time that haloarchaea switch the rotation of their archaellum from clockwise to counterclockwise upon blue light pulses.[26][27] This led microbiologists to believe that the archaeal motility structure is not only functionally, but also structurally reminiscent of bacterial flagella. Nevertheless, evidence started to build up indicating that archaella and flagella shared their function, but not their structure and evolutionary history. For example, in contrast to flagellins, archaellins (the protein monomers which form the archaellum filament) are produced as preproteins which are processed by a specific peptidase prior to assembly. Their signal peptide is homologous to class III signal peptides of type IV prepilins that are processed in Gram-negative bacteria by the peptidase PilD.[28] In Crenarchaeota PibD and in euryarchaeota FlaK are PilD homologs, whch are essential for the maturation of the archaellins. Furthermore, archaellins are N-glycosylated[29][30] which has not been described for bacterial flagellins, where O-linked glycosylation is evident.

Another stark difference between the archaellum and the flagellum is the diameter of their filaments. While the bacterial flagellum is hollow, which allows flagellin monomers to travel through its interior to the tip of the growing filament, the archaellum filament is thiner, precluding the passage of archaellin monomers [31][32][33][34][35]. This evidence suggested that the mechanism of assembly of the archaellum is more similar to the assembly mechanism observed in type IV pili (in which the monomers assemble at the bottom of the growing filament) than the assembly mechanism of flagella via a type III secretion system[36][37].

The similarities between archaella and T4P became more obvious with the identification of two archaella motor complex proteins that have homologues in T4P and type IV and II secretion systems. Specifically, ArkJ and ArlI are homologous to PilC and PilB/PilT, respectively. ArlJ is a membrane proteins for which little is structurally and functionally known, and ArlI is the only ATPase found in the archaellum operon, thus suggesting that this protein powers the assembly and the rotation of the filament [38][7][18].

Despite the limited number of details presently available regarding the structure and assembly of archaellum, it has become increasingly evident from multiple studies that archaella play important roles in a variety of cellular processes in archaea. In spite of the structural dissimilarities with the bacterial flagellum, the main function thus far attributed for archaellum is swimming in liquid[16][39][40] and semi-solid surfaces.[41][42] Increasing biochemical and biophysical information has further consolidated the early observations of archaella mediated swimming in archaea. Like the bacterial flagellum,[43][44] the archaellum also mediates surface attachment and cell-cell communication.[45][46] However, unlike the bacterial flagellum archaellum has not shown to play a role in archaeal biofilm formation.[47] In archaeal biofilms, the only proposed function is thus far during the dispersal phase of biofilm when archaeal cells escape the community using their archaellum to further initiate the next round of biofilm formation. Also, archaellum have been found to be able to have a metal-binding site.[31]